A knitted beanie is enhanced by twisting stitches in the ribbing

This week we’re looking at Universal Yarns Major. Yesterday, I shared a free beanie hat pattern to knit and today we’ll look at two essential finishes on a hat, the ribbing and pompoms.

If you knit a hat from the top down, then you could say that the ribbing is truly a finish! But working bottom up, it’s a little ironic to call the ribbing a finish, when you start with it first. Nonetheless, good ribbing can make or break the headband part of a beanie or toque. 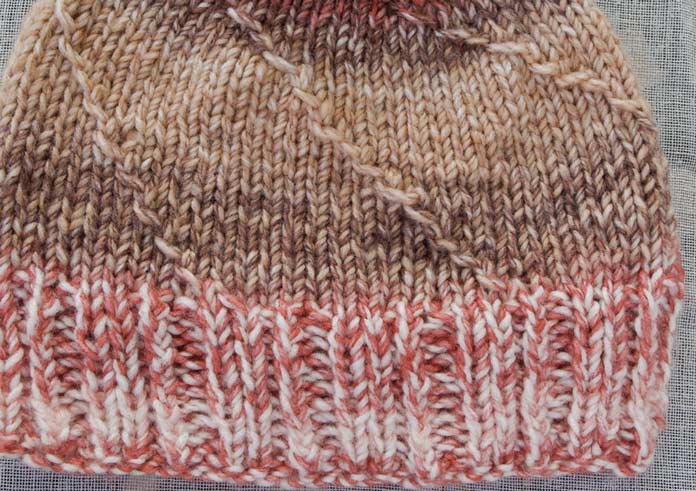 On the beanie pattern I shared with you yesterday, I used a ribbing that isn’t really reversible. You can turn the band up and over the other fabric, but the exposed ribbing won’t look like [K2, p1, ktbl, p1] ribbing.

But reversibility isn’t always important. It’s key to have a stretchy cast-on edge (or cast-off for a top-down hat) so that the wearer doesn’t suffer pressure marks from that edge. To compensate for a relaxed cast-on, you need a stretchy ribbing that holds the hat in place. Enter twisted stitches.

In this hat I only twist one column of knit stitches in every pattern repeat, and I don’t twist the purl stitches, but if you were to do that, your ribbing would have a real sturdy grip…I just didn’t want to purl in the back strand that often.

I knit another swatch with two different ribbing patterns.

Knitting in the back loop of each knit stitch creates a lifted column and a tighter band for your beanie. 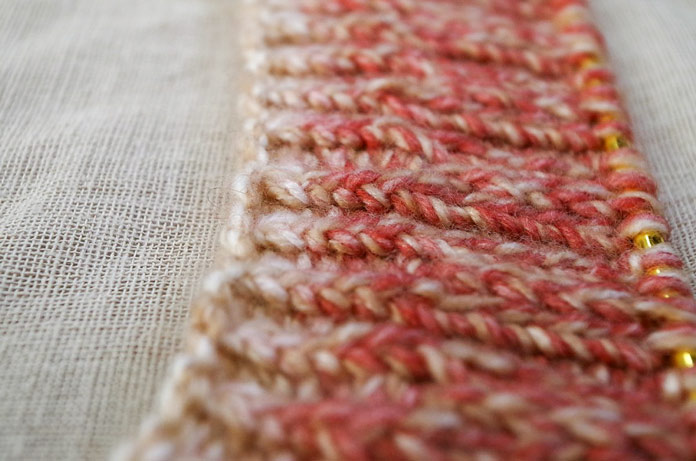 The second type of ribbing involves a purl 1, knit 3 repeat. Then, just for the fun of it, the middle knit stitch in the group of three is twisted every odd round and slipped every even round. This creates a very slight ‘mounding’ of the three-knit-stitches group when the ribbing is relaxed, but creates a nice ‘hold’ on the wearer’s head.

Centered twisted and slipped stitches give this 3×1 ribbing a new look and feel.

I invite you to try these different ribbings.

Version 1 over an even number of stitches

Version 2 over a multiple of 4 stitches 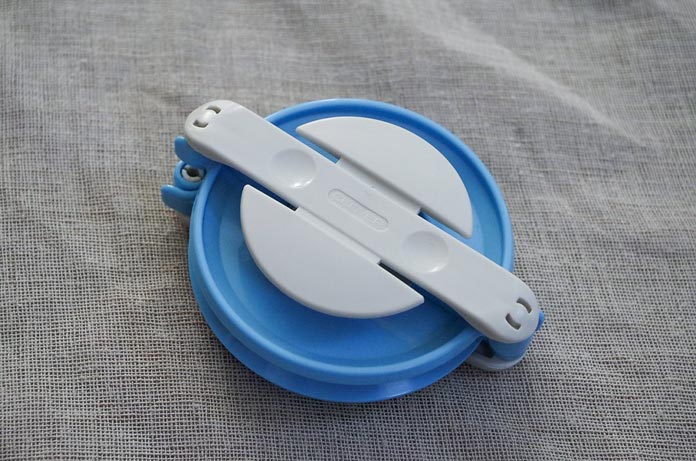 In addition to the ribbing being a key element to good finishing, hats do benefit from a topper. What’s more fun than a pompom?

Granted, they aren’t for everyone, but Clover has made a new (to me at least) pompom maker that’s so much nicer than the cardboard circles I used to make, that I couldn’t help but add one to this beanie. I think I’ll be yarn bombing lots of things with pompoms if I’m not careful. 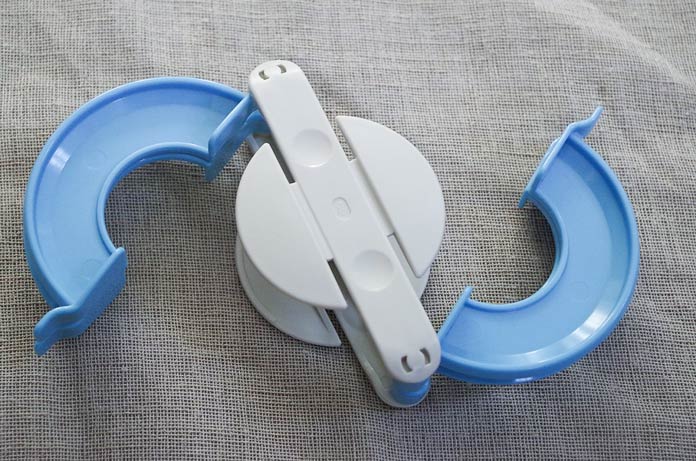 The Clover pompom maker has two halves that each open up to reveal curved arms.

Here’s my step by step written instructions on how to use Clover Pom-Pom Maker. I also included a short video at the end of this post, if you prefer to watch it.

To use this pompom maker, you simply open up the C-curve shaped arms. 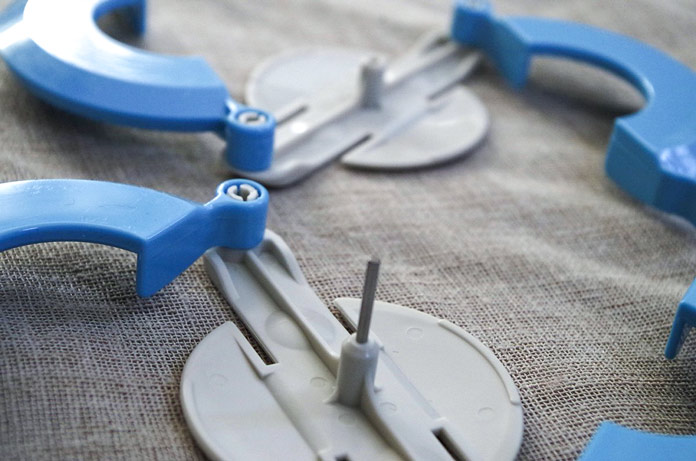 The two halves of the Clover pompom maker. The metal pin is the axis and fits into the center core of the other half.

The device does come apart, which is essential at the end, but for now, the two halves should be together. Insert the metal pin into the center core of the opposite half. 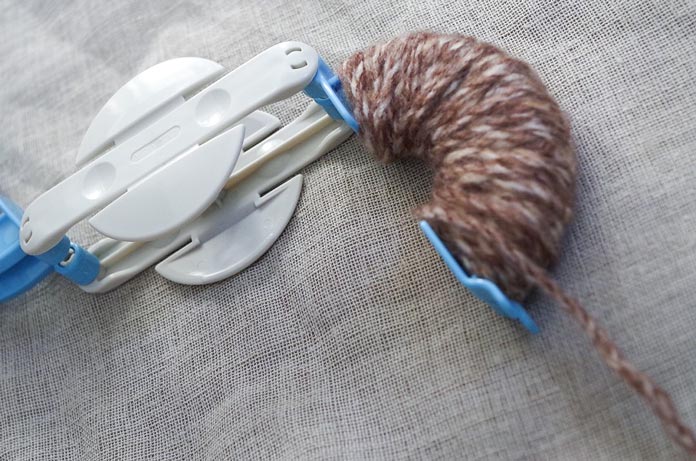 With no fuss, you wrap the yarn around the C-curve arm, ensuring that you don’t go over the ends, and that you layer the same number of wraps evenly several times.

Wrap the yarn around one of the C-curve arm, going back and forth, distributing the yarn evenly and for 3 to 4 layers worth of strands.

You’ll want to end the first wrapping session at the outer tip of the arm. Then fold the arm into the middle so that the yarn is just at the inner curve of the 2nd arm. 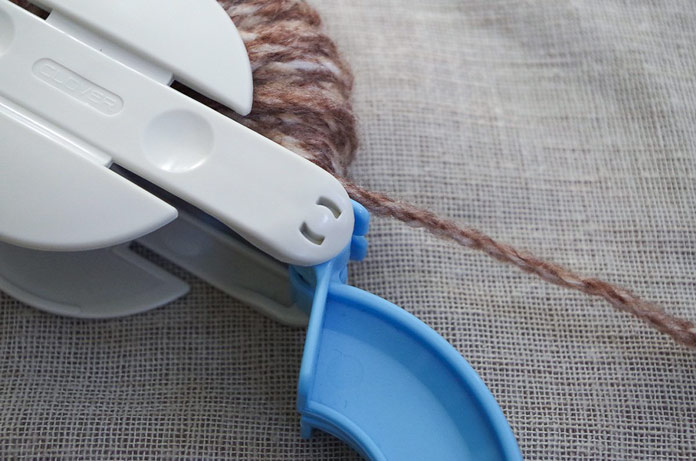 First curved arm is folded back in place so you can wrap the second curved arm. 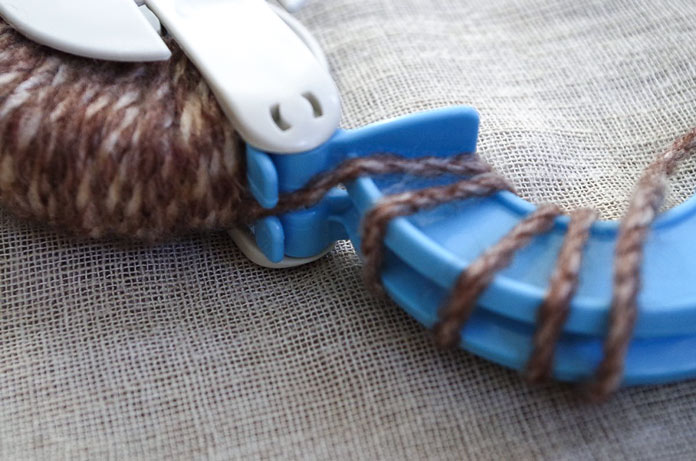 If you’ve ended your wrapping at the right point of the first arm, you’ll be set to go on the second one.

Then you wrap evenly around that semi-circle until roughly the same amount of yarn has been wrapped on the second arm. 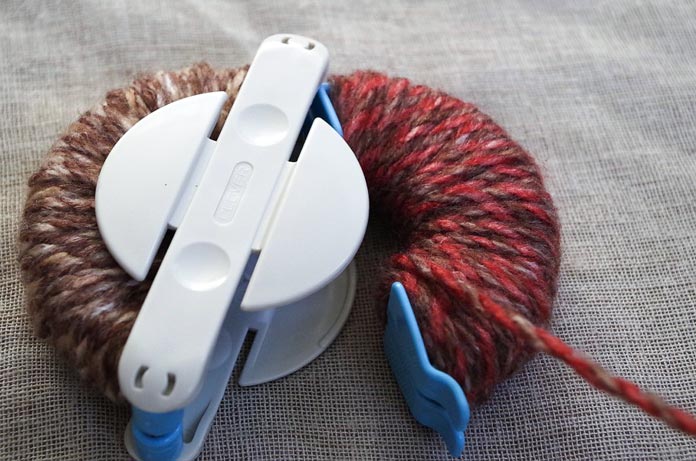 Cut the yarn and fold both arms into the center of the device and it will look like a wheel with the yarn being the tread and the device forming the hubcaps. 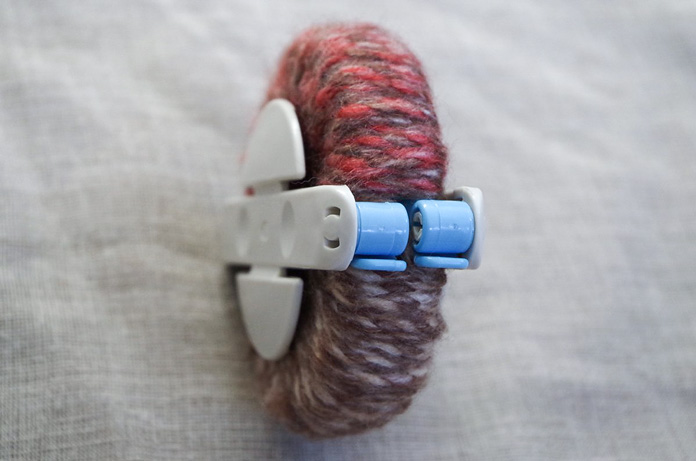 The wrapping done, you’re ready to do the most exciting step of making a pompom. 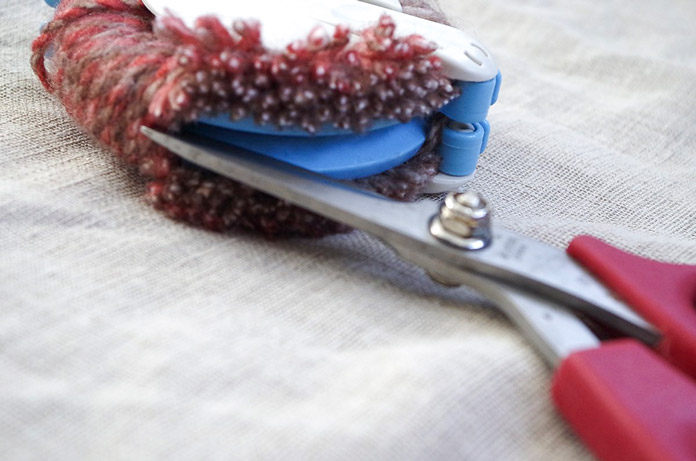 Scissors easily enter the ditch between the two halves of the Clover pompom maker to create the fuzzy ends that will become the pompom.

Insert a good length of yarn in between the two halves of the pompom maker, and tie a knot. 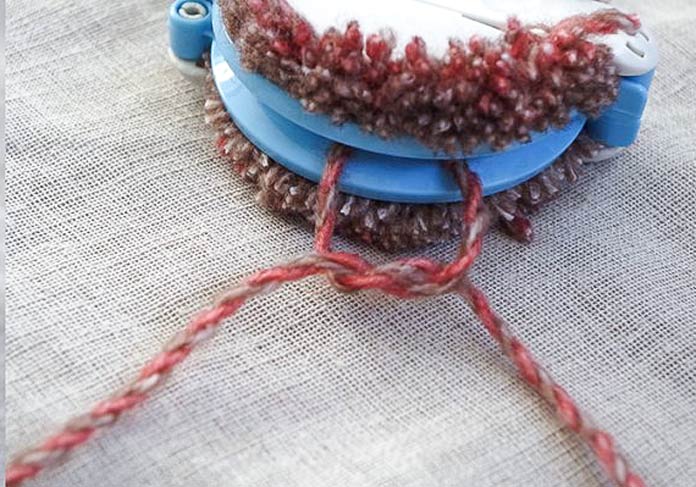 Tie a knot by slipping a good length of yarn in between the gap.

I like to secure all pompoms by using a sturdy cotton thread to tie another length around its core and trim the thread short enough so the ends remain buried inside the furry ball. 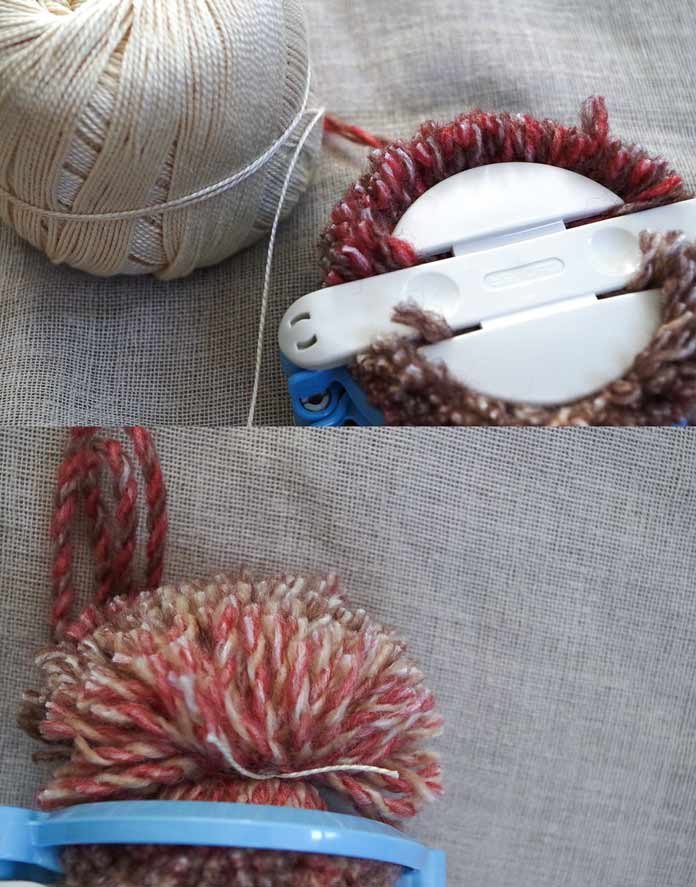 A sturdy cotton or linen string will hold the pompom together better than yarn alone.

Lastly, pull the maker apart completely and holding the yarn ends, comb or massage the pompom into shape.

You may need to trim a few ends of the pompom to clean it up. Don’t be too over exuberant about trimming it or you’ll end up with one that you could have made with a smaller pompom maker! 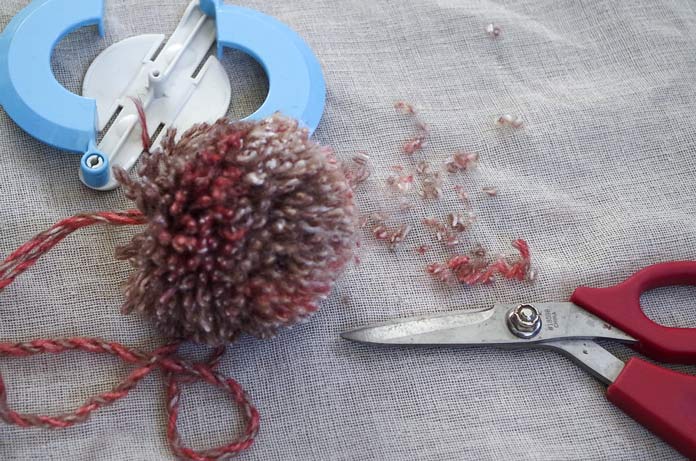 Have fun giving your pompom a haircut! Just don’t over do it!

I attached the pompom to the beanie by threading each end of the tying yarn through a different spot at the top of the beanie, knotting and weaving in the ends on the inside.

The gradient and marled look of Major made the pompom look amazing.

I love the color effect that appears in this format as much as in the knitting itself. Thanks for exploring the merits and uses of Major by Universal Yarn this week. I’m pretty sure I have enough yarn in this huge skein of Major to make another hat. I’ll use a different ribbing, and maybe even a different texture on the body of the hat.

Below is the video I mentioned…Enjoy! 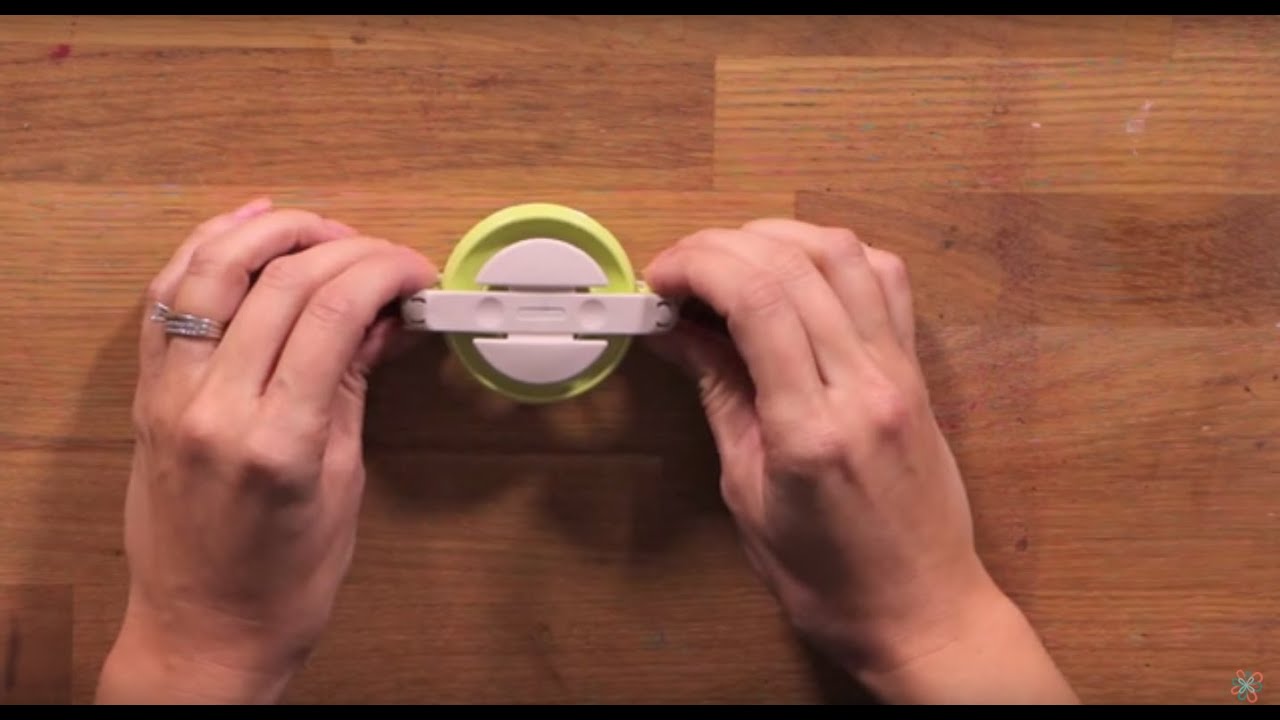 See how to use the Clover Pom-Pom Maker, it takes less than 5 minutes to make it! – YouTube

Pom poms are all the rage in the crafting world. You can add these cute, fluffy balls of yarn to gifts, hats, pillows and MORE! They are so easy to make! Get…

This is part 5 of 5 in this series.
Go back to part 4: Knitting a beanie using marled yarn and THIS spiral textured shaping

Knitting a summertime Tee with waves of...

The jumbo yarn swatch that got away...