Home » Yarns » Consistency in pattern when working in the round

Consistency in pattern when working in the round

This week, I’m knitting with Universal Yarn Penna which is a feathery light blend of baby suri alpaca, fine merino wool, and nylon that exudes a lovely halo.

Today, I’m knitting a cowl that was designed for this yarn. This is a great beginner project for those who are new to knitting with lace, or new to knitting in general. It’s worked in the round using 3 different colors of Penna. I’ve selected Rose Kiss, Raspberry Tart, and Mulberry as my color choices. It’s knit using a simple seed stitch. If you recall from yesterday, knitting seed stitch on large needles creates a lovely textured fabric. The pattern is called Plume, which is so appropriately named given one of the translations for Penna. Here’s where you can download the free pattern for the Plume cowl. 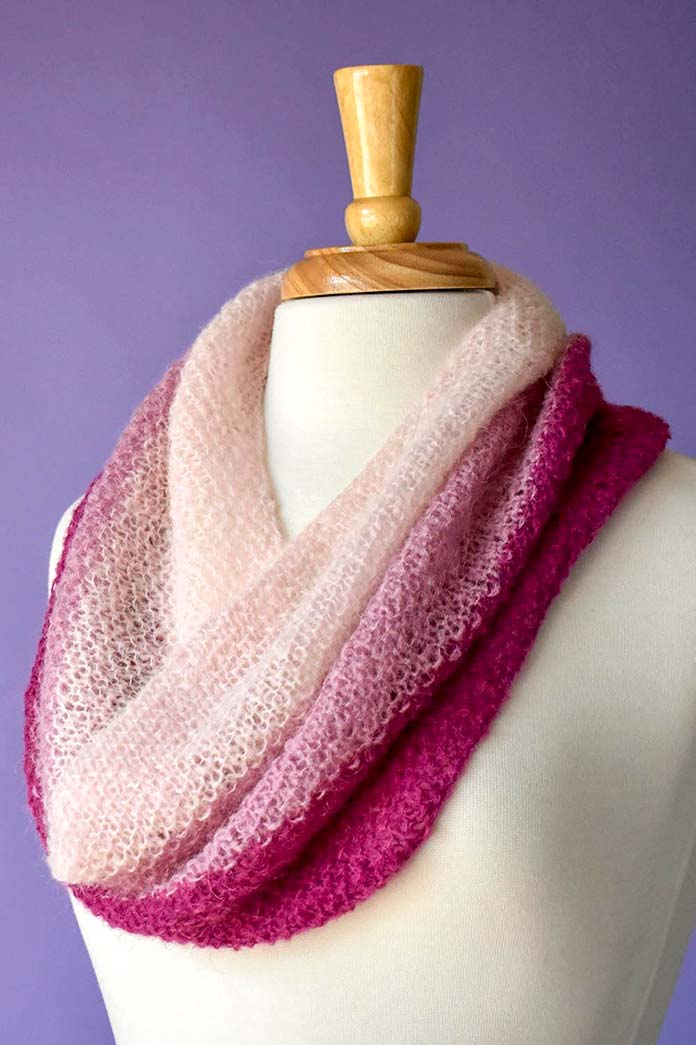 Plume is a free pattern designed for Penna.

Plume calls for using 3 balls of Penna, in the colors of your choice. It’s worked in the round on US 8 [5mm] needles, in seed stitch (K1, P1), however, I did make a couple of adjustments along the way. 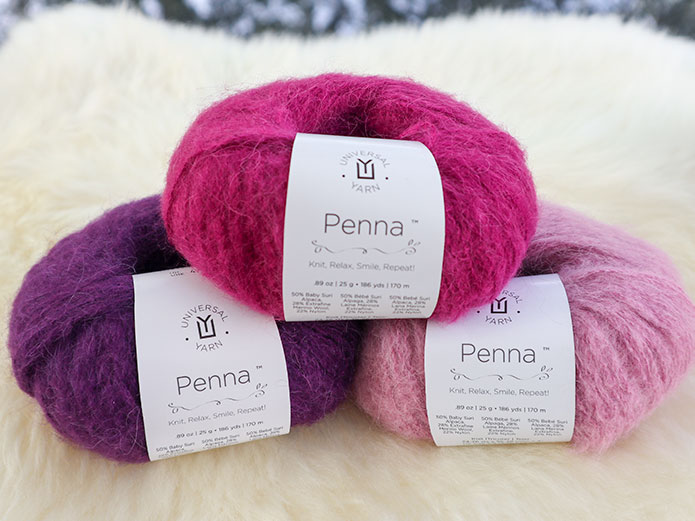 : Rose Kiss, Raspberry Tart, and Mulberry are my color choices for Plume.

The pattern instructs to use an even number of stitches. I’ve learned from experience that you can see the jog from the beginning and ending of the round when working in pattern. It doesn’t show up so much when working in stocking stitch but can be seen in seed stitch. As such, I used an odd number of stitches for my cast on; 125 instead of 124. I must admit, that you’d be hard-pressed to see the jog with this yarn. The muted stitch detail masks it, so consider this a tip for future pattern projects when working in the round.

The pattern is very simple:

If you make it with an odd number of stitches, then you consistently k1, p1 until the color change. It’s that simple.

Speaking of color change, I decided to have a little fun with it. Instead of “Break color A, change to color B”, I joined color B (without breaking color A) and proceeded as follows:

I repeated these two rows 3 more times before dropping color A and continuing with color B. When it was time to change to color C, I did the same process with B and C. It created a very interesting color transition. 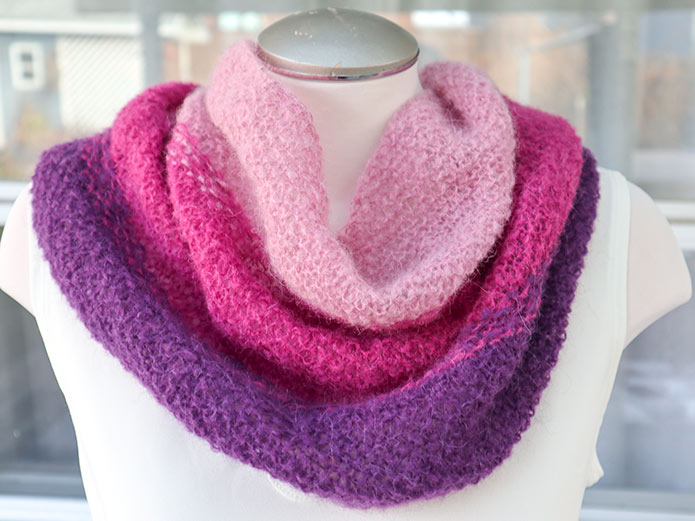 The end result is very pretty and makes for a light and airy accessory. It’s also quite stretchy, which allows you to double wrap it around your neck. I was showing it off to some of my knitting pals during a Zoom call, and double wrapped it. It looked great, but after only a few moments, I had to take it off because it was too warm for indoors. That’s really good to know that it can be doubled up for outside to keep you warm and unwound to wear as a soft and lovely accessory when inside. 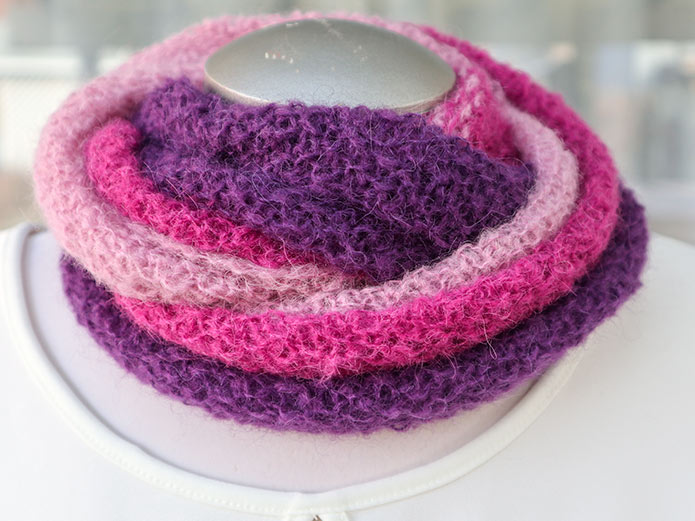 Double wrap Plume around your neck for added warmth.

I was very surprised by how much yarn was still on each ball. I weighed them and discovered that there was 17g leftover, even with the extra rows that I put in for the color change. Each color only used about 8g out of a 25g ball. This means you can easily make 3 cowls out of the 3 balls, make it larger, or double up the strands to make a chunkier version. If a solid color is your preference, you could make this cowl from 1 ball. I’d like to make another one using double strands and a larger needle size; possibly a US 10 [6mm] to keep it open and airy.

As mentioned previously, this is a great beginner project for knitting with lace weight yarn, or if you’re new to knitting. It knits up very quickly and looks lovely, so perhaps you can get one more gift done before Christmas.

Tomorrow, I’m using Penna, combined with Wool Pop to make a hat, but not just any hat – a Raspberry Beret, that will look great with my Plume cowl. I hope you join me as I experiment with one of the endless possibilities by combining two different yarns.

Go back to part 2: Knitting swatches in keeping with an open and airy look

Go to part 4: Combining Penna with another yarn makes for endless possibilities

Knitting swatches in keeping with an open and airy look

Combining Penna with another yarn makes for endless possibilities

Elegance when matching the right pattern with the right...

Combining Penna with another yarn makes for endless possibilities

Knitting swatches in keeping with an open and airy...

The Braid Stitch adds texture to a knitted scarf

Click the image below to read the issue FREE online at any time. PDF download is also available FREE but only for a limited time until January 31st! See all our FREE Magazines HERE.

Adding a picot edging to a lace...

Knitting a classic: cables and ribbing