Knit a cowl by chance with Bamboo Bloom yarn

written by Cynthia MacDougall January 24, 2017
This week we’re working with leftovers from Universal Yarn reviews that were done during 2016. Yesterday we took stock of those yarns, and today, we’re going to work with Bamboo Bloom by Universal Yarn.
In February, 2016, Charles Voth did a yarn review of Universal Yarn’s Bamboo Bloom yarn.  Bamboo Bloom is made up of 48% Bamboo rayon with 8% acrylic, twisted with 44% wool roving. Rice, the color Charles tested, is a soft mix of petal pink and barely-white called Rice. 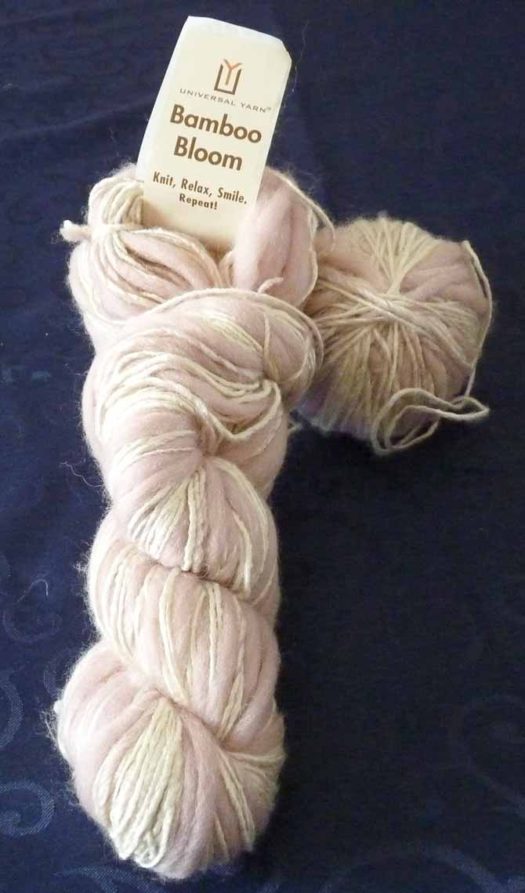 Yarns such as Bamboo Bloom have so much texture, it’s not really practical to add more in the form of eyelets and slipped stitches. But knitting plain-old-plain-old can get a little monotonous for knitters who like a little challenge. Plus, when working in the round, stockinette stitch tends to curl. Solutions for alleviating this include working some rows in knit, some in purl (like Quaker stitch, that creates purl ridges on both sides) or doing a wide (3 x 3 or larger) ribbing, which makes the pattern reversible.
In Charles’ posts, later in the week, he made a cowl based on the numbers in his birthdate. He chose a number of stitches to cast on that was deliberately not a multiple of his number, so that the knits and purls would be staggered at the beginning and end of the rounds.
Reading his post made me think of a scarf I knitted years ago, which was based on the roll of the dice. The pattern was made of six yarns, and two dice. You assigned a number to each yarn, then rolled the dice. The first die told which yarn to use for the row, and the second which stitch to knit (1 and 4 were knit, 2 and 5 were purl, and 3 and 6 were k1, p1 rib). I decided to adapt these two techniques to make a cowl-by-chance.
Here’s what I need: 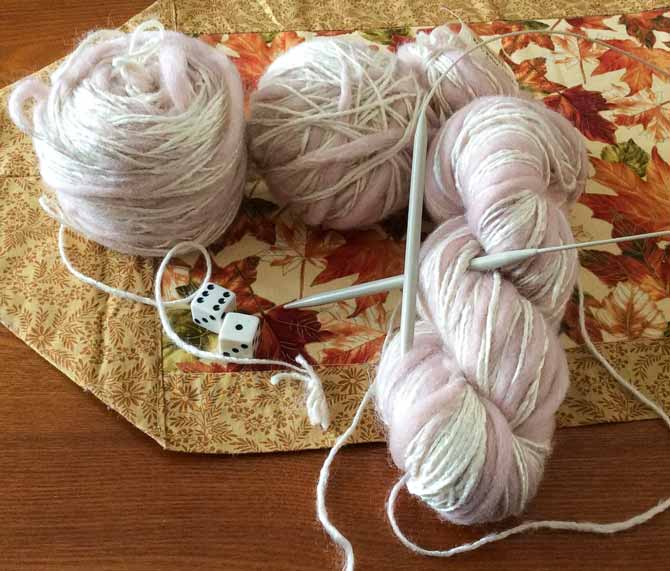 All you need to complete this project is the yarn, a circular needle, a pair of dice, and a stitch marker!

The recommended needle size for Bamboo Bloom is 9 [5.5mm]. Universal Yarn has a pattern on its website for a One Side Cowl (a moebius project) that uses 10.5 [6.5mm] needles, but this is a bit loose for my taste. Still, I want it a little looser, so I’m opting for size 10 [6mm] needles.
Charles cast on 100 sts for his cowl, but I’m using a size smaller needle, so I’m going to want more stitches. Charles chose his number because none of his multiples would divide into it. He worked just past the end of the round before moving onto his next instruction. I like this idea, so I want to pick a number that won’t possibly divide evenly into the numbers 2 through 12.
113, 127 and 131 are three prime numbers over 100 that might work for this project, but I think 113 would be a little shy of the number of stitches I want, so I’m going to work with 131. (A prime number is one that doesn’t have an exact divisor.)
If you want to have a more symmetrical piece, you can use 120 stitches. 120 divides evenly into almost every combination (2, 3, 4, 5, 6, 8, 10, and 12).  For 7, 9, and 11, you could add a purl stitch onto the end of the last repeat of a roll or 7 and omit the last purl stitch on a round of a roll of 11. A 9 roll is the only stickler — 9 x 13 equals only 117 sts, so that would require some creative insertions. Another alternative would be to simply re-roll if the roll turned up a 7, 9, or 11.
Because I’m going to have a yarn end to weave in, I’m not going to join in the round right away — I will knit a few rows in garter stitch, then join in the round. This is a great tip for beginning knitters, because it makes it easier to see that the work doesn’t twist when you join it.
Another thing I do to maximize the use of my scrap yarn (and I do this a lot), is to weigh the ball of yarn at the start of the cast on, and again after I have knitted my border. My yarn ball weighed 71 grams before I cast on my first stitch and 54g once I was ready to begin knitting the body of the cowl. Therefore, I used 17g of yarn — roughly ⅔ of an ounce — in the bottom border. From this, I estimate that I’ll need an ounce of yarn (28g) to finish off the work, as a cast off uses a fair bit more yarn than a cast on.
Once I have several ridges of garter stitch, I add a stitch marker, then proceed working in the round.
For each round, I roll the dice. The pattern is going to be a rib, so the left die tells me knit ___ and the right die tells me purl ___. 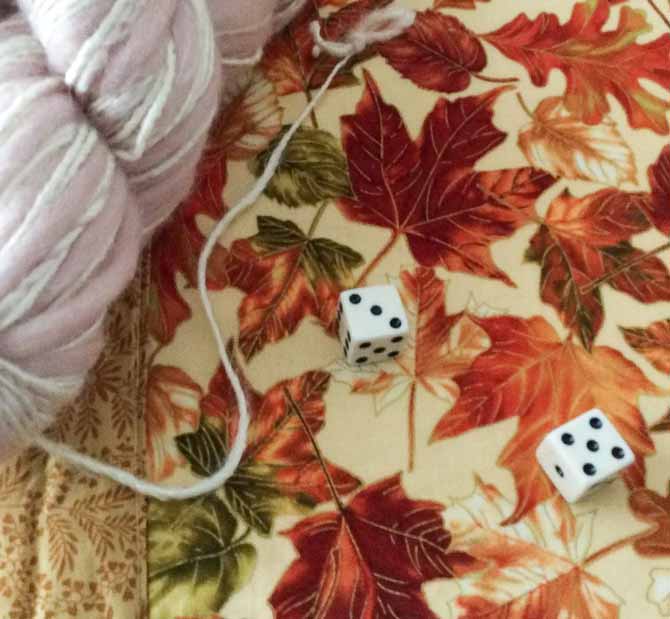 My first roll was knit 3, purl 5 (above). At the end of the round, I worked to the last stitch of the round and, because nothing divides into 131, there were a few stitches left of my last k3, p5 repeat. I slipped the st marker and finished that repeat.
Here’s why: If I stop at the round marker, and start a new repeat there, there will be a column of knit stitches in at least the first stitch of every round. Working past the end of the round makes sure that there will be a variety of knit and purl stitches at the beginning and end of each round. It also ensures that occasionally a round will naturally conclude at the stitch marker right at the end of a repeat.
Next, I rolled the dice to get a new combination of knits and purls for the next round, and for all of the rounds in the body of the cowl.
At the top, I ended the last repeat at the stitch marker, leaving out the last few stitches of the repeat, and, working back and forth, knitted 5 rows of garter stitch. Then, I bound off my piece, using a loose bind off. 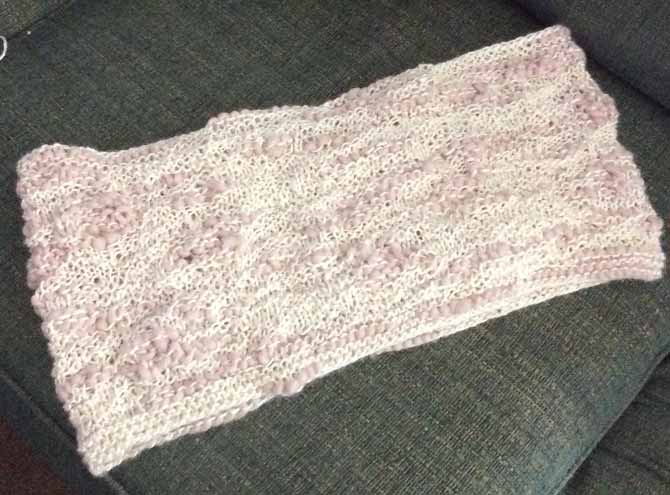 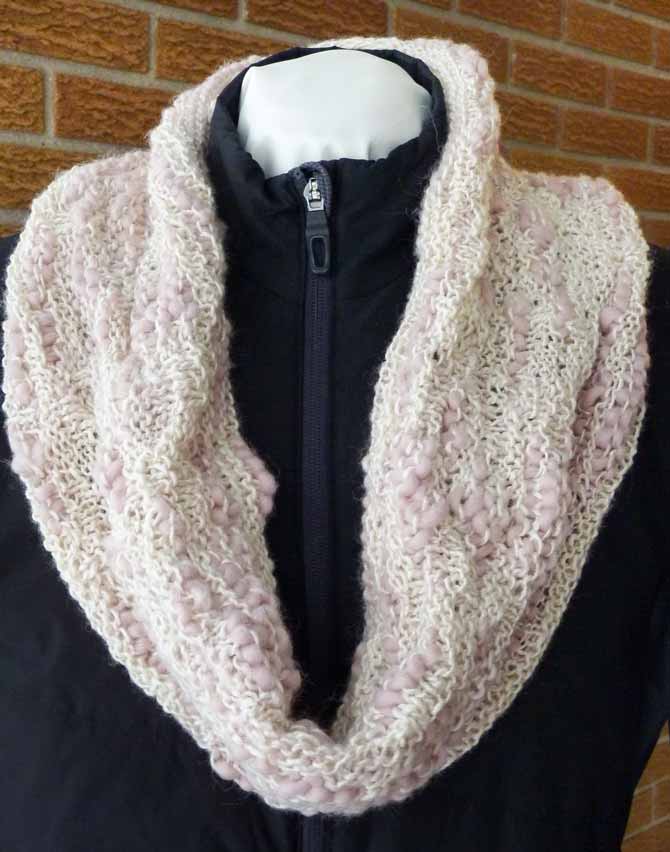 The finished cowl makes a nice, light accessory to a dark coat

Go to part 3: How to adjust a simple cowl pattern for a different yarn

Scrap yarn challenge – can she do knit?

How to adjust a simple cowl pattern for a different yarn

This antipilling acrylic yarn gets an ‘A’