Knitting a flat circle in the round becomes a crumb catcher

I hope you found some leftover Radiant Cotton yarn to try the double knitting technique in my tutorial from yesterday’s post. Leftover yarn is fantastic for sampling new techniques.

A crumb catcher is a utilitarian and decorative knit project that, well, could be called a doily, but that doesn’t capture the fun nature of how it’s put to use. Holiday treats are lovely to display, but this snowflake motive will dress up the whole dish. 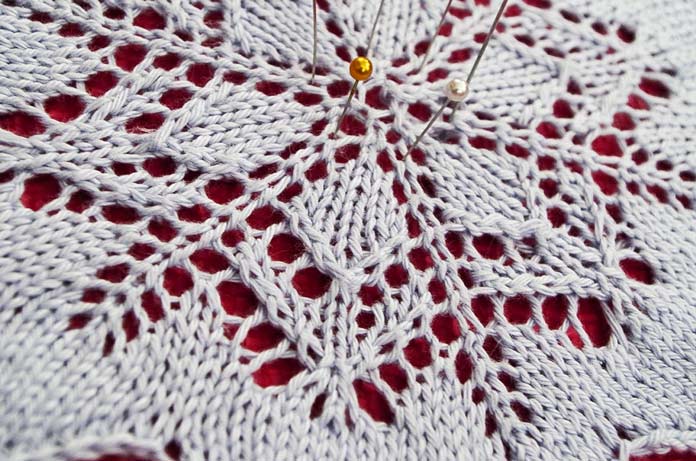 This knit doily is blocking so that it lays flat underneath some holiday goodies.

This crumb catcher is knit with some remnants I had of Radiant Cotton by Fibra Natura. It’s not so thin that it’s unwieldy to knit with, and it has a lovely sheen which makes it looks classy. To make this doily, I used a set of 2mm double-pointed needles to start, and then I changed to a long circular needle so that I could work with the magic loop technique.

One of the important aspects of knitting a circular piece that stays flat is to increase at the right rate. To figure this out, you need to do a little math.

I started with 6 stitches and doubled them in round 2, and worked round 3 as a plain round of 12 sts.

The snowflake crumb catcher is adding a delicate touch of winter to the festive table.

Another technique that I used on this snowflake doily is the bunny ear decrease. This involves decreasing a group of 3 stitches down to 2 stitches and maintaining a symmetrical alignment of the stitch legs.

Next, knit that loop together with the 3rd one on the left-hand needle but through the back loops (going first through the lifted strand and then the back leg of the next st). You have 2 sts resulting from that decrease that was worked over 3. 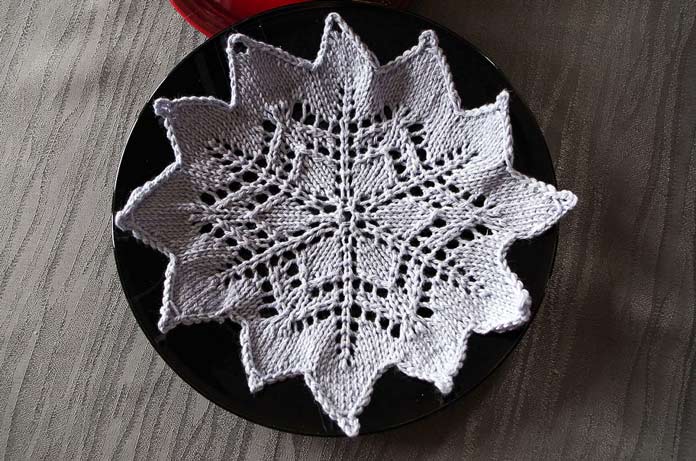 A six-point start ends up as a 12 point snowflake using yarn-over eyelets to create the lacy motif.

With a set of  4 double pointed needles, and using the back-loop method, cast on 6 sts, and distribute them so there are 2 sts on each needle.

Rnd 5 and every odd round: Knit.

K – Knit
P – Purl
Yo – Yarn over
K2tog – Knit 2 together
SSK – Slip 2 sts knitwise, return to LH needle, knit 2 together through back loops
SK2P – Slip 1 st, k2tog, pass slipped st over
Kfb – Knit in front leg then back leg of same st to increase 1
Kbf – Knit in back leg then front leg of same st to increase 1
W&t – wrap and turn, see above note
RH – right-hand
LH – left-hand
Picot – [wrap yarn over RH needle front back to front and pass stitch on needle over wrap] 4 times, insert hook in front leg of stitch at base of chain just made, pass stitch on needle over this strand 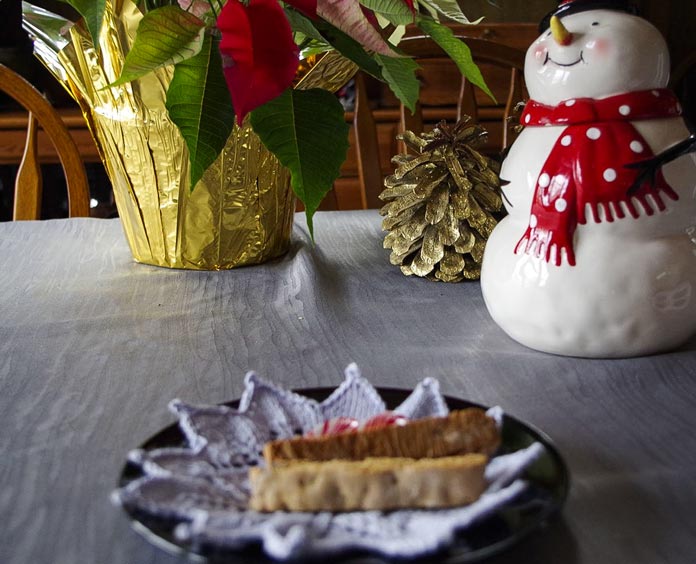 Gluten free biscotti drop a lot of crumbs, but this crumb catcher is just as adept at keeping the holiday table tidy as is this snowman cookie jar.

When you knit up this little doily, enjoy the new techniques or perhaps review some old favorites. Remember that when there are too many stitches to fit neatly on the double-pointed needles you can change to a magic loop technique with a circular needle.

This is part 2 of 5 in this series.
Go back to part 1: Coasting right into double knitting

Go to part 3: How to knit and finish sturdy gift boxes

How to knit and finish sturdy gift boxes

Knitting to create the perfect fit