This week I have the opportunity to knit with Universe, a lovely, elegant light linen yarn by Universal Yarns, designed to honor their 10th anniversary. This linen blend is perfect for knitting items that you can wear during the transitional times between spring and summer and summer and fall, and throughout the whole summer as well. You will find the items that you can knit with Universe will be romantic and have an understated glamour to them. Today let’s look at how this yarn is designed and a few ways how it looks knit up. 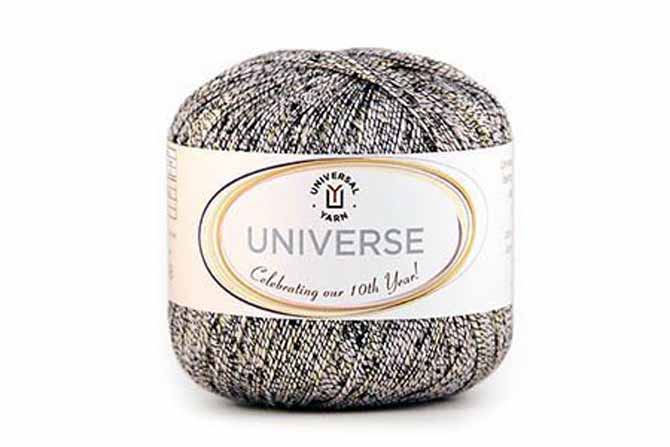 The fiber content of Universe consists of 42% linen, 41% combed cotton, 9% glitter and 8% polyamide. Each element of this yarn adds to its overall effect once it is worked up, making Universe everything you’d want in a stellar summer yarn. 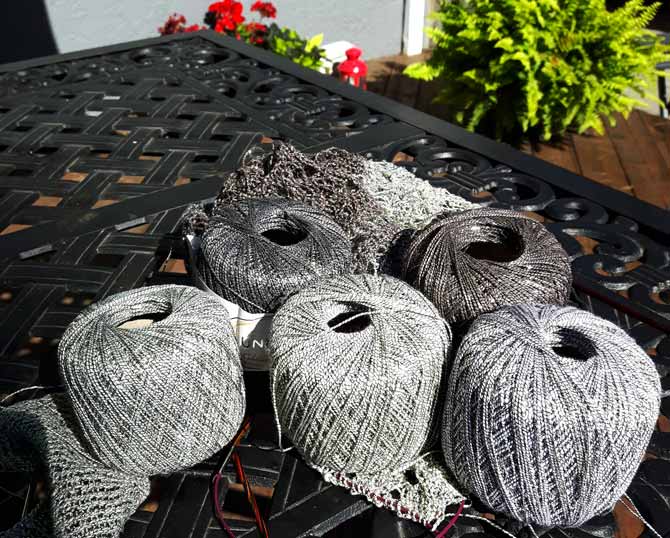 5 of the 10 colors of Universe linen-blend yarn

One of the most challenging photographs to take is of anything that glitters. For some reason, camera lenses don’t want to catch the glints and sparkles of items that aren’t moving. So even if you cannot see it in the photo, believe me that Universe yarn has fabulous glitter that isn’t overwhelming. Think of a demure Diana, Princess of Wales, not a garish Liberace. Each ball has a strand of glitter that is flat like a microscopic ribbon and one side is silver and the other side is gold. As the glitter is spun with the other plies, one or the other side of the ribbon shows on the yarn and catches the light. Universe has just the right amount of sparkle for a summer wedding shawl: pretty, but you won’t outshine the bride!

I received the 5 colors above to sample. In the back row of the photo above, from left to right, are Tin and Bronze. Tin is a warm charcoal gray with rose and olive undertones. Bronze is a warm mocha brown with warm bronze undertones. In the front row, also from left to right, are Pottery, Silk, and Crystal. Pottery is a pale lichen green which reminds me of a very light white clay with a tinge of green glaze. Silk is the color of champagne, a pale creamy yarn with the smallest blush of pale rose. And Crystal is a wintery white, crisp and clean. 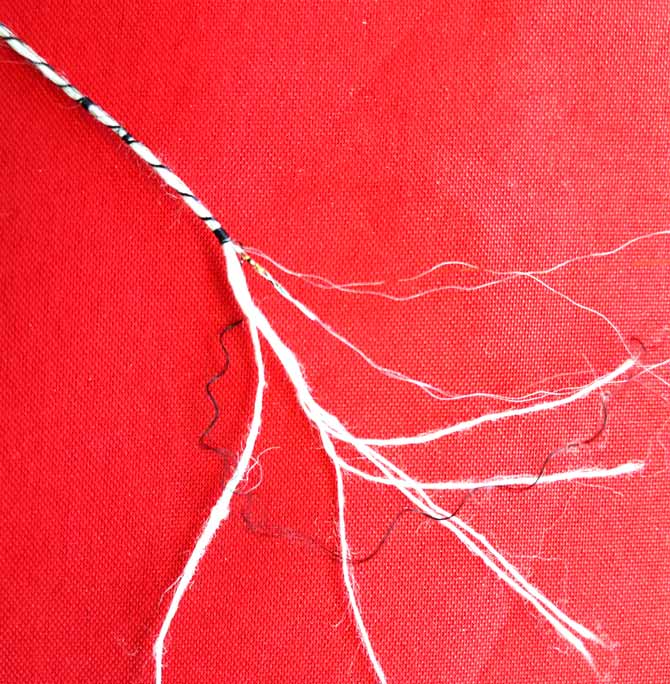 Elements of Universe Yarn and how they are combined

One of my dream jobs would be designing yarn itself. I think the team who developed Universe yarn had a blast! If you look at the above picture of a “dissected” strand of yarn, the leftmost white strand is a thick and thin slub ply of linen. When linen is spun, it is often the case that these slubs (or wider segments) are allowed to stay in the ply. Then there are 5 plies of combed cotton which is evenly twisted and doesn’t have slubs.

The 2-sided glitter tape became very fragile when I poked at it with pins and tried to separate it from the other plies, so it looks frayed in the photo, but when intact, one side is silver and the other gold. It is the topmost strands in the close-up.

The last ply consists of the black polyamide. This is an extremely fine black thread that acts as a binder and is wrapped around the other plies rather than twisted alongside them. It has some elasticity and adds that to the final yarn to a small degree. If you look carefully, you can see that the wrap of the black binder thread isn’t completely even; there are even times when it is wrapped about 10 times around the same millimeter of yarn, creating a little black dot. 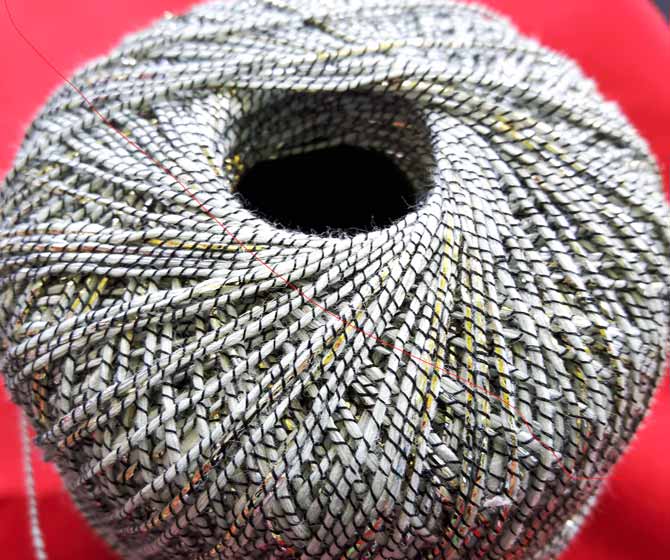 Close-up of Universe in the Crystal colorway

Universe is a very pretty yarn and it knits up into very pretty things. Other posts this week will explore how to cast off when knitting with non-stretchy yarns, and designing your own summer shell. We’ll also look at some other tidbits related to using Universe. Here’s a little video I made to hopefully catch some of the glitter in action.

A review of Universe yarn by Universal Yarns – YouTube

See www.knitmuch.com for the full review.

Alter the knitted Any Day Beret for summer wear

The benefits of knitting with Lady Sybil...