Today is the most fun I’ve had all week with Finn.

Finn is a 50% acrylic, 25% merino wool and 25% alpaca yarn that comes in a range of 12 colors. Today, I’m using Fair Isle knitting and five of those colors to sample for the a glove pattern I’m developing for tomorrow’s post. 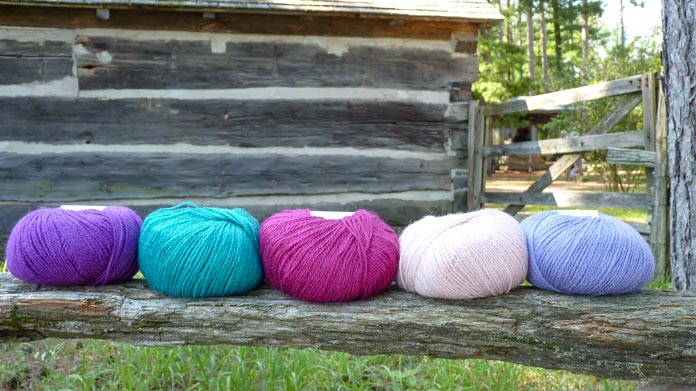 I turned the ball bands around so you can see the colorful lineup of Finn I chose for the Fair Isle gloves I’m designing.

To make matters, well, more challenging, is that traditional Fair Isle gloves usually have one pattern on the back of the hand, and another, smaller pattern on the palm side. I’m choosing to make my gloves with solid-colored fingers, but traditionally patterning ran all the way to the tips of the fingers! 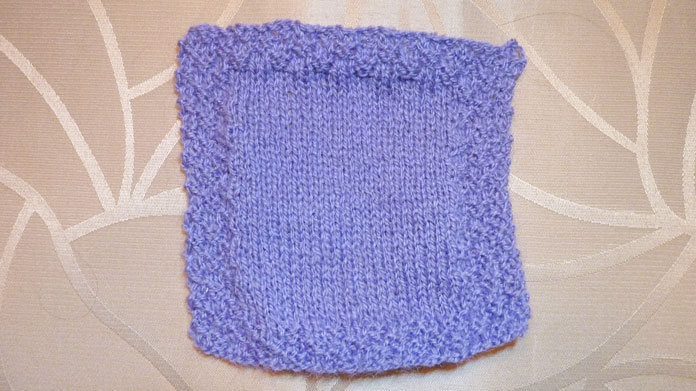 This is my flat-knit swatch. Today I’ll make several swatches in the round, the way I will knit my gloves.

In my last post, I discovered my base gauge (pictured above), and mentioned that I will likely go down a size or two in needles to make a nice, dense fabric for the gloves I plan to make. I also learned that Finn responds well to being washed before measuring gauge. Washing relaxes the fibers and evens out the stitches, which can be especially helpful in Fair Isle technique.

For my first sample, I selected US 3 [3.25mm] needles, and chose a pattern that has a 15 stitch and 15 row repeat. For the palm, I chose a 4 stitch, 2 row pattern that makes little “plus signs” that break up with the changing of the colors.

I also incorporated a little “filler” pattern at the bottom of the sample, in case I needed a little extra length on the hand. Many traditional mitts had such a feature.

I liked a lot about this sample, but wasn’t happy with the gauge. It was too loose for a glove. 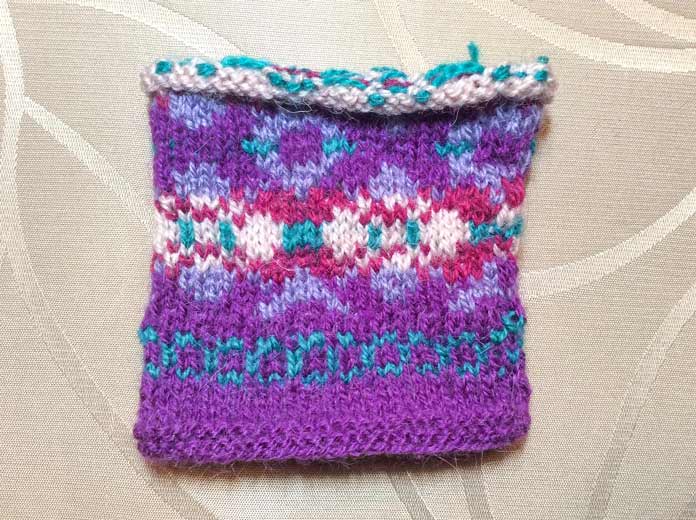 This half-palm length sample shows the two motifs that were my ultimate choices for the gloves. The gauge of this swatch is closer to what I desire.

For a second sample (center in the photo below), I chose a pattern that has a repeat of 12 stitches and 12 rows. I also went down to US 2½ [3mm] needles. I added another small pattern at both the bottom and top of the swatch, and for the palm, I tried two different patterns. First, I tried a zigzag that I really liked, then I tried a 6 stitch and 3 row pattern that only worked when I made the colors coincide with the changes of color every 3 rows.

I was MUCH happier with the fabric I got from this sample. 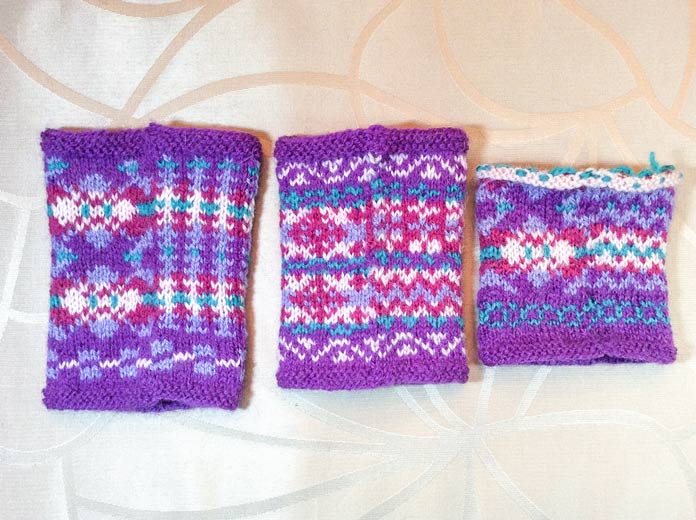 Terse charts are made up of a grid with dots in the squares to represent the pattern. This is a traditional form of notation, which leaves the choice of color up to the knitter.

Not only could I change the order of the colors in the chart, I could change out the entire colorway and get a completely different looking glove. The following photo shows the motif in terse form, the motif in the colors I used and an alternative colorway using Finn colors Blizzard (white), Glacier (light gray), Jam (purple), Cast Iron (black), and Goldenrod (deep gold). 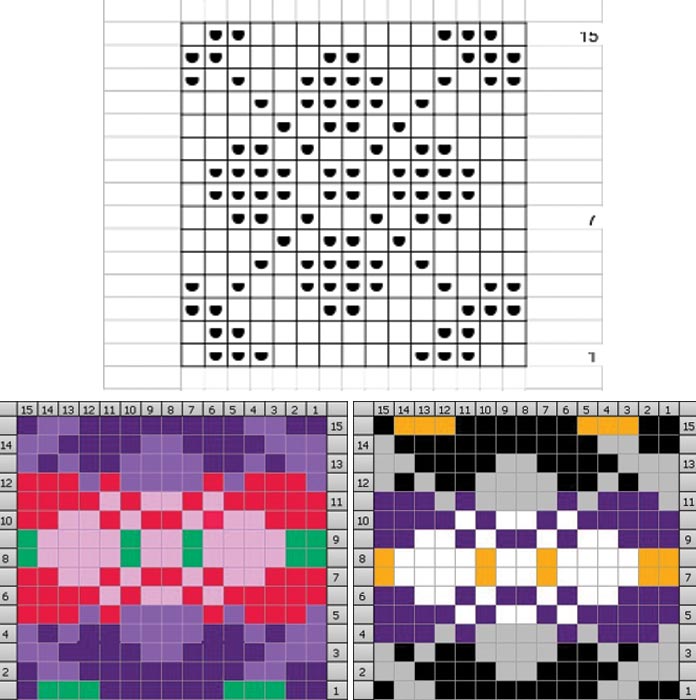 The terse chart for the back of the hand is shown on the left. In the middle is the chart adapted to show the colors used for the samples in the photo above. On the right is an alternate colorway for this same motif using other colors of Finn. In the third chart, the bottom row of the motif has been moved to the top of the motif.

As you can see, one Fair Isle stitch dictionary has the potential to provide many many hours of knitting entertainment!

Now, in addition to changing out the colors completely, I could change the order of the 5 colors I chose and come up with a completely different look, but I find the original arrangement to be quite pleasing. The palm looks good, too!

The takeaways I want you to have from this post are

3. Try some different patterns from your stitch dictionary and discover that

This is part 3 of 5 in this series.
Go back to part 2: Finn and tension and negative ease

Go to part 4: Fair Isle gloves made of Finn yarn

Finn and tension and negative ease

Which measurements matter in designing a men’s...