First, I’ve got to say that I love how these photos turned out. I finally managed to catch the sheen of the bamboo rayon in Bamboo Bloom yarn. It doesn’t hurt that the texture of this yarn really shows as well.

Today, I’ll explain how I make a very randomly textured fabric by using a bit of number fun…NO MATH really…well, I lie, 1 addition equation, but then it’s just patterning after that. 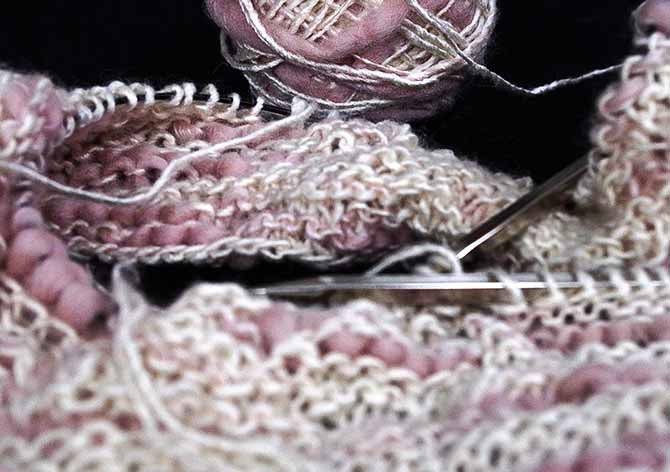 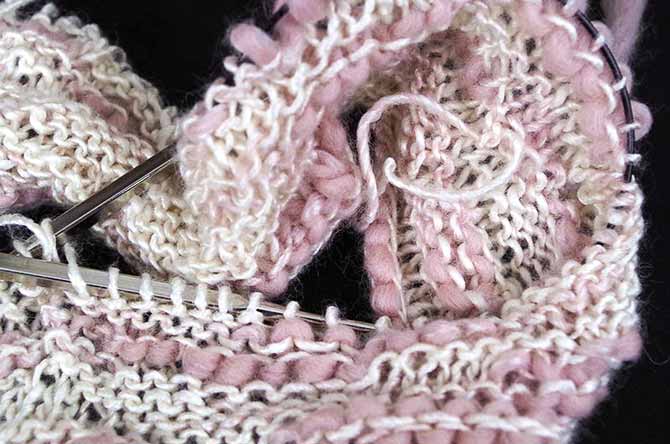 Top view of cowl with textured knit and purl stitches

I call this a centennial cowl because it’s based on my birth year, 1967, Canada’s centennial year. The fun part of this cowl pattern is that it’s based on a pattern sequence determined by the birth year of the knitter or the recipient of the cowl.

To knit this cowl out of Bamboo Bloom thick-n-thin yarn, simply cast on about 100 stitches on size 6mm or 6.5mm needles. You can cast on more or fewer stitches, but you just want to make sure that the number of stitches you cast on IS NOT a multiple of the sum of your birth date numbers.

So back to your pattern. Cast on your desired number of stitches and join in the round, making sure you don’t have a twist in your cast-on stitches.

The second way that the number sequence applies to the pattern is the combination of knit and purl stitches. In my cowl my first row was: *k8, p1, k1, p9, k6, p7; rep from * around. Because I don’t have a multiple of 32, when I get to the end of the round, I’ll be somewhere in the middle of the sequence. That’s fine, I don’t interrupt the sequence, I simply mark the join with a stitch marker and finish the sequence till I’ve done the p7.

Then I begin the sequence again with k8 p1, etc. I do this for a total of 8 times. Then the next time I start a sequence past the beginning of round stitch marker, I begin the sequence with purl: *p8, k1, p1, k9, p6, k7; rep from * around. But I do this just once, because according to my row sequence, I now need to work another row that begins with a knit stitch. And so on.

This semi-random sequence of numbers eventually creates an evenly distributed series of ridges and valleys in garter, stockinette, and reverse stockinette stitches.

Close-up of random stitches in cowl

I’m not into numerology or anything like that, but I do think it’s a fun way to personalize a knitted gift for a friend, just by knitting a little meaningful code that represents them right into the fabric. Bamboo Bloom is a great yarn for this type of project as it’s not scratchy, but it’s warm enough for those in between seasons. 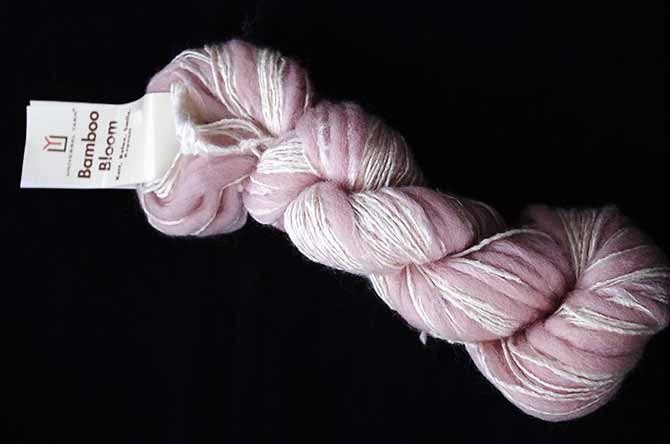 This is part 5 of 5 in this series.
Go back to part 4:  How to avoid pooling in knit fabric

How to avoid pooling in knit fabric

What to know about knitting an oversized wrap with...

Knitting a summertime Tee with waves of color

How to block your knitting to perfection!

How to knit super stretchy edges for the Contours...

Love this!! Love how this pattern makes this cowl look like and abstract work of art~~~~So Cool! And I love the colors of this yarn!

What a fun idea. Just got more BB into the yarn store I work at. Will be telling the boss about this pattern.

Cool! I’m pinning this to my “Stitch Games” board!

Click the image below to see the whole issue online FREE at any time. PDF download is also available FREE but only for a limited time until November 30th. See all our FREE Magazines HERE.

Knitting with linen yarn, my story, my...