In this series of posts, I’ll be talking about superwash yarns, specifically Universal Yarn Deluxe DK and Deluxe Worsted.

Superwash wool is a boon to knitters who want to make natural fiber knits for loved ones who need easy care. Natural wool, as many people know, will shrink if it’s thrown in the washer and/or dryer.

Shrinking is caused when the scales of the individual wool fibers become locked together from agitation and heat. Even a warm water wash can cause wool fibers to lock together, and, once locked, it’s incredibly hard to coax them apart! I have a friend who still laments the fate of the pure Scottish wool sweater he had as a teen that could fit a cabbage patch doll after his sister washed it for him.

Superwash is a process that keeps the wool fibers from felting, or fulling,* in the wash. There are two processes that industry uses to treat the yarn. Some yarns have a thin coating of polymer applied to the yarn, effectively filling in or smoothing out the scales on the wool fibers. Other yarns are treated in a similar fashion to mercerized cotton yarns: they’re passed through a very brief acid bath that removes the barbs from the fibers’ scales, which prevents them from locking together.

These treatments DO affect the finished yarn, and it’s important to know that a superwash yarn won’t react exactly the same as a non-superwash wool – it tends to have a little less memory and a little more drape. The drape makes superwash wools great for loose garments like shawls and tunics. Ease of care, though, is usually an acceptable trade-off for the slight change in the memory of the yarn.

Some people who are allergic to wool sometimes find that the absence of the “scritchiness” superwash yarns have in comparison to natural wool fibers (by either of the superwash processes) makes the fiber less of an irritant, and they can actually enjoy wearing a pure wool garment.

This week I’m taking a child’s pattern and talking about some unusual knitting issues – how yarns and their weights are described, how superwash yarns react to knitting and washing, bending a pattern to fit our desires, intarsia knitting and weaving in ends, and changing out colors. Whew, I’ve got a lot of ground to cover! I’d better hit the needles! 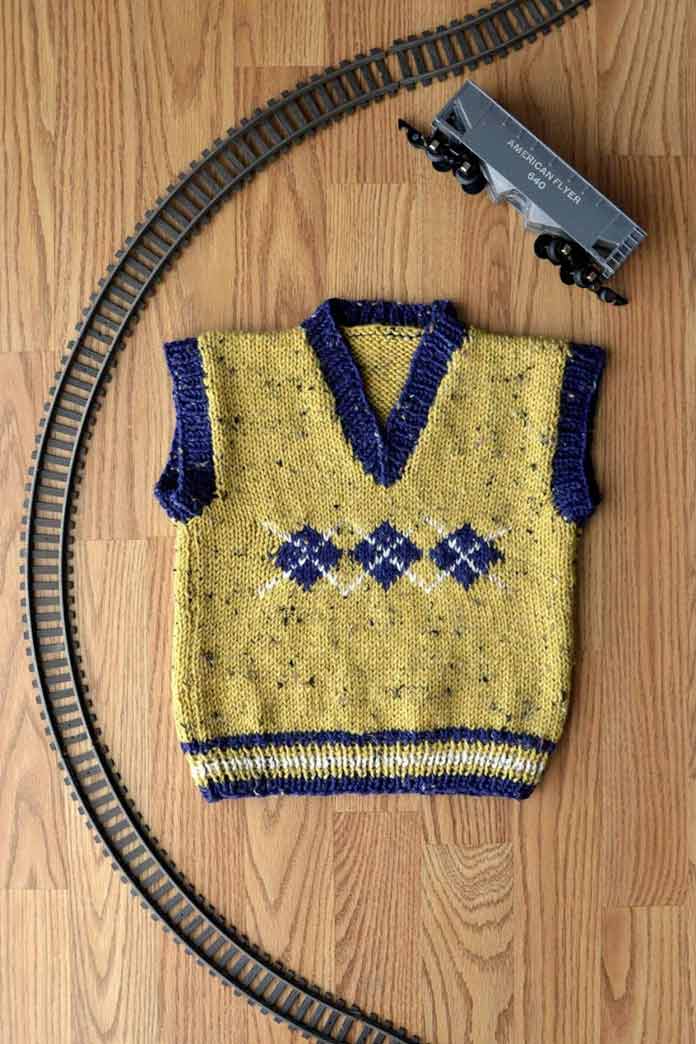 This child’s vest with a bit of argyle on it, is the ‘canvas’ for the remainder of the week. It’s called the Argyle Junior Vest.

* A bit of textile trivia: technically speaking, felting is a process that uses unspun fibers. Once the fibers have been spun and woven or knitted, the term for intentional shrinking is called fulling. Woven woolen blankets were often fulled after processing to brush up the fibers to add to the insulation value of the blanket and to help set the weave in place. Many surnames we know today were derived from the trade of the person – Knight, Weaver, and Carpenter, for example. Fuller is also one of those names.

Knitting a play mat for baby with Clean Cotton...

What to know about weaving in ends with Clean...

The magical qualities of Nymph make for...