This series of posts is dedicated to Lion Brand Mandala Baby DK, a fun, acrylic yarn that has sparked all kinds of creative ideas!

In my Tuesday post this week, I offered tips for working with yarns that have long spans of color, and came up with a bunch of ideas that included the sleeve-to-sleeve child’s sweater discussed in my Wednesday and Thursday posts.

I also came up with several ideas for baby blankets that can be made in the bright colorways of Rainbow Falls, Unicorn Cloud, or Honeydukes, or the more pastel baby shades of Arendelle, Narnia, or Wishing Well.

Several of these techniques need a complementary solid color yarn to go with Mandala Baby DK. It’s important to choose the right solid for the job.

Most people’s first instinct is to reach for a neutral. Black usually creates a classic “stained glass” effect, as shown in the Afghan Scraps Cushion Top featured in the Spring 2017 issue of A Needle Pulling Thread magazine. White can lift the look of a project. Gray, as one would suspect, can send a project in either direction, depending on the colorway of the variegated yarn. 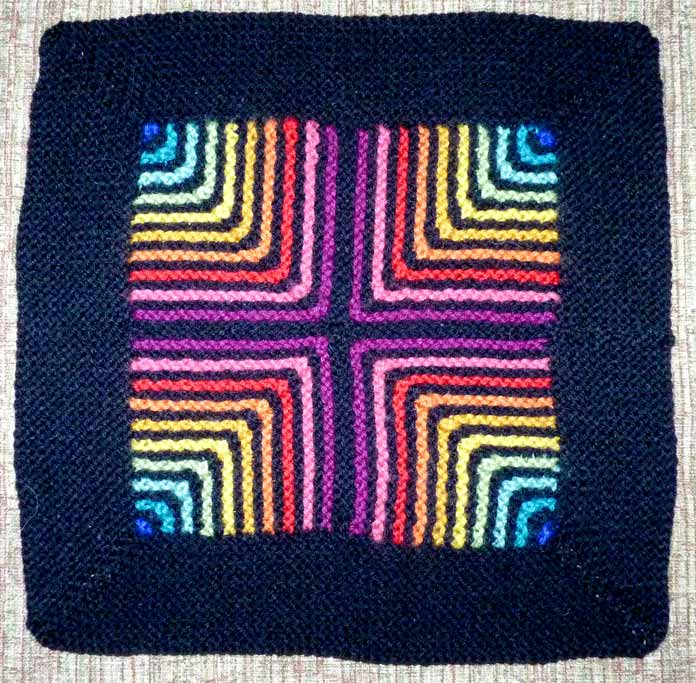 Using black between the colorful stripes in this pillow top creates a stained-glass effect.

Choosing a complementary color that is too close to the color(s) in the variegated yarn can pose some problems:

In the photo below, the contrast between the pastel shades in Arendelle will create a subtle but effective result, but if I use the white to create stripes or a pattern with the Unicorn Cloud colorway on the left, I will end up with a large white section when the contrasting solid comes up against the white section in Mandala Baby DK.

I chose white yarn to knit Faux Fair Isle in the Arendelle colorway (on the left). If I use it with Unicorn Cloud, my pattern will disappear when the white in the Mandala Baby DK meets up with the solid white yarn. 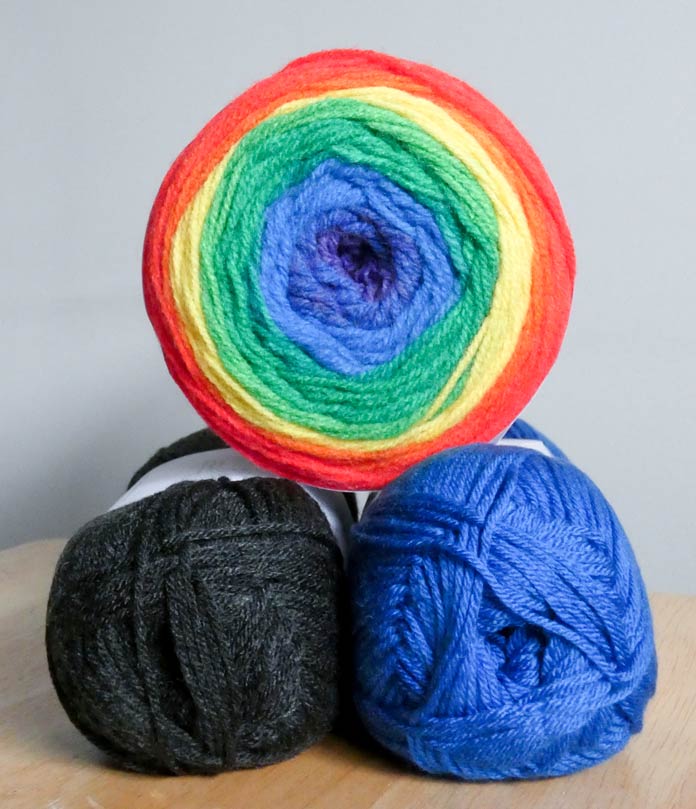 Two options for a contrast solid to use with Rainbow Falls. I would choose the one that contrasts with every color in the variegated yarn.

I requisitioned Bachelor Blue to use with the Arendelle colorway but ended up using white for my actual project. This happened by accident when I picked up a ball of the Arendelle and the white along with a charted stitch dictionary. I leafed through the book and found a chart for a Nordic star I thought was pretty. I call this phenomenon “doodling with yarn,” and I highly recommend it.

I set out to make a two-sided scarf. I began with a tubular cast on, which fluted far more than I wanted. If I’m doing this again, I’ll choose a different cast on perhaps one for double (two-faced) knitting.

I cast on 132 stitches: enough to put two repeats of the 32-stitch pattern with an end stitch to finish off the second repeat and a selvedge stitch, on each side of the scarf. I knitted several rows of white before I began the pattern in the variegated yarn. I used a circular needle and the magic loop technique. I placed a green marker at the start of the round (I almost always do this — green means “go”), and an orange marker at the halfway point or the start of the B side. Rather than carry the variegated yarn out to the edge of each round, I pulled it over to the first stitch of it on the new side. Doing this had the effect of anchoring the two sides of the scarf in a zigzag pattern, by following the natural outline of the pattern. 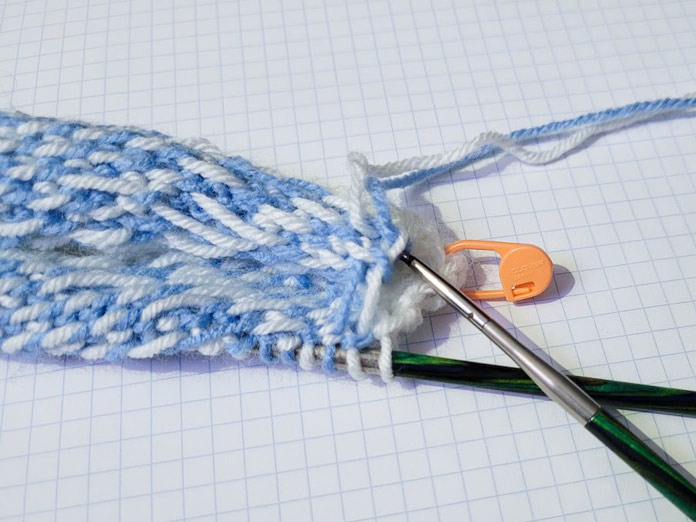 The first stitch on the bottom needle has been slipped on this row to form the selvedge stitch. The white and blue yarns have been carried over from the back layer of the scarf without twisting them (as I would normally do).

Several inches in, it dawned on me that I could have used a completely different design for each side of the scarf! Oh, well.

The acrylic content in Mandala Baby DK resulted in a very soft, very squishy piece that traps lots of air to stave off cold winter winds.

Here’s the pattern and the chart. 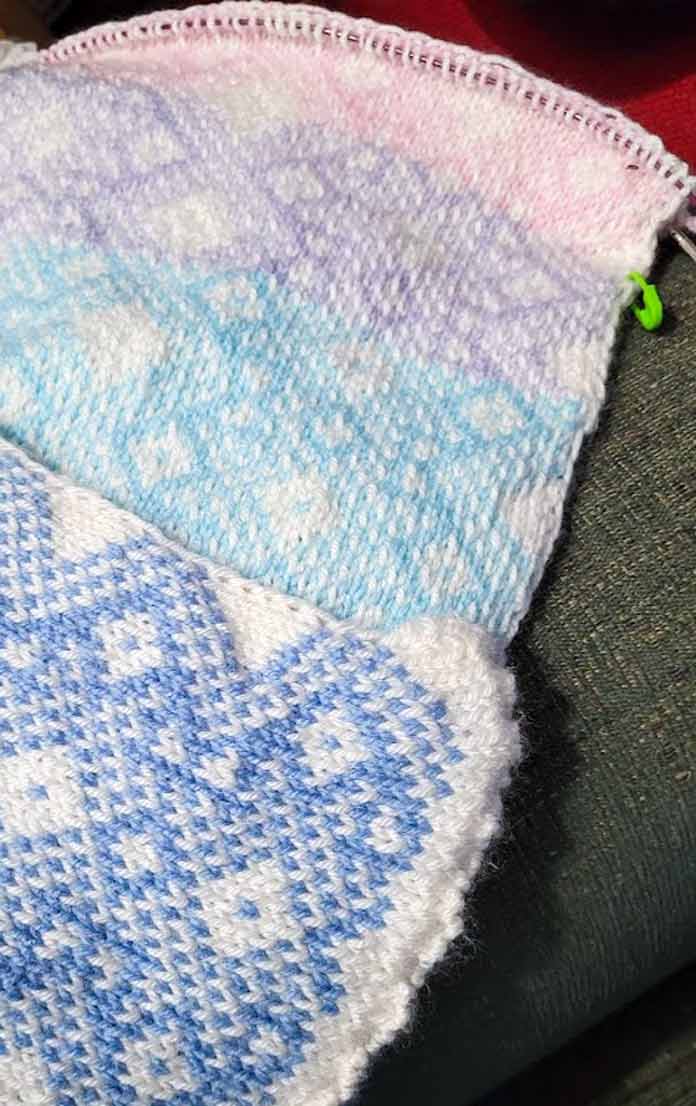 I ran out of time to finish this scarf, but in the time I had available, I knit 23” of scarf, which consumed one ball of solid white. I still have 70g left of my first ball of Mandala Baby DK!

Cast on 132 sts with Col A and divide to 66 sts per side. Using magic loop, k 4 rounds, slipping the first st on each side of every other round to form selvedge.

Join Col B and work chart once on each side of every round.

Cast on twice as many stitches for this chart, divide onto to sections of a circular needle to work in magic loop, and get started on your own scarf!

Rep 14 rnds of chart until scarf is 1” [2.5cm] shorter than desired length. Work Rnd 1 of chart, break B, then k 4 rounds Col B, maintaining selvedge. Cast off using 3 needle bind off. Weave in any remaining ends. 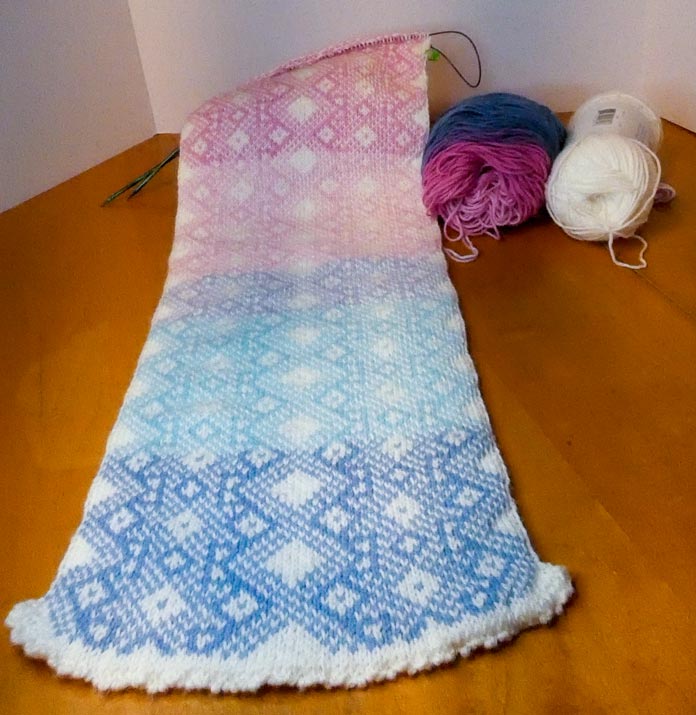 Mandala Baby DK’s variegations create stripes without having to weave in 4 ends at every color change.

I have enjoyed working with Mandala Baby DK even more than I imagined. I hope my enthusiasm is catching and you’ll try it for a project soon. Happy knitting.

Go back to part 4: Knitting a Mandala Baby DK sweater from a schematic – part 2

Knitting a Mandala Baby DK sweater from a schematic – part 2

Feels Like Butta yarn knits up soft beyond belief!

Taking a pattern for a poncho and...