There’s no rank of Major in the Navy, but that doesn’t mean a Major can’t go to sea!

This week, we’re knitting with Major, a bulky, 100% acrylic yarn that has 35 colorways. Yesterday, I used the Honeydew colorway to develop a pattern for a baby blanket, and to explain the usefulness of mattress stitch to create panels that play into the striping of this soft, lofty yarn. Today, I’ll be working with the Verdant colorway to create a handsome scarf that can be worn by a man or a woman. 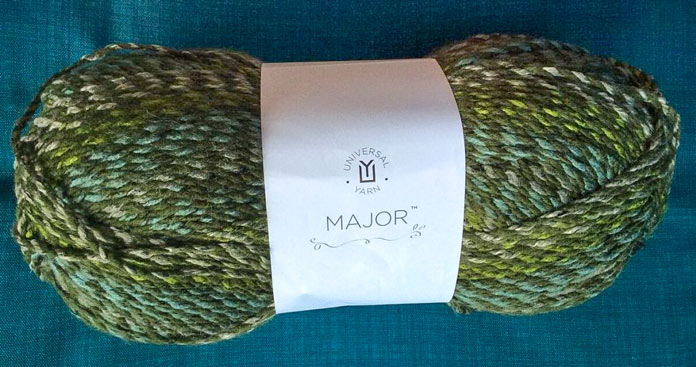 The verdant colorway of Major sets the scene for a handsome scarf.

The style of the Seafarer’s scarf has been around since 1898, when a volunteer for the Seamen’s Church Institute began to knit gifts for mariners who were at sea over the holidays. The basic pattern has garter stitch panels divided by a length of k4 p4 ribbing that goes around the back of the neck.

This design has two ingenious features: the garter stitch ends can by layered one over the other, making a double layer in the open “V” of a navy pea coat. In addition, the ribbed section tends to “buckle” around the collar, preventing drafts from sneaking down the back of the neck. 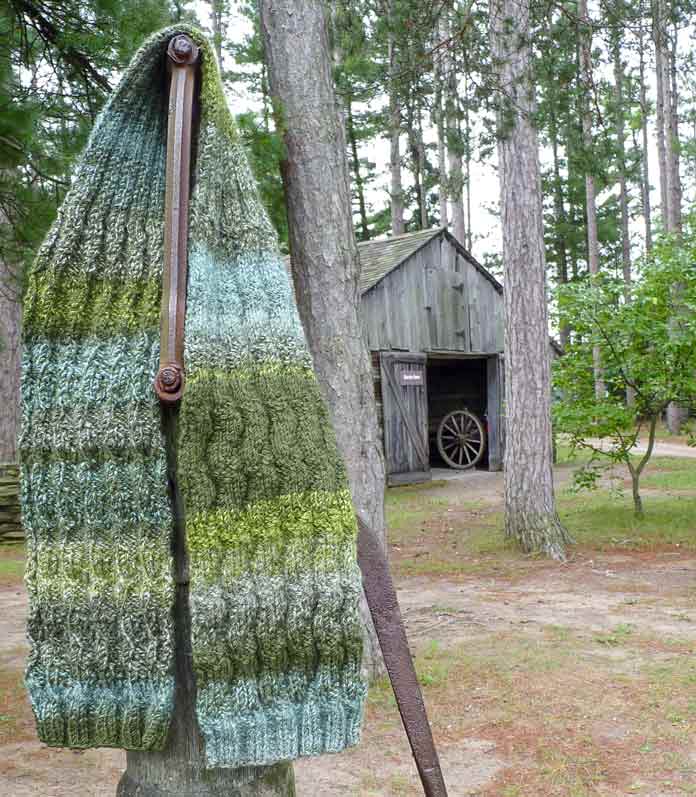 The type of ribbing can vary, but a wider rib (k3 p3, k4 p4 or even k4 p3) makes a soft, rolling fabric that draws in enough, but not too much. The ribbing can be adapted to flow from the knit and purl stitches of the panels, if they’re being worked in a pattern.

The end panels were originally done in garter stitch, so the knitting usually began at one end, and was knit continuously to the other end. Instead of using garter stitch, double seed stitch or even a 4 x 4 “seed stitch” could be employed, such as the one in the free Anything Blanket pattern from Canadian Guild of Knitters’ website.

This schematic shows the basic shaping of a seafarer’s scarf, two end panels with a strip of ribbing in between.

Any stitch pattern that is attractive on both sides can be used for the end panels. Some patterns have a clear direction, in which cases it may be desirable to work them in a different fashion. Depending on the pattern selected, there are other options for the construction.

I like to weigh either my pieces or my remaining yarn at intervals to maximize the length of my scarf with the yarn available. I’ll describe that as we go along.

For a pattern that looks better when viewed from the bottom up, I begin at one end, cast on and knit the first panel. When it’s as long as I like or when I’ve used just less than ⅓ of the yarn (by weight), I jot down this number to be sure I save enough yarn to complete the second end. I proceed to work the ribbing section, weighing the yarn periodically to be sure I leave enough yarn for the other end panel.

When I have a pattern that looks better when viewed from the top down (or if I just want symmetry without grafting), I use a “top down” construction. I put “top down” in quotations marks because I knit the ribbing first, then work the front panels from both ends of the ribbed panel. As these panels will go down the front of the body, I’m essentially knitting them top down.

For this method, cast on the stitches using a provisional cast on and purl one row (this is a WS row). Knit the ribbing section.

If I’m concerned about the amount of yarn on hand, I will weigh this section and knit it as long as ¼ to ⅓ of the total weight of the yarn will go.

At the end of the ribbing, end with a RS row, then match the previous end by working a purl row with the WS facing.

Next, knit across that piece, go back to the provisional cast on, join in a second strand of yarn, and pick the stitches up from the cast on. If I’m making a wide scarf I might switch to a circular needle at this point.

From this point, work both ends of the scarf at the same time until the panels are the desired length or until there is just enough yarn left to cast off the two panels.

While I’ve been explaining the various construction methods, I’ve searched through a few stitch dictionaries to find an attractive pattern that will look good with our Verdant colorway of Major (the magic of blogging!)

Come back tomorrow for the pattern and an array of colorful samples. 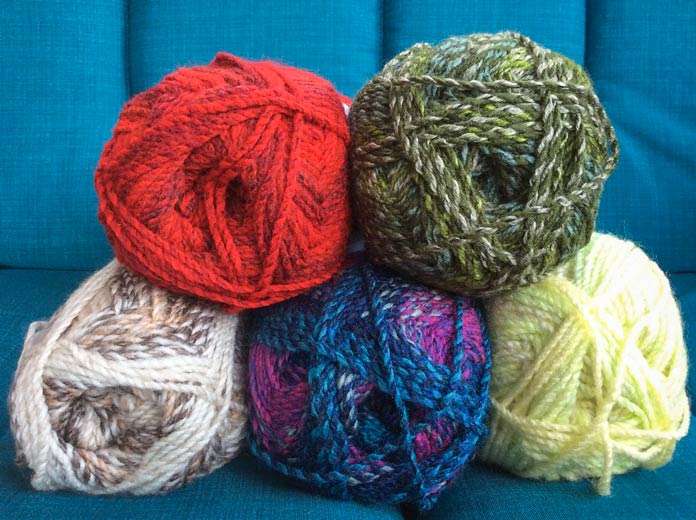 The Honeydew is over, but I’ll be sampling these other colors in tomorrow’s post.

This is part 4 of 5 in this series.
Go back to part 3: Major tips for working with a variegated yarn and a bonus pattern

Why don’t you give credit to the creators of the scarf and post the link to The Seamen’s Church Institute: their mission of hope and charity to Merchant Mariners continues to this day. They deliver hundreds of handknit hats, scarves, vests etc to merchant seamen on their ships at Christmas time. As well as providing other types of assistance.
Maybe other knitters will be moved to participate in this project
https://seamenschurch.org/christmas-at-sea

A direct link to the Seamen’s Church Institute Basic Seafarer’s Scarf pattern was included in the text of my post. The purpose of the post is to feature our sponsored yarn. While we fully appreciate the work of the SCI, we are limited in our ability to travel off-topic. Thank you for providing this additional information for our readers. As someone who knits regularly for charity, I thank you and all knitters who knit for their charities!

The properties and benefits of Couture Jazz...

Bride’s handkerchief, aka tension swatch for a...