In this series of posts, I’m sharing my experiences with Hue + Me yarn by Lion Brand. Hue + Me is a bulky weight yarn with 4 plies that are beautifully spun to create great stitch definition. Its 80% acrylic, 20% wool construction makes it easy care for busy people and its bulky weight makes it great for stopping winter chills!

Every color of Hue + Me is designed to go with every other color in the line. These 3 colors sure work that way! Front: agave, middle: haze, and back: rosewater.

Yesterday, we looked at why Hue + Me yarn is so wonderful to knit with. In this post, we’re going back to the basics with three knit-and-purl stitches: seed stitch, moss stitch, and k1, p1 ribbing. Seed and moss stitches are basic stitches that are often confused, and, while they all use k1, p1, they aren’t actually ribbing, because the bumps of the purl stitches raise above the surface, while in ribbing, the ‘purl bumps’ recede. Also, ribbing tends to draw in horizontally, while these stitches tend to spread out horizontally.

If I had a nickel for every knitting sample I made since I started Canadian Guild of Knitters in 2002, I could probably buy a very expensive set of interchangeable knitting needles! And, I’m doing 4 more for today’s post! For all that, I’m still a fan of sampling, and encourage all knitters to do it. If you aim to make all your samples the same dimensions, over time you can create enough squares to make a blanket or a coat of many colors! 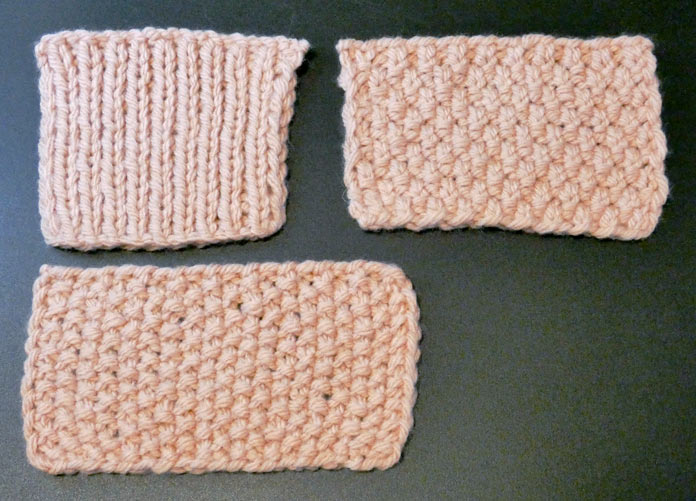 All 3 of these samples were made using 21 sts and 17 rows and various arrangements of k1 p1.

Worked over an odd number of stitches:

Seed Stitch – in the round

*Worked over an even number of stitches|:

The Moss Stitch is worked just like the seed stitch or ribbing, except that the k and p stitches are stacked and switched out every 2 rows. This gives a lovely fabric that is attractive.

Worked over an odd number of stitches:

Worked in the round, the Moss Stitch goes like this:

Now I’ve just done something here that you may not have noticed: I’ve written the instructions for the 4 sections of Moss Stitch in 3 different ways. All of them have a 4-row pattern, and all of them use a k1, p1, but the way I’ve written them shows different ways a designer can write down instructions. The first two are written for an absolute beginning knitter: every row is spelled out in complete detail, and they even show that some of the rows are repeats of rows before.

The third pattern substitutes the ‘spelled out’ instruction and points the knitter back to the other rounds that are the same. A knitter using a sticky note to mark their place can still stop anywhere, place their note, and conveniently pick up from where they left off.

The fourth pattern conveys the same information, but in three lines instead of 5. An absolute beginner could follow it. However, it might be easy for them to lose track of where they are. For that reason, this pattern is aimed more at an intermediate knitter.

Usually, when creating knitting patterns, especially ones that will be published in books or magazines, column space is at a premium, so the fourth way of giving the instructions would be the preferred format by editors.

Join me tomorrow as I show you different ways of using edge stitches to make an attractive edge to a scarf using Lion Brand Hue + Me yarn.

This is part 2 of 5 in this series

Go back to part 1: Smooth and speedy knitting with Hue + Me

Go to part 3: How to knit tidy edges

Smooth and speedy knitting with Hue + Me

A double-knitted pocket scarf with Hue + Me –...

Smooth and speedy knitting with Hue + Me

Knitting the Galway Poncho with confidence

Are they hand warmers or mittens … you decide

Knitting a warm hat with patterns from the Poncho

Knitting swatches to determine needle size and to measure...

Click the image below to read the issue FREE online at any time. PDF download is also available FREE but only for a limited time until October 31st! See all our FREE Magazines HERE.