Home » Yarns » Weaving with Magnolia is as beautiful as knitting with it (It’s a wrap!)

Weaving with Magnolia is as beautiful as knitting with it (It’s a wrap!)

This week, I knitted with Universal Yarn Magnolia, which is a super fine weight yarn that blends modal with cashmere to create soft knitted garments perfect for spring and summer.

Yesterday, I showed you the Paulie cardigan designed by Isabell Kraemer I knitted, and which turned out beautiful. I love the way the two colors enhance each other. Today, I’m using Magnolia to weave a wrap with all three colors on my 28” Ashford Knitter’s Loom. 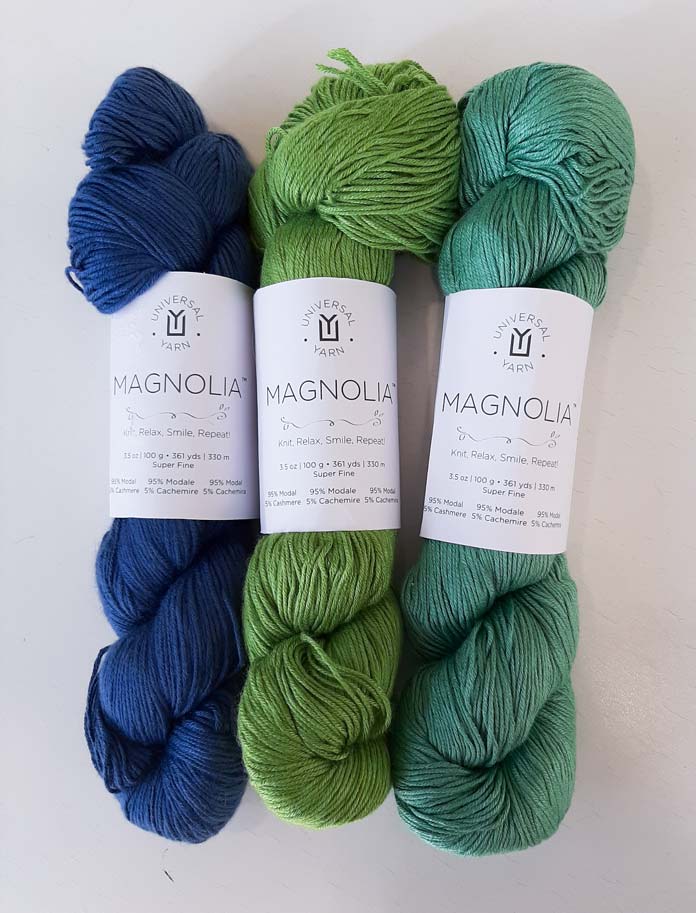 If you’re unfamiliar with weaving terminology, here’s a brief explanation of some of the terms.

Warp – the yarn that runs lengthwise on the loom.

Weft – the sideways yarn that’s on the shuttle and passes through the warp to create the fabric.

Shuttle – what you wrap the yarn around to run it through the warp.

Heddle – each thread of the warp is run through the heddle to separate the yarn; also referred to as Reed.

Rigid Heddle – a fixed panel that separates and moves the warp threads. It also acts as the beater to compress the weft threads with each pass of the shuttle.

Shed – the separation between upper and lower warp yarns through which the weft is woven. 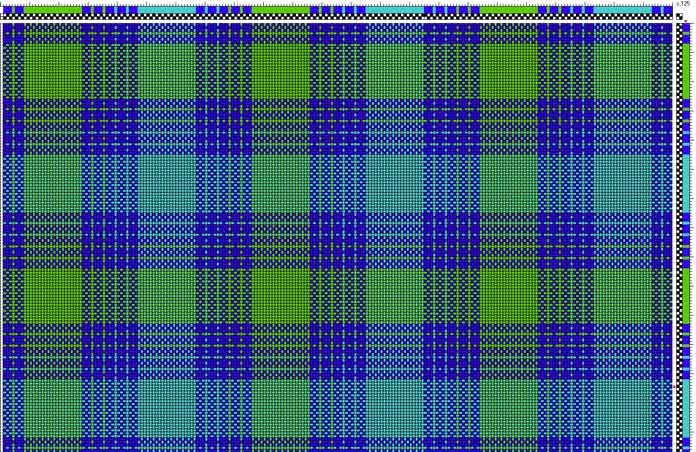 Image from the weaving software of my plan

Once the design was finalized, I entered my desired measurements into a spreadsheet I prepared, which in turn calculated the yardage needed for each color. My plan was to make a wrap approximately 16” wide x 72” in length, to wear like a stole, but with enough length to allow it to be thrown over a shoulder. After entering all my numbers into my spreadsheet, it suggested I needed approximately 350yds of Frayed Denim, 237yds of Citrus Leaf and 308yds of Key Lime. This is an approximation, so it’s better to err on the side of caution and up these numbers by about 10%. A skein of Magnolia is 361yds so that meant I needed 1 skein of each Citrus Leaf and Key Lime, and 2 skeins of Frayed Denim.

After I had all the information I needed, it was time to ‘dress the loom’ by putting on the warp and threading it through the heddle, and loading 3 separate shuttles with my colors. Then I was ready to sit down and weave, which is the fastest part of this entire process. It took far less time to actually weave than all the preparation time, and significantly faster than knitting a stole of this size. 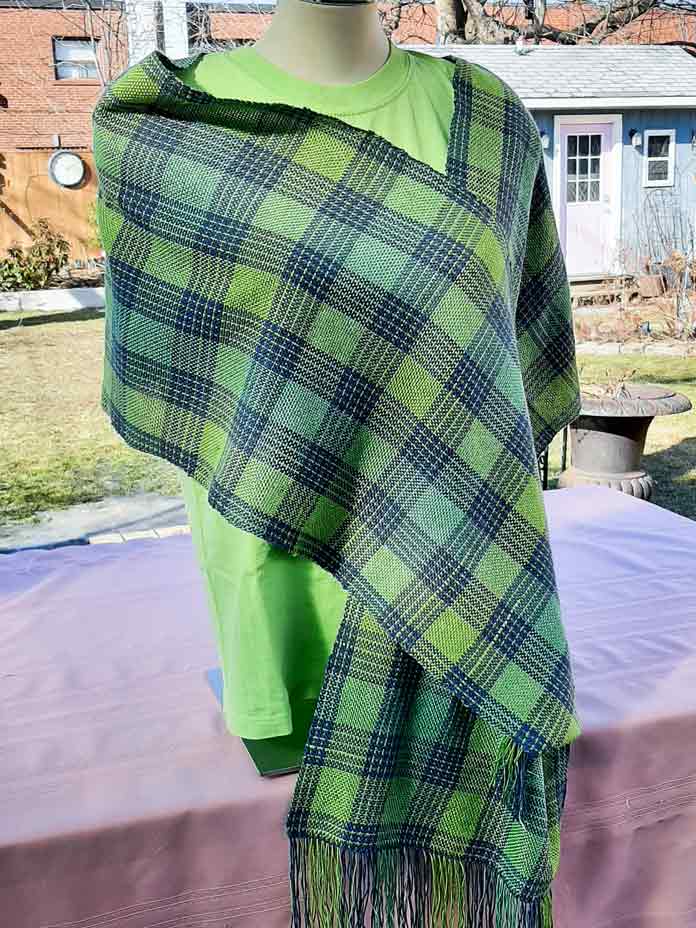 The finished wrap is very soft and satiny to the touch and I love how the three colors of Magnolia worked beautifully together. My finished measurements turned out to be 14½” wide by 77” in length before laundering and without the fringe. I expect it will be shorter after washing it which will compress the threads together somewhat. I hem stitched the beginning and the end, but haven’t decided what to do with the fringe. I don’t intend to leave it that long but until I decide, I won’t shorten it. I may twist the ends together or tie them into groups, both of which are easier to do when it’s long. I may just cut them back to 1” but I have plenty of time to decide before the warmer weather actually gets here. And I did need to go into the second skein of the Frayed Denim to finish the project, but 1 skein of each Citrus Leaf and Key Lime did the trick. 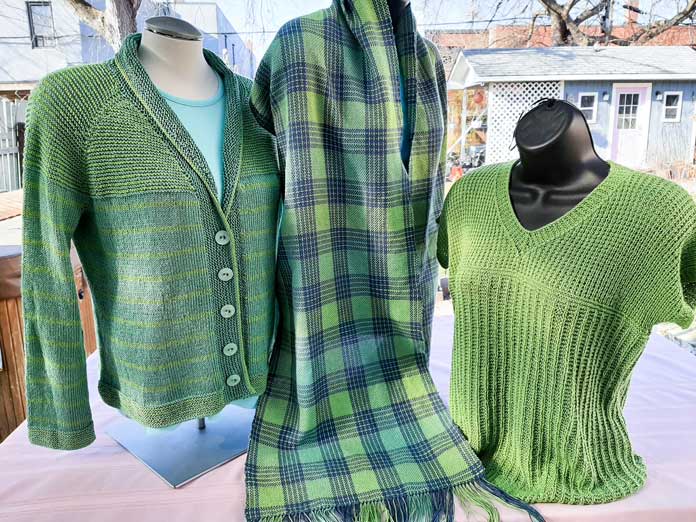 My ensemble is complete – the Paulie cardigan, a woven stole, and the Cherries on Top T-shirt, all made with Magnolia in my favorite summer colors.

I’m really pleased with how well these projects turned out. Working with Magnolia was wonderful and I love the colors I chose. If you recall back on Day 1, I stated that I changed my project plan a little once the yarn arrived. I had originally planned on knitting a tank top, but changed to the T-shirt. Now that everything is done and I have a little bit of each color left, I think I’ll make a tank top. If I’m short on yarn, I’ll just have to take a trip to my LYS and ask for another skein of Universal Yarn Magnolia. Though, I expect I’m likely to leave the store with more than a skein once I see some of the other 14 colors.

I really enjoyed knitting and weaving with Magnolia and I hope you enjoyed sharing my experience. Until next time, happy knitting!

Go back to part 4: Substituting yarns when knitting from a pattern: How to make the switch

Substituting yarns when knitting from a pattern: How to make the switch

Knitting with the NEW TRUVA Universal Yarn is TRULY luxurious

The strength and beauty of Odette make...