After several years of winding yarn cakes using a generic wood swift, I was getting tired of several things when using it. My swift was made of unpolished birch, that although it wasn’t obvious at first sight, it was somewhat rough. It never ruined the yarn, but the yarn would at times adhere to the wood.

It was also rather noisy when spinning, wood against wood, and offered a little friction too.

I came across the Knit Picks Yarn Swift, and from the photo, it looked like it was very smooth. I thought I should try it out. 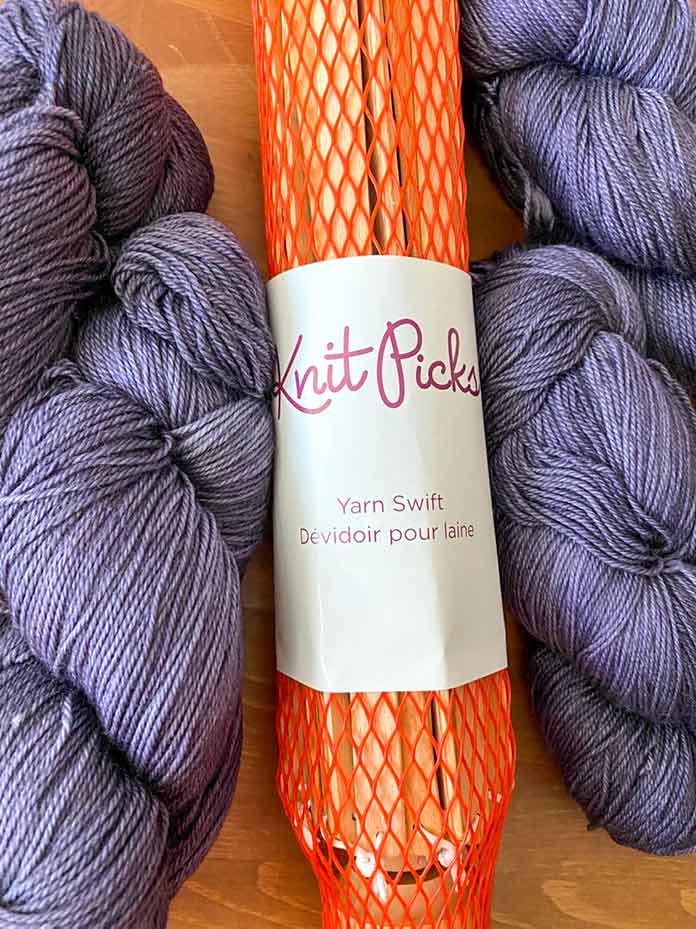 For an avid knitter trying out KnitPicks Yarn Swift is quite an experience!

A few years back (yup, I’ve had this yarn for a long time) I had asked the wonderful yarn dyer, knitting designer and regular participant of ANPTmag (and all-around needle artist), Jacqueline Grice of KnitSwiss Yarns, to dye yarn for me for a future pullover in an eggplant color. Although you can’t tell it’s that dark from the photo above, check out the photos below, it’s a better rendition.

So I thought of using this yarn to try out the KnitPicks Yarn Swift. When I first pulled out the swift, I noticed the smooth wood, the swift is made of laminated birch wood, my pulse was starting to pick up from the excitement. For an avid knitter, winding yarn isn’t a chore, it’s one of the many exciting steps towards wearing a fine hand-knitted garment to cherish for a long time.

Getting back to the swift, here are a few details about it. It measures 26″ in diameter, 68″ circumference and 26″ tall when open. Clamp opening fits tables up to 1½″ thick. 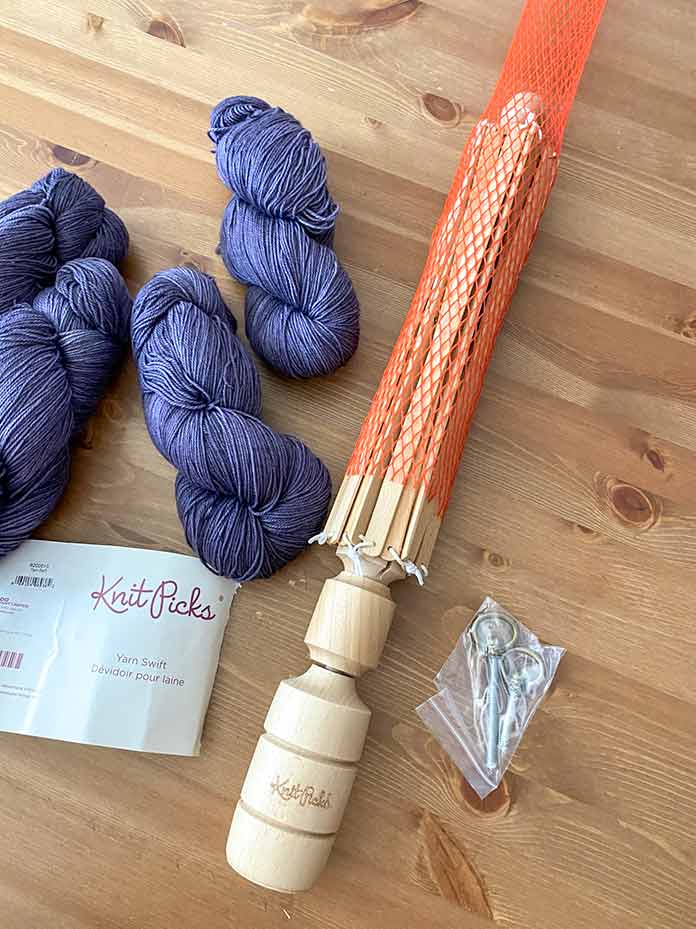 KnitPicks Yarn Swift is made of laminated birch wood and for added durability, the swift features metal hardware.

For added durability, the swift features metal hardware. There’s a metal anchor for the metal screws, and the metal screws feature a plastic stopper at the end to prevent scratches when clamping the swift onto a table. Bonus! 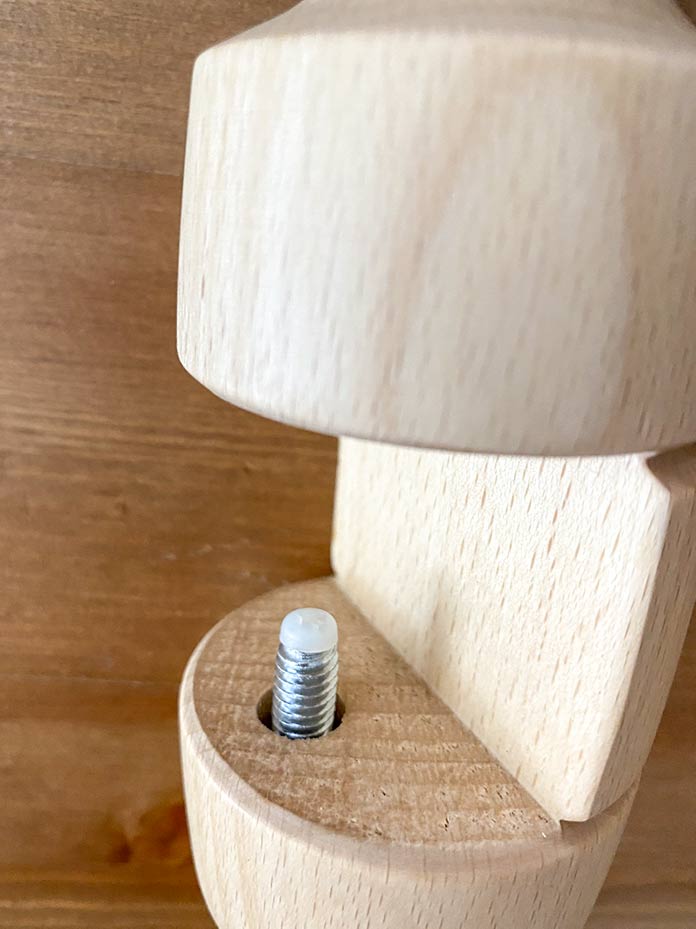 The metal screws feature a plastic stopper at the end to prevent scratches when clamping the swift onto a table – very thoughtful.

I have plenty of room to wind yarn in my sewing room, and I was happily winding yarn when it occurred to me, no noise and no friction when using the KnitPicks Yarn Swift! The lamination of the birch wood is what makes it spin, well, swiftly and silently! 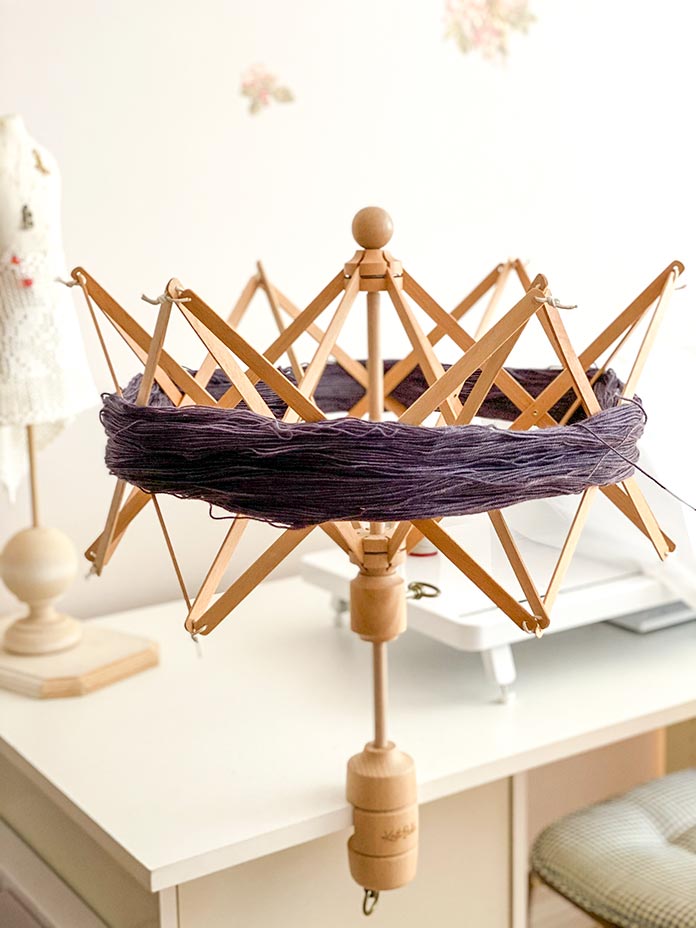 I have plenty of room to wind yarn in my sewing room, and I was happily winding yarn when it occurred to me, no noise and no friction when using the KnitPicks Yarn Swift!

I also found that the yarn had no chance of sticking to the wood, wonderful! 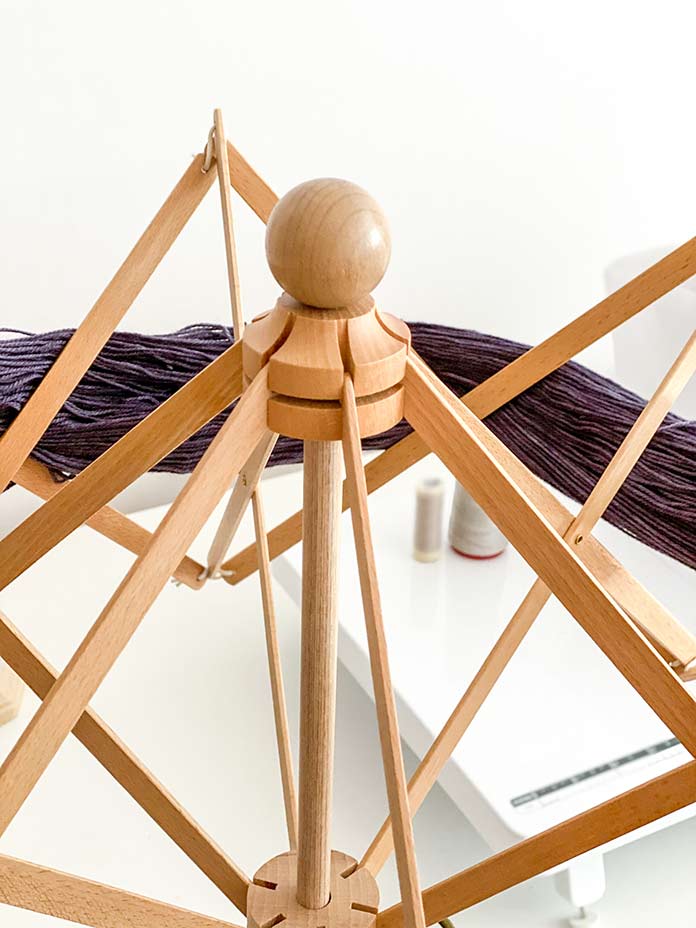 Thanks to the laminated birch wood, the yarn doesn’t snag on the smooth swift.

The KnitPicks logo etched in the wood won’t do anything to help you wind your skeins, BUT it’s a detail that adds a fine touch to a very smooth yarn swift you’ll use for years to come.

Now to knit something with the yarn… 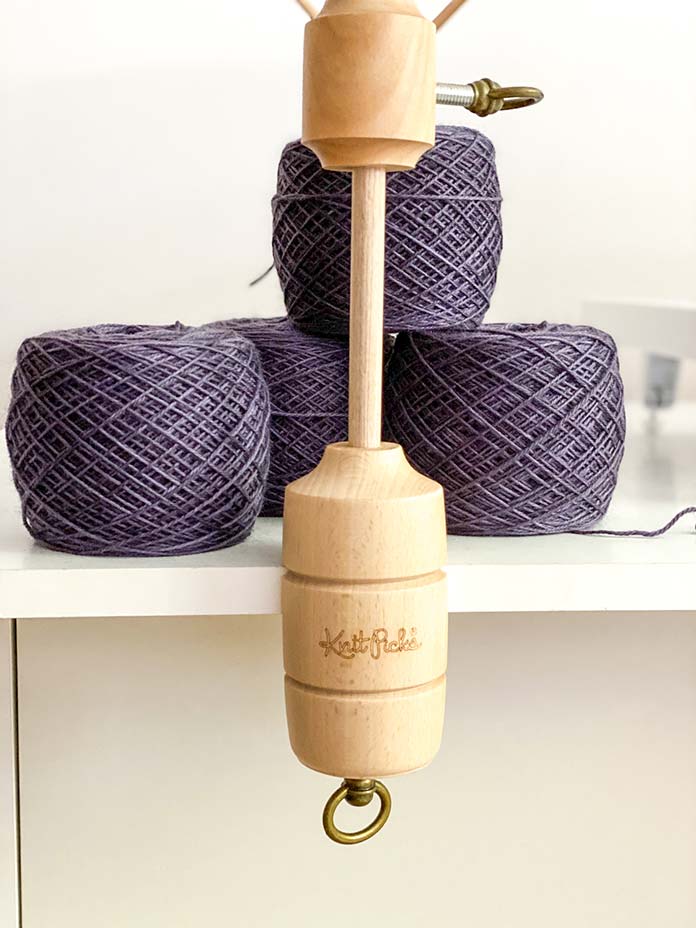 The KnitPicks logo etched in the wood is an elegant touch.

Carla A. Canonico is the Publisher and Editor-in-Chief of A Needle Pulling Thread Magazine, QUILTsocial.com, and KNITmuch.com.

Feels Like Butta yarn knits up soft beyond belief!

Knitting a Mandala Baby DK sweater from a schematic...

Knitting a Mandala Baby DK sweater from a schematic

How to plan a knitting project with a long-span,...

Click the image below to read the issue FREE online at any time. PDF download is also available FREE but only for a limited time until October 31st! See all our FREE Magazines HERE.

Turning a knitted dress from Playtime into...