I really love doing technique posts and for this one I decided to learn something new and pass it on; arm knitting! When I tell people I knit there are a variety of different responses I get, but more and more frequently I’ve had people say they arm knit. I finally took the plunge and gave this arm knitting technique a try and now I’m going to tell you how I did it! I would read through the whole article once before you cast on yourself. 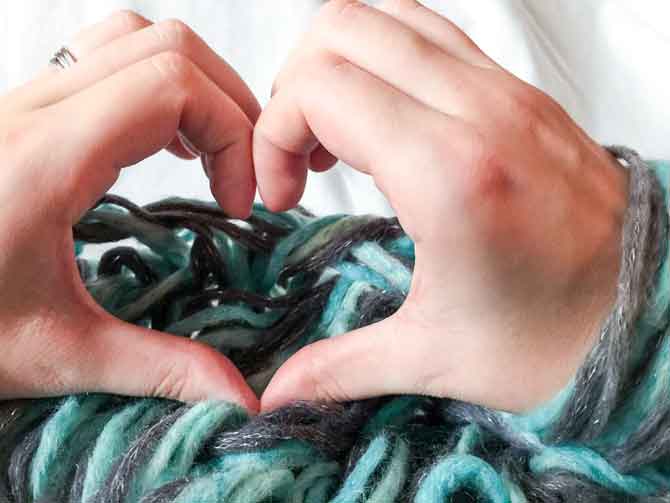 The cast on is just like a long tailed cast on with your knitting needles. Pull out 3-4 arm lengths of yarn; make a slipknot and put it over your right wrist. With your left hand, make a V from your tail and working yarn. Thread your right hand under the closest edge of the V, grab the other strand and pull it back under. Slip that loop over your right hand. Rinse and repeat this until you have about 10 stitches. 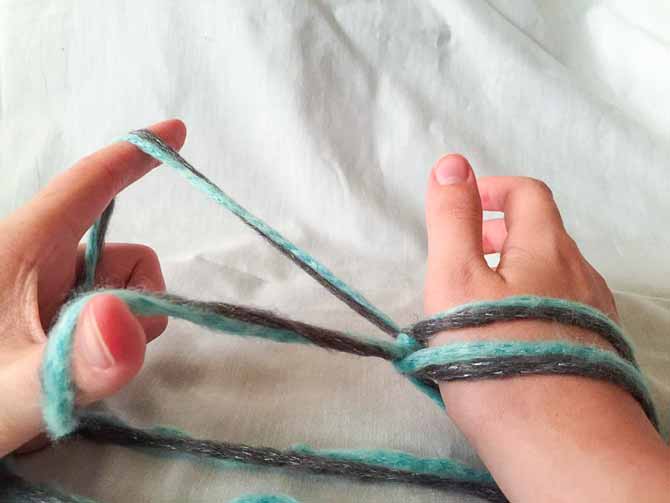 Casting on with the long tailed cast on.

At this point, I thought I was somehow going to have to take all those stitches off my right arm and thread them onto my left. After all, if I were knitting like normal, I would have turned my work and knit back along the way I had come. Luckily this wasn’t the case. In order to knit you simply have to hold the working yarn in the hand that has all your stitches, then you slip the loop over your hand (while still holding onto the yarn). 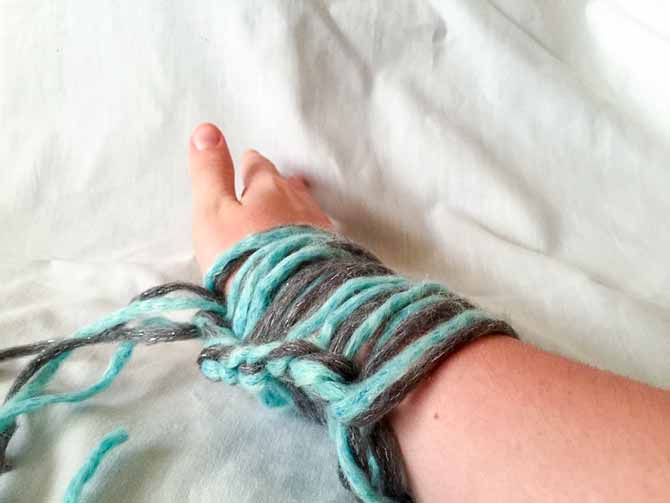 This creates another stitch, which you slip onto the opposite arm. Tug your working yarn to tighten the stitch a comfortable amount. You continue this until you have worked all the stitches on one arm and simply do the same but in the opposite direction. Binding off is the same with your hands as it would be with needles. You K2, then slip the first stitch over the second. 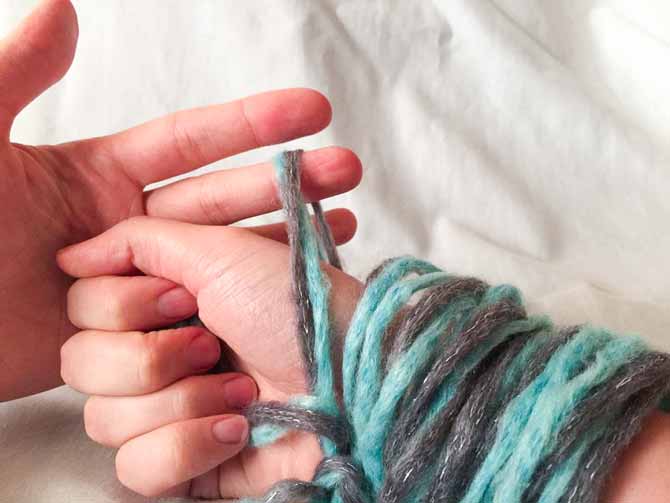 This creates another stitch, which you slip onto the opposite arm. Tug your working yarn to tighten the stitch a comfortable amount. You continue this until you have worked all the stitches on one arm and simply do the same but in the opposite direction. Binding off is the same with your hands as it would be with needles. You K2, then slip the first stitch over the second.

I would highly suggest making sure you’re settled before casting on an arm knitting project because it isn’t as easy to put your knitting down when it’s looped all over your arms and wrists. You’re essentially hand-cuffing yourself with knitting. I realized this when I was about half way through my ‘swatch’. I had been expecting a friend and realized that should she appear at my door, I would have all this arm knitting and two balls of yarn to carry with me to answer the door! 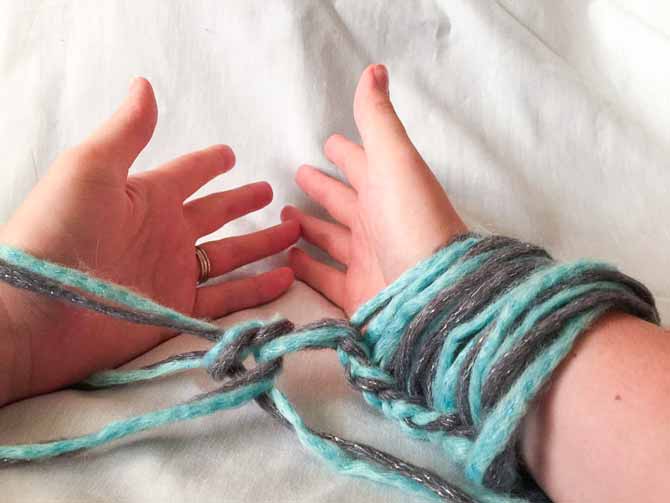 Knitting in stockinette with your arms is very similar to knitting lace. It looks like a garbled mess, but you just can’t see the pattern yet. Lace reveals it’s true nature after it’s blocked and with arm knitting you just have to keep going. That being said I used four strands of Red Heart’s Boutique Infinity yarn. The yarn is bulky, but your arms are quite big needles. I also noticed that when I first started out, I wasn’t pulling the yarn very tight because I was scared I would have to cut myself out of a tangled mess if it got too tight. Be careful not to cut off any circulation, but I found you could usually find some slack in the knitted fabric if you just pulled the stitches a bit. As a result, my gauge at the beginning was much looser than my gauge at the end. 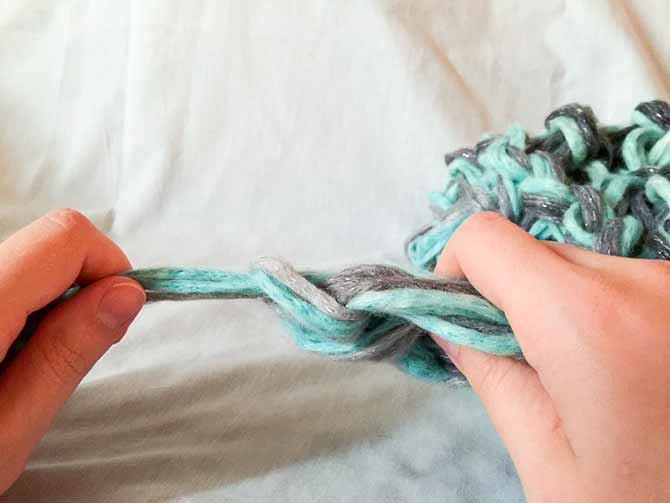 Cut the yarn and make your final loop so big the tail slides out and you simply have one long tail. Weave this in.

I found it useful to remind myself that this was just knitting and if I ever got lost I could simply think about what I would do if I were using knitting needles. I made a couple mistakes and needed to tink back and fix them. Tink-ing back was interesting because usually with my needles I pick up the stitch underneath, then pull the yarn out, but for this I had to pull the yarn out first and grab the stitch. I also dropped a stitch, which I just picked up like normal. When you’re going back and forth in this manner, you’re working up a stockinette stitch. You never turn your work so there are no purl stitches!

Finished ‘swatch’ with twisted stitches and all!

I didn’t expect it, but I had a blast trying out this arm knitting technique. It’s a very open weave but an interesting experience. This would be an excellent place to really look at the mechanics of the knitted stitch. The huge yarn makes it easy to follow; this could be an outstanding place to practice weaving in your ends!

6 Benefits of Using Scrubby Yarn in...

4 tips to organize your holiday knitting