Yesterday I covered the characteristics of Radiant Cotton. This is a double knitting weight luxury cotton yarn by Fibra Natura that comes in skeins, or hanks.

Knitting from skeins is a challenge, and is really not recommended. In today’s post, I’ll show you how to turn your skein into a cake from which you can knit! 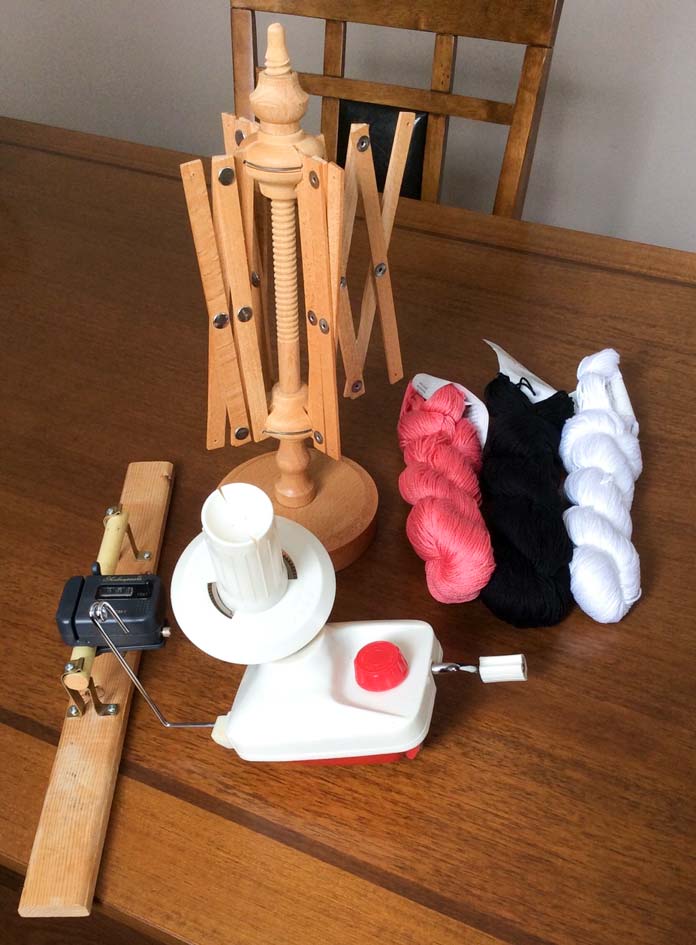 A few tools will turn the skeins on the right into knittable cakes of yarn.

When I was young, my grandmother would have us hold open a skein of yarn with our little arms, then she would go around and around them, winding the yarn into a ball. When we weren’t there on weekends, she would use a chair back or a large, tapered lampshade. She’d drape the skein over the stationary item, and wind away. This method made very spherical balls that would roll away while you knitted, unless you trapped them in a pitcher or bucket. We sure could have used a yarn bowl back then!

When I started to knit, I invested in a yarn winder, the red and white object in the photo. I’ve had that piece almost 40 years, and it has served me very well. It reminds me to impart this bit of wisdom: Invest good money in quality knitting tools, and you’ll only need to buy them once!

The make-shift looking stick on the left in the photo isn’t instrumental to winding a skein. You’ll see why it’s there in a minute, but I want to explain the “Shakespeare” box mounted on the stick. It’s a fishing line meter. If I have a skein that doesn’t have yardage, I can run it through the meter to get that piece of information. The skein tag tells me that Radiant Cotton has 203 yds [186m] in a 100g skein, so I won’t need the meter.

A yarn winder isn’t fully useful without that wooden tool at the back, beside the skeins of yarn in the photo. It’s called a swift. It does 2 important things: it holds the skein in its scissor-like ”arms”, keeping the skein from dropping to the table in a gnarled mess, and it allows for the smooth transfer of yarn to the yarn winder. 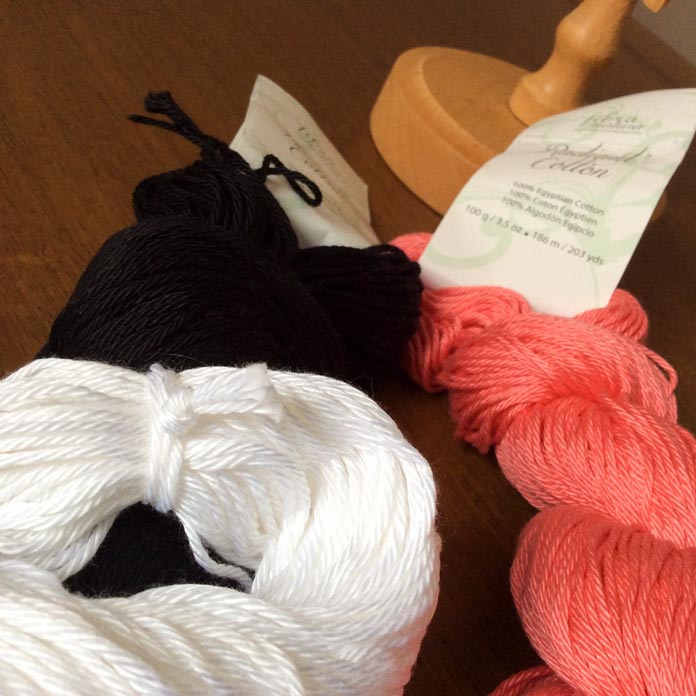 Skeins are knotted in several places to keep the strands organized. The first step of winding a skein is to remove the ties.

The first thing to do is untwist the skein by taking the end with the ball band through the loop beneath it. Lay it out in a “necklace”, locate the knots, and untie them. 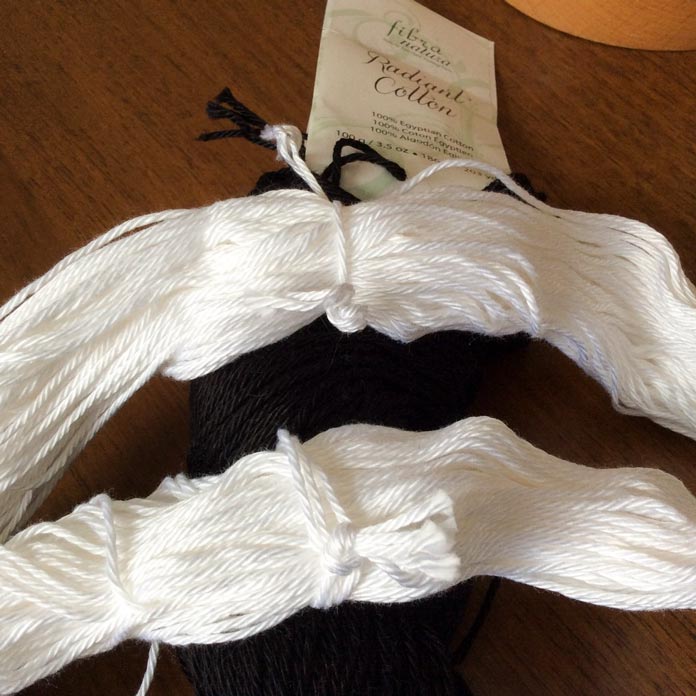 Both knots have been located. The upper one has been untied.

In the case of Radiant Cotton, each knot includes a skein tie, and one end of the skein. Remove the skein tie and open up the arms of the swift a little so it can receive the skein. 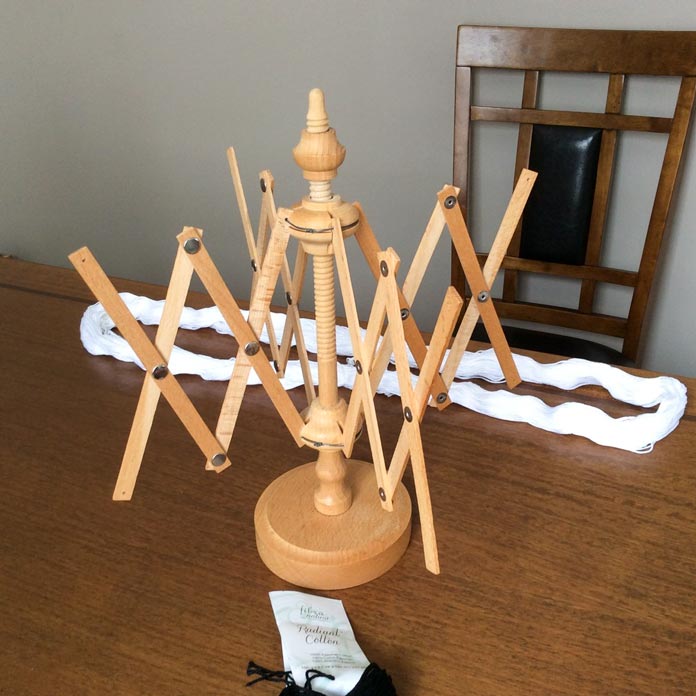 The arms of the swift have been opened up to receive the white skein in the background.

Drape the skein over the swift, so that it rests in the “V” of the arms. I hold the skein in one hand to control the loose end while I place it over. Once I’ve got the loop over the arms at the width where they are, I feed the remainder of the skein as I adjust the arms out to accept it.

Before winding, the key is to have the tension of the arms tight enough to hold the yarn on the swift, but not so tight that the yarn binds in the “V” of them. 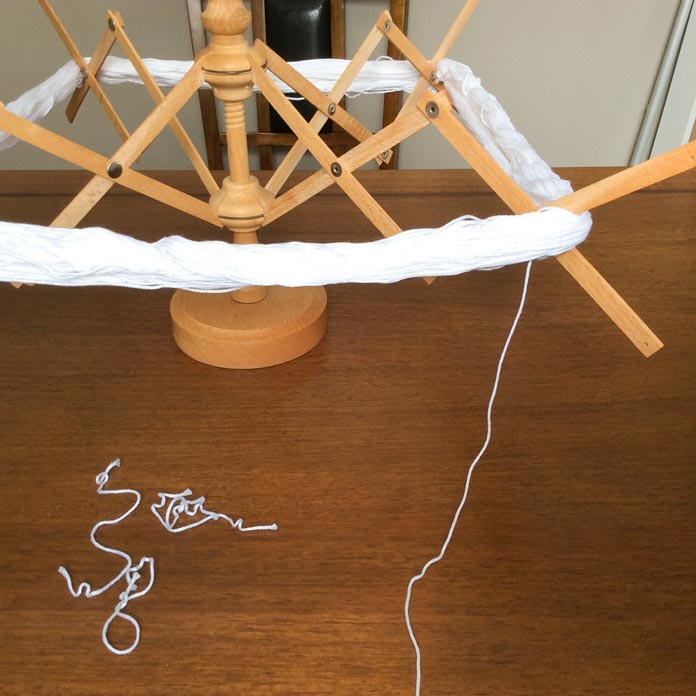 The skein mounted on the swift, with the skein ties discarded below.

The next thing I do is wind off a round by hand, making sure that the yarn feeds off each of the 4 ”arms” from the outside, not from underneath the stack of strands. It would be difficult to wind off the strand shown in the photo above! 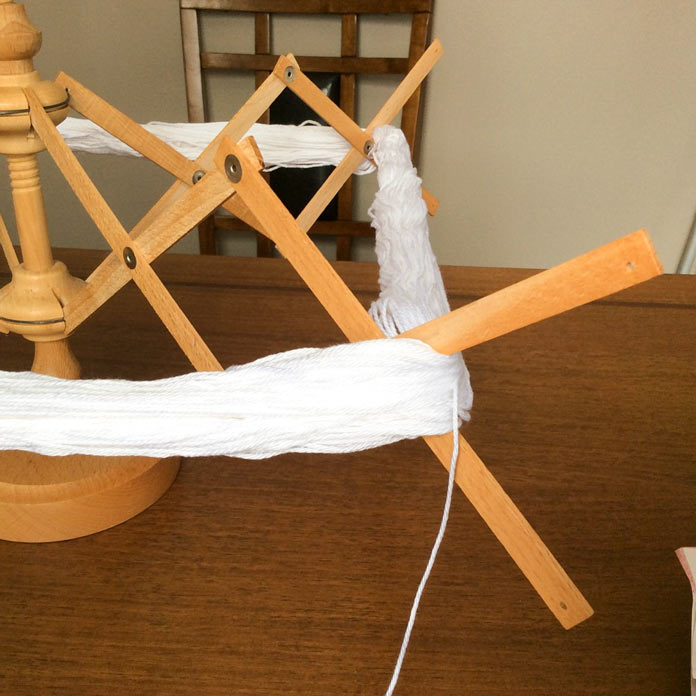 It’s better to have the yarn feed from the outside of the “arm”.

Once I’m happy with the arrangement of the strands, I wind off another round or two by hand, just to be sure the yarn is flowing smoothly. It’s worth noting that I could knit from the swift at this point, but it would make my project much less portable, and it’d take up a lot of space near the knitting chair!

So, to make a more compact format for my yarn, I thread the yarn end onto the winder, and, holding the strand in my left hand, I wind up the loose yarn from the table top.

Hold the yarn strand lightly in the left hand while winding with the right.

I hold the yarn as in the photo above, throughout. It helps the yarn wind evenly off the swift, and I can feel any knots in the yarn (I felt only 1 in the 7 skeins of Radiant Cotton I wound). I might use more tension if I was using a different yarn, but I generally use just enough tension to guide, not to impede the yarn.

I wind slowly at first, until I’m sure the yarn isn’t going to snag on itself or on the arms of the swift. As the yarn builds on the winder, the circumference of the forming “cake” will cause the swift to speed up.

Once all the yarn is off the swift, I make sure that the strand of yarn anchored at the top of the yarn winder shaft will remain available. I loosen it and drape it off to the side, then fold the skein tag, sit it on the top of the shaft, and slide the cake of yarn up over it.

This is a surprisingly important step, especially if you plan to store the cake for a period of time! 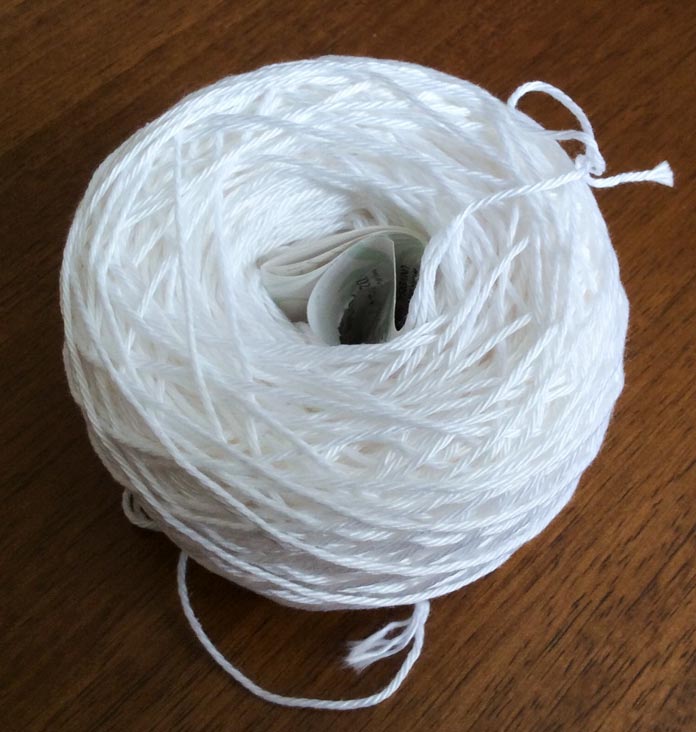 A frosty white cake of yarn, with the skein tag tucked inside, and the center-pull strand coming out of the top right.

There you have it! My instructions may have needed a lot of time to describe, and sound like a lot to implement in a short period of time, but I assure you this process doesn’t take a great long time. I wound all 7 skeins of Radiant Cotton (1421 yards of yarn) in just about a half hour.

This is part 2 of 6 in this series.
Go back to part 1: A Radiant (Cotton) knitting experience

Go to part 3: Fun with knits and purls and Radiant Cotton

Fun with knits and purls and Radiant Cotton

Fun with knits and purls and Radiant...

Finding an alternative to acrylic yarn for...