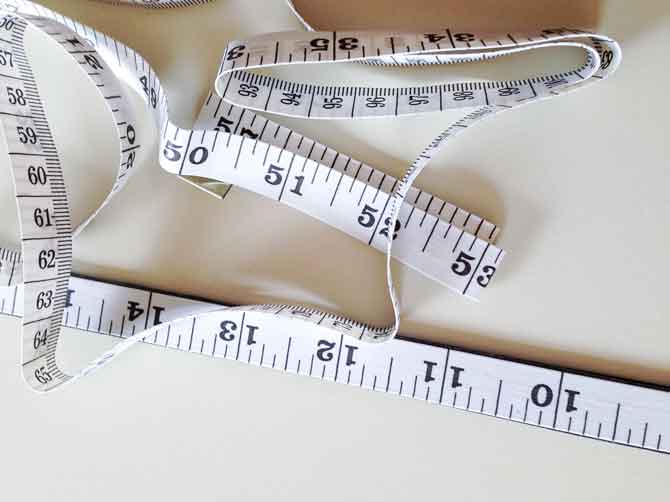 Ready to measure the 5 centimeters…

Knitting is a cultural thing. The thing is, because I’m used to « knitting » in an English world, YouTube is my best friend when it comes to looking up something I don’t know how to do. I like to say that if « mom is not available, go to YouTube ». That’s how I would supplement my reading about short rows, Magic Loop and stranded knitting.

BUT, if you think about it, most of the videos available to knitters are in English (mostly), particularly when it comes to knitting with circular needles. I thought I had been clever in thinking my course through and providing all sorts of links to the many on-line videos available to the English speaker.

And here’s where I failed miserably. Italians speak Italian, not English.

And there’s more. Oh yes. I discovered that knitting instructions are a cultural thing. It’s a language, and language is culture. Failing to grasp that, you fail to communicate.

Although Italians do abbreviate, they still essentially write a sentence, starting with a verb, an object and an adverb. And that’s how Italians will understand knitting instructions, in full sentences.

I spent a lot of time devising and writing out a list of Italian knitting abbreviations that mirrored the ones used in English, so that k2 now read 2dir (instead of the lav. 2 m al dir.). I went over the abbreviations with the class, confident that everyone had understood. Did I mention that the participants told me that they didn’t read knitting instructions?

I also discovered that each culture favors certain knitting methods over others. For instance, Italians love to cast « tubulare » (essentially double sided knitting for hems, sock cuffs, sleeve cuffs, hats, etc). It’s a great way to cast on, which is double and ribbed, very stretchy and clean. I have not seen it in any of the English patterns I’ve worked.

On the other hand, I have seen a revival of using short rows which make for interesting patterns. Not so in Italian knitting magazines. (The fact that I could not find the Italian equivalent of wrap and turn should have sent up the proverbial red flag). Short rows are rarely used.

This, I did not know. 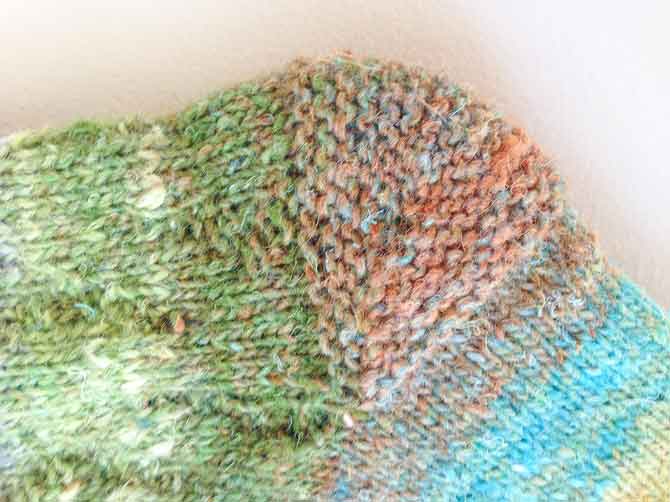 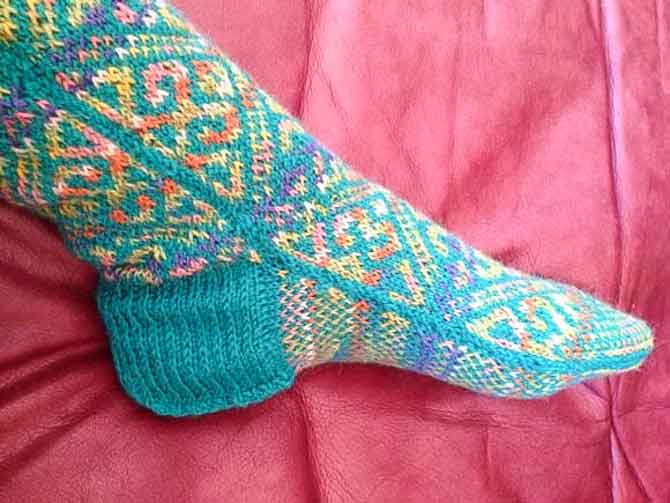 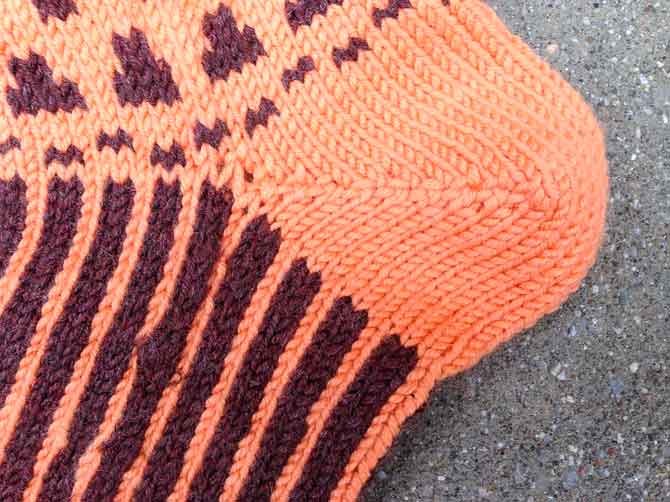 I thought we were on the same « cultural knitting wavelength » so to speak, and ready to tackle the short row heel. The homework was done right and socks were 5cm short of the total foot length and ready to be heeled. Two Mondays left into the 5-week course and we were going to turn the heel, with a simple short-row – I think this is the simplest way of knitting a heel. Heels, however, according to Italian knitters are done with flaps, and no matter how many pairs of socks I brought to demo the short row method, the participants were unconsciously expecting some form of flap to happen and then stitches would be picked up. It took almost a whole class (90 minutes) to master this technique. Maybe being a ‘novice’ knitting teacher did not help matters. But I tried.

Mind you, we were still knitting two socks at a time, but now the needles had become familiar to all, and
nobody bothered with having one sock hang there while the other was having its heel worked on.

The nervousness of the unknown had dissipated. Lots of sweating ensued (it became a recurring theme in our classes), but now there was laughter and joy of discovery when someone would get it and share it with the group. A collective sense of struggle and achievement was starting to gel in the group and classes were beginning to become a real hoot.

When it became crystal clear that knitting is a cultural thing, teaching knitting became easier. Week 4 and 5 were approaching fast. I was finally confident that the participants would indeed leave with a pair of socks completed, as promised on the flyer. Join me tomorrow: Circular needles rule! Luigina

Try this ribbing to edge your knitted...