Knitting with Alaska – the Choux Cowl

This week, I’m knitting with Rozetti Yarns Alaska, a light and airy yarn that wraps one in warmth and softness.

The swatches made on Day 2 confirmed the lightness and aura of the knitted fabric. So today, I’m starting the Choux Cowl, which is a free pattern, designed specifically for Alaska yarn, I chose to knit my cowl in colors Frozen Pond (light blue) and Stormy (dark blue). 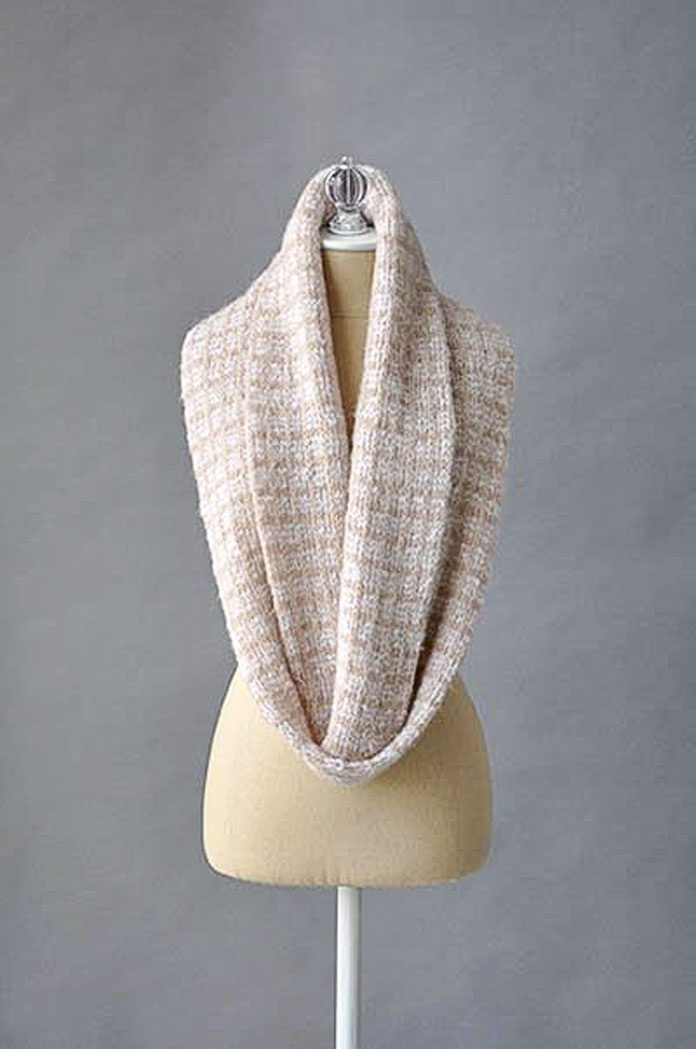 I like wearing long cowls in the winter because you can wrap it around your neck multiple times for warmth in the outdoors, and easily unravel it and let it hang as an accessory when indoors. Quite often I find that an unraveled scarf will slide down and off when dangling, but a long cowl will stay put. Also, if you forget your hat on a chilly day, you can wear it over your head and then wrap it around your neck to surround you in warmth.

The Choux Cowl is knit as a tube in the round. There are two options for finishing. First, you can sew the ends of the tube together for a fast, simple finish. If you prefer a more professional, seamless look, you can do a crochet provisional cast-on with scrap yarn and graft the ends of the tubes together. For complete pattern instructions, you can download the Choux Cowl pattern by clicking the photo above.

For this project, I’m using 2 balls of the Main Color (Frozen Pond), 2 balls of the Contrasting Color (Stormy), a US6 [4mm] 24” circular needle, waste yarn and crochet hook for the provisional cast on, and a stitch marker.

Pattern gauge is noted at 20 sts and 32 rows over 4”, however, it’s not really important for this project, but it does affect the overall size. My gauge is 20 sts and 30 rows with a US6 [4mm] needle. The finished size is 50” circumference and 12½” in width. If you want to make it wider or narrower, cast on a greater or lesser amount of stitches in multiples of 4.

The pattern for this project is very simple, yet the results are elegant. To begin, I’ll use a crochet cast on with scrap yarn and cast on 124 stitches. Although I haven’t decided on a finishing technique, this cast on gives me options. Being careful not to twist, I place a stitch marker and joined in the round using my main color. Now, I’ll proceed to knit the plaid pattern as follows:

Repeat Rounds 1-8 for pattern until work measure 50” or desired length. 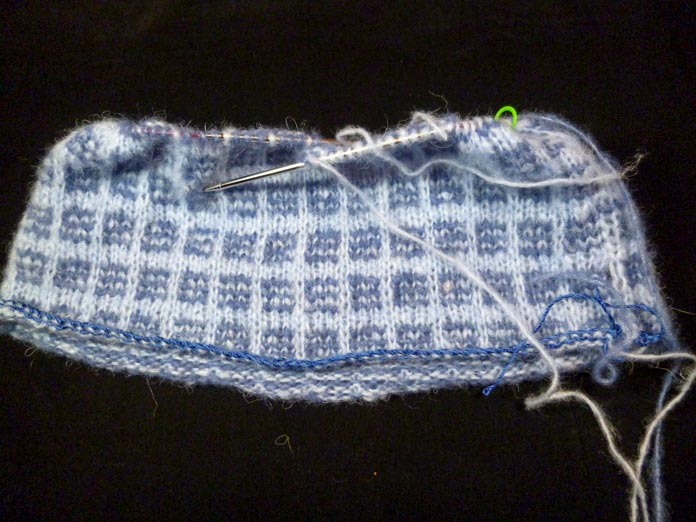 I cast on 124 stitches, using a provisional crochet cast on with scrap yarn.

Being curious about the name of this cowl, I decided to research it. Choux is French and has several meanings, depending on how it is used. Choux (or chou) means cabbage; however, pâte à  choux is a puff pastry, and the expression “Mon petit chou” refers to chou à la crème (cream puff), which is a term of endearment. Both of these expressions are better descriptions for the knitted fabric than a vegetable! As my fabric was growing, the lightness and coziness was more reminiscent of a puff pastry.

Once I reached 50”, it was time to pick up the stitches from the provisional cast on. Using a US3 [3.25mm] circular needle (it’s easier to pick up stitches using a smaller needle), I unraveled the crochet cast on and placed the stitches on my needle. 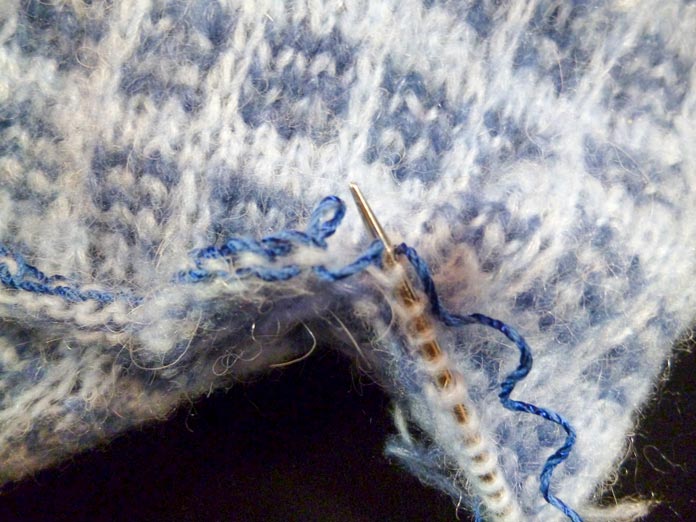 Unraveling the crochet cast on and picking up the stitches

I often use a three needle bind off instead of grafting or even sewing shoulder seams. I decided to try this method on the cowl, knowing that it would not work for the entire roun, but thought I could finish it with a crochet hook. With right sides together, I proceeded. It worked really well for the first half. The second half required the use of a crochet hook to pick up a stitch from each needle and work them together. Again, this worked well for the bit, but as the remaining stitch count decreased, it became more difficult.

Although I managed to complete it in this fashion, in the end, I don’t think I saved any time or effort. It was an experiment that I will not likely do again, however, trial and error is how new techniques are discovered. We tend to only hear about the successes, but I think it’s important to hear about the not-so-successful attempts as we learn from mistakes. My recommendation, follow the pattern instructions which is to either graft using the Kitchener Stitch or sew the two ends together. 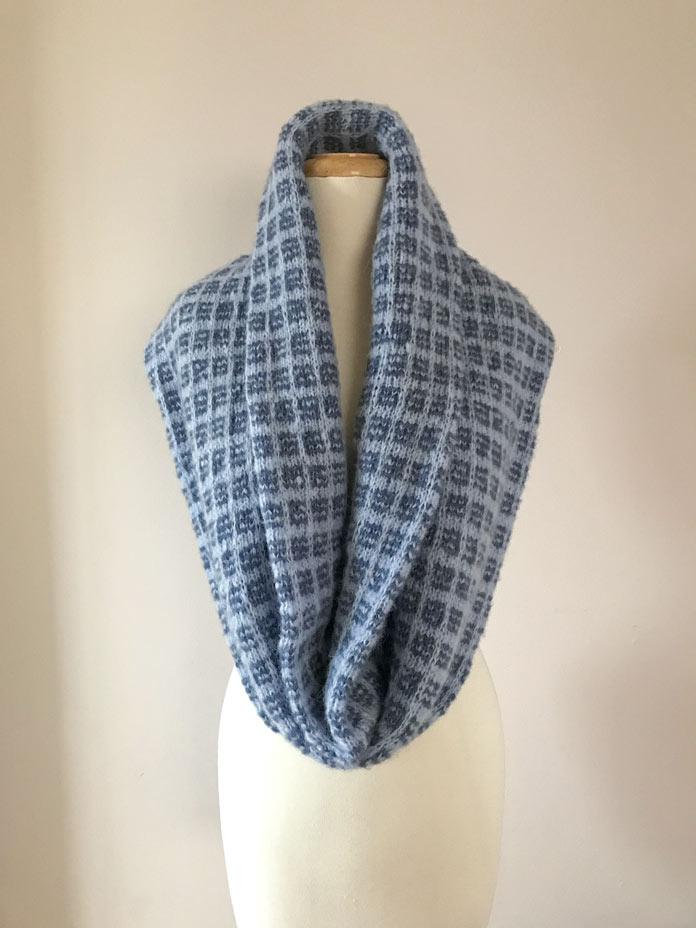 This is amazing! It’s so soft and cuddy, and feels like you’re wrapped in a warm puff pastry.

It’s a little large for my stature, but I do love it. I can see other applications for this down the road. With the double thickness of the tubular construction, I envision a big warm wrap or blanket to snuggle up in on a cold winter’s night.

I love the plaid pattern. It’s so simple, but elegant at the same time. Join me tomorrow as I make a hat using the same pattern, and of course, Rozetti Yarns Alaska! 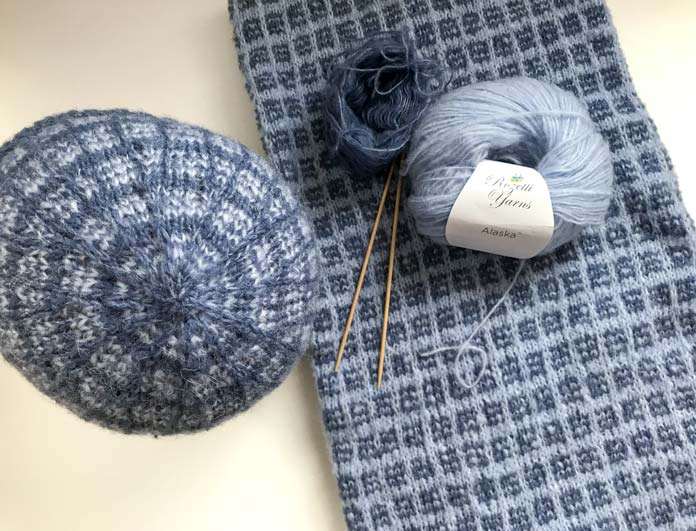 This is part 3 of 5 in this series.
Go back to part 2: 1 trick for easy knitting when knitting with fluffy yarn

1 trick for easy knitting when knitting with fluffy yarn

Knitting a matching plaid hat for the Choux Cowl

A hat pattern designed for all ages (FREE knitting...

Best reference for blocking your knits