In this series of posts, I’m reviewing Clean Cotton Big by Universal Yarn. It’s a bulky tape-style yarn that knits up quickly on size BIG needles.

Speaking of needles, I’ve also been reviewing Knitter’s Pride basix circular needles. You can read more about them in earlier posts in this series, and I’ll say again that I’m really enjoying the smooth, clear birch tips. They’re long enough to rest in my purlicue (honest, that’s the name for the space between your thumb and forefinger! “purl”icue – how appropriate is that?) and long enough to allow me to throw my yarn around the needle tip, as I do.

Clean Cotton Big comes in 8 solid colors and 8 marled colors made up of 1 strand each of 2 of the solid colors. I’ve chosen bright red and white to make this series’ Gingham Baby Play Mat. 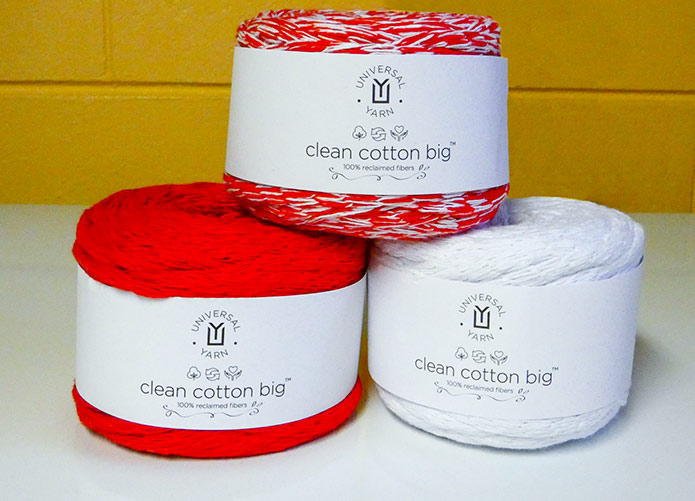 Red, white, and red-and-white yarn will be used for our baby play mat project.

I’ll keep with the gingham theme I did in my sampler from my second last post. Originally I was going to make a tote bag, but, fully loaded it would make a heavy load, so I’ve switched gears to make a play mat with corner “flanges” that can be buttoned shut when the mat is folded.

The mat uses the intarsia technique, as our sample did, but the sample was made with size 15 [10mm] needles, and I’m going to make the mat with size 17 [12mm] needles. 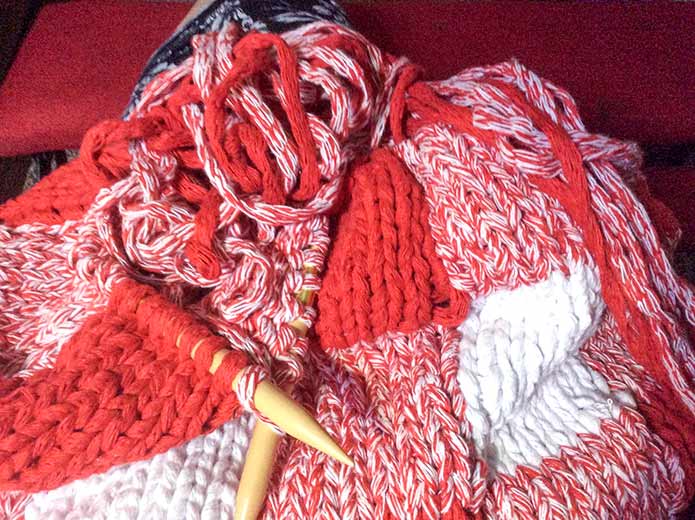 Knitting intarsia can create quite a rat’s nest of yarn!

Instructions are given for the smallest size. Directions for the larger size are inside (brackets).

Gingham block 3 looks like Gingham block 1, but the buttonhole is placed on Row 5. Join in and end off yarns as needed from here on.

For 7 block blanket, skip to Gingham Block 7, where the top button band starts. 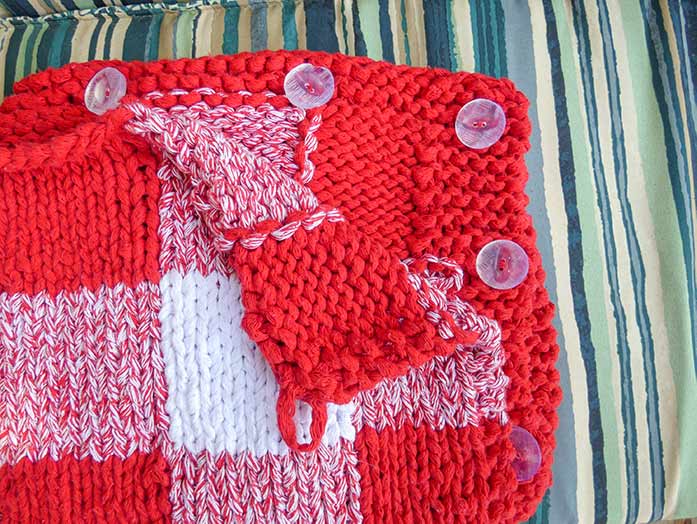 OK. There was a clinker in my thinker, and I somehow messed up my plan for buttoning up the mat for easy travel. To remedy it, I took a short length of the yarn and made a loop in one corner so that when the blanket is folded and buttoned closed, the loop can be wrapped around the corner button to keep it from flopping around. I think I should have put both edgings on the bottom edge of the blanket, instead of kitty-corner to each other.

Top border
With RS facing and ColA, k 5 rows. Cast off all sts and weave in all ends.

Fold blanket into half lengthwise, wrong sides together, then fold in half widthwise. Match edges and mark button placement on the top edge. Sew buttons on securely. Add a corner loop to the exposed section.

I absolutely LOVE the buttons the sponsor sent me for this blanket. They remind me of ice cubes, which is perfect for a summertime playmat! Ask your retailer to order product number 057018LB.

In my next post, I’ll wrap up the series with some clever adaptions to our knitted gingham you can use to make household items from Clean Cotton Big. 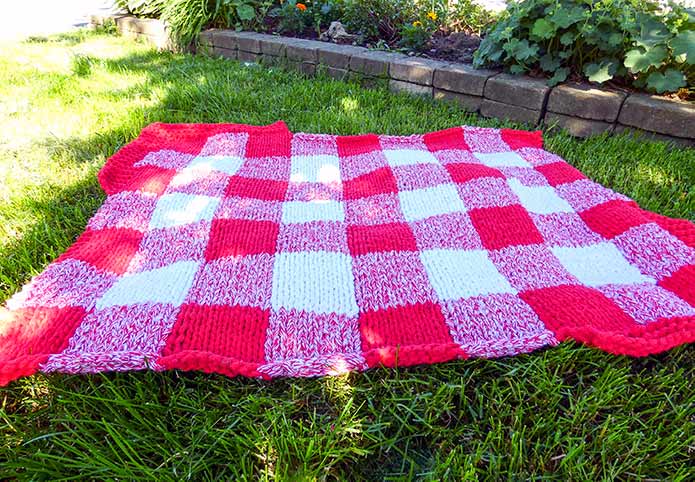 Imagine your little one playing on this mat in the shade of the crab apple tree! I made my mat 9 squares wide by 7 squares deep to ensure I had enough of the marled yarn on hand. The 7 x 7 version would be perfect for a small baby, and the 9 x 9 would be big enough for a child’s picnic blanket.

This is part 4 of 5 in this series

Go back to part 3: What to know about weaving in ends with Clean Cotton Big yarn

Willowwork Cowl: how to knit RC and...