Home » Yarns » What does dropped stitch lace look like?

This week I’ve been writing about knitting socks and dropped stitch lace using Wisdom Yarn’s Prose. Today I’ll reveal what the dropped stitch lace looks like after you drop all the stitches. Here’s a before picture and you can read more details about this in yesterday’s post. 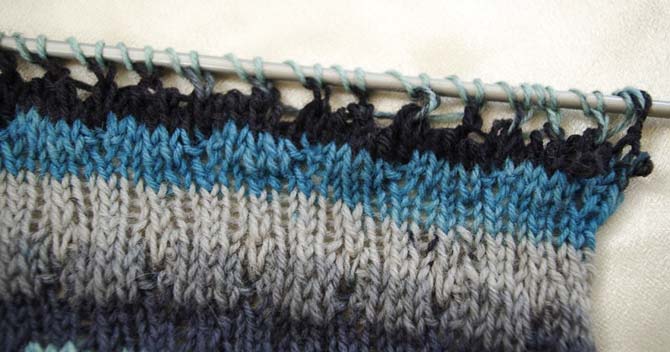 This is a “before” shot of what dropped stitch lace looks like. Get ready for all to be revealed.

And this is what it looks like when I have dropped every other stitch on this row and made a yarn over in each one’s place. 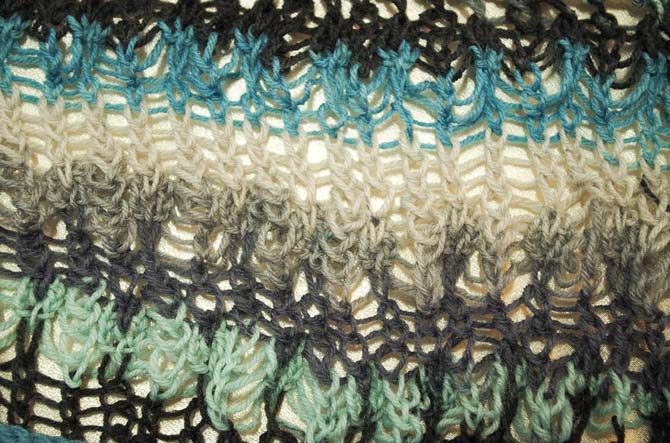 Unblocked dropped stitch lace isn’t really anything to write home about, but get that knitting onto a blocking board or foam and see everything transform into a new look!

In the above unblocked swatch, there isn’t much that is special there, is there? Well, this is one type of lace fabric that truly does benefit from the magic of blocking.

This is what dropped stitch lace looks like when it’s blocked. To add some interest, I had to add these little leaf-like motifs that disrupt the ladders and create an over all polka-dot-like look to the lace.

Prose yarn was perfect for this lace and for blocking because of the wool content. I know that it would have a great “memory” for its blocking measurements and sure enough, the final piece stayed as it should after removing it from the blocking board.

The cast on edge for knitted lace is a little tricky. My first efforts lacked enough “give”.

If you’ve read any of my blog posts from previous weeks or months, you’ll know that I like to learn from my swatches, as they are some of the best teachers in the knitting world.

As you can see above, my cast on was a bit too tight, despite several tries and experiments with different cast on edges. I finally came up with a solution which will be in the pattern below. 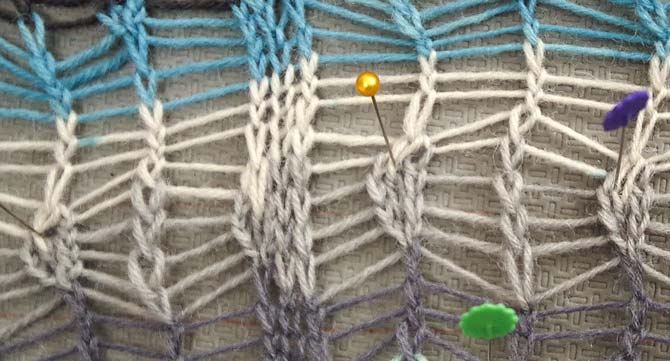 When you make a mistake in dropped stitch lace, there really isn’t an easy fix.

One important aspect of knitting dropped stitch lace is making sure you count your stitches and that you don’t set the work down mid-row and come back to it later. As you can see, I have a column of stitches that I can’t drop. At the top of the swatch (out of the frame of the photo) I worked the wrong stitches together when I was making a leaf motif and I just couldn’t undo that column of stitches below and it affected the whole works. But I remain optimistic that with this pattern you’ll be able to make a lovely version of this lace as a rectangular stole with some colorful self-striping yarn like Prose.

To make this swatch, you need to cast on 27 stitches, but if you’d like to make a cowl or a stole that is a little wider, simply cast on a multiple of 16 stitches, plus an extra 11. Use a long-tailed cast on.

If you’d rather work from a chart, you’ll find one below. The set-up rows are not included, though. 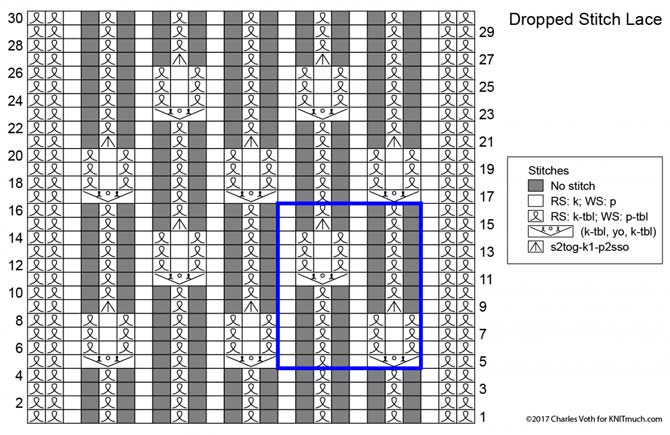 This easy-to-follow chart may be just the incentive you need to give dropped stitch lace a try.

I hope you’ve enjoyed our foray into using Prose sock yarn for toe-up socks and for dropped stitch lace this week. We have some more exciting yarns and ideas coming in May. 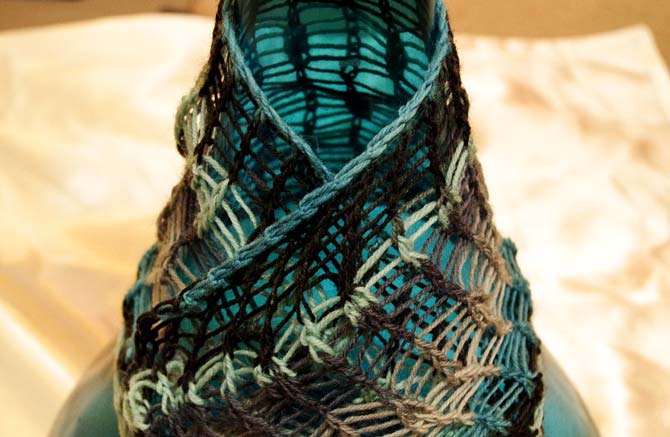 It’s like magic, really, drop stitches in the right places and you get quite the dropped stitch knitted lace.

This is part 5 of 5 in this series.
Go back to part 4: How dropped stitches create a knitted lace pattern – surprisingly beautiful

Get that warm feeling with this knitted...