Home » Yarns » Why working the cables on the Syrah Cowl in Angora Lace is so yummy!

Why working the cables on the Syrah Cowl in Angora Lace is so yummy!

Today, I’m working the cables of the Syrah Cowl pattern, using Wisdom Yarns Angora Lace yarn. The more I work with this yarn, the more I fall in love with it! As a summary of the last couple of days, this yarn is a soft, lofty, plied, high twist yarn. It’s amazing and smooth to work with, and I’m enjoying every minute of it!

I would highly recommend this yarn for any pattern that uses cables or intricate stitch pattern where stitch definition is important.

Yesterday, I worked the ribbing of the pattern and now I’m working on the cables! The Syrah Cowl is made up in 3 parts. You’ll cast on then work the initial ribbing, then knit the cabled body of the cowl and finally end with a ribbing section again. Again, I would recommend adding stitch markers to separate each repeat of the cabled pattern. I found that it can be easily miscounted and errors can be made quick! 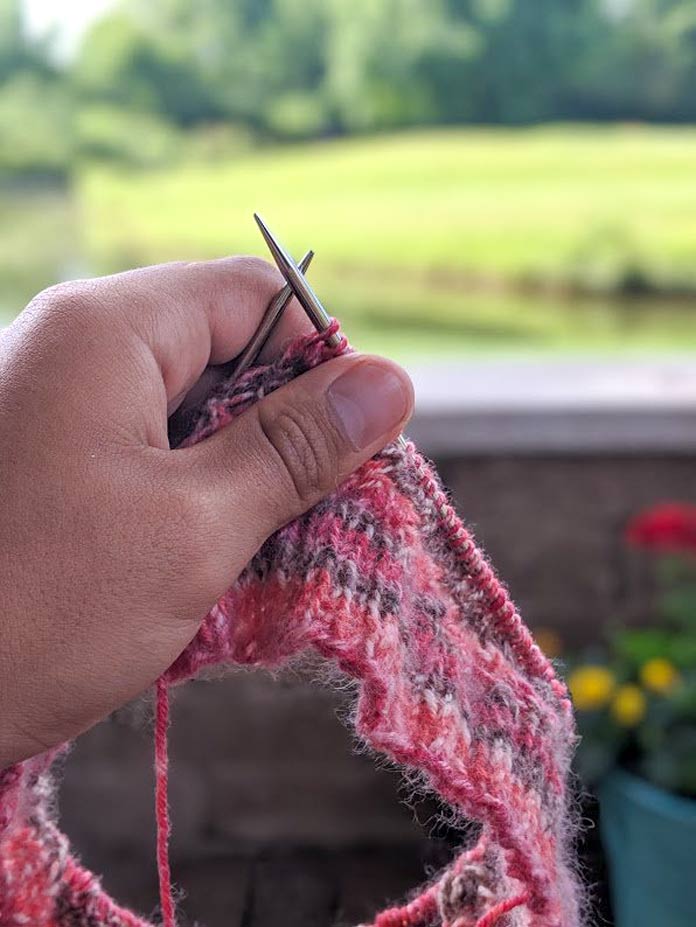 Image of a knitting project of the Syrah Cowl using the colorway Spice Tree. Working the cabled section of the pattern.

Observations about the Cabled Pattern

The cabled pattern incorporated in the Syrah Cowl pattern is a 12-stitch cable, straddled by two eyelet columns. I’m loving it! Personally, I prefer to work cables without a cable needle, but for most yarns, that’s very fussy and hard to do! Not for the Angora Lace! This yarn allowed me to work the cables smoothly, and not have to use a cable needle. Bonus! 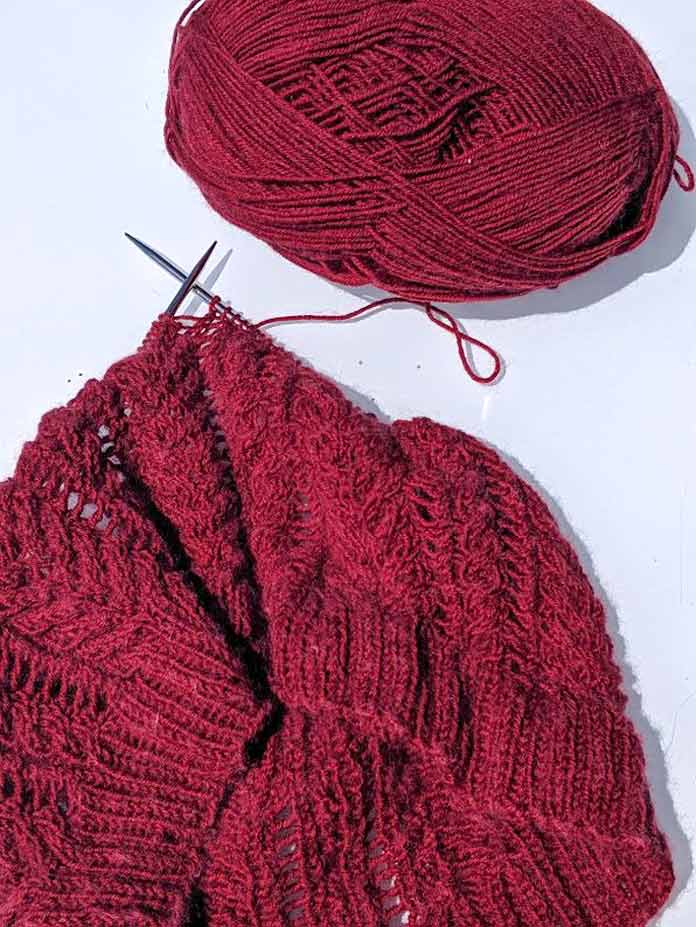 Image of a knitting project using the pattern Syrah Cowl using Angora Lace in the colorway, Merlot. In the image, the knitter is currently working the cabled section of the pattern.

The cable pattern makes pretty tight cables, tight meaning there aren’t many rows in between the cabled rows, but this yarn is perfect for that. I found that it makes the cables more defined and it really differentiates between the ribbing and the cabled section, which was something I was worried about.

Image of the cabled section of the Syrah Cowl, worked in the Merlot colorway.

In the past, I’ve found that yarn with a halo, tends to blend everything together and it’s hard to tell the stitch pattern. As stated before, the Angora Lace is very balanced and seeing the stitch pattern in the Syrah Cowl pattern isn’t an issue!

Another observation I had when knitting the first cowl is that this pattern makes a very deep, lengthy cowl! It’s one of the longest I have knit. So, when knitting the second, I shortened it by half of the repeats. I felt like this allowed for the cables to be more prominent and defined, instead of rolled upon each other. So, if you don’t like thick cowls and are considering knitting this pattern, I would recommend shortening it a little by a few repeats, as desired.

Make sure to join me tomorrow as I discuss the differences between the two different colorways of yarn that I used!

This is part 3 of 5 in this series.
Go back to part 2: Syrah Cowl, swatching for gauge and casting on

Go to part 4: How a yarn’s characteristics influence the look of a knitted pattern

Luke is a longtime knitter and fiber enthusiast, with over 10 years enjoying knitting hats, socks and other accessories. He has been a pattern designer for a number of years focusing on hats and other accessories and completed the Learn-Build-Grow Program (Learn to Tech Edit) by Joeli Kelly. He offers basic and advanced technical editing services. As a young entrepreneur, he founded a nonprofit organization in 2016, called Huggable Happiness and ran a clothing company called Gilligan Corporation.

Syrah Cowl, swatching for gauge and casting on

How to join skeins of Bella Chenille...

Unraveling Unity and Unity Beyond: what makes...