One of my favorite comedy programs on television periodically runs a segment called “Fun with Flags.” Long before this, I had an on-going “affair” with nautical flags, and over the years I’ve collected several books and charted designs for the nautical flag alphabet.

Recently, a very kind colleague asked me to knit him a blanket of a specific flag, the flag of Macedonia – not the new one, the old one.

This made me think about making blankets that represent the flag of a country. It’s a great way to show our patriotism or to display our heritage.

So, I set out to have some fun with flags, which, because of my assignment, led to fun with afghans using Red Heart’s Super Saver yarn, and fun with designing (one of my knitting joys). Join me on this knitting adventure.

So, we’re having fun with three things – flags, afghans, and design. Where do we begin?

They say that when writing an essay, the best way to begin is to draft the closing statement. Sometimes, this approach works for knitting projects, too. 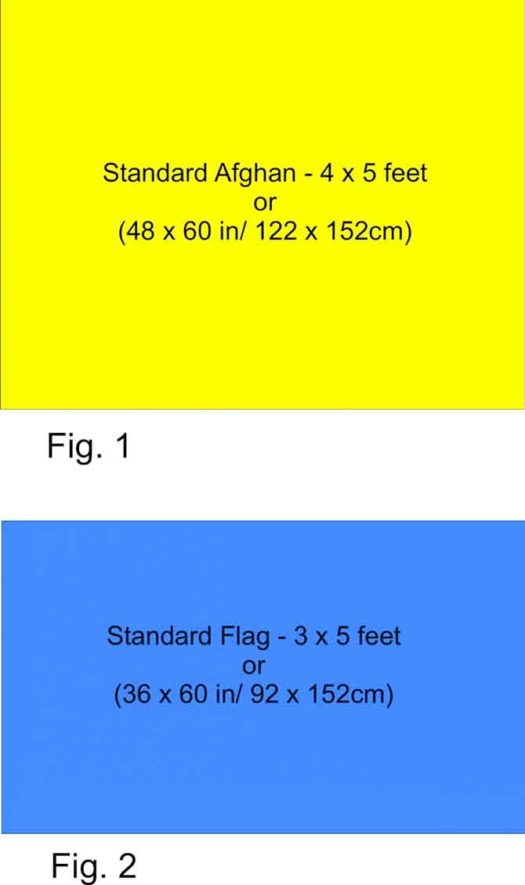 Let’s take a look at these options:

1) Entire afghan is flag – If you want to fit the height of the flag onto the 48″ [122cm] of the afghan, and keep the same aspect ratio for the width of the flag, the afghan will have to extend to 80″ [204cm]. Most sofas and futons are at least 78″ across the back, so if the afghan will be displayed, this is a viable option. This might also be a good design choice if the recipient is tall. 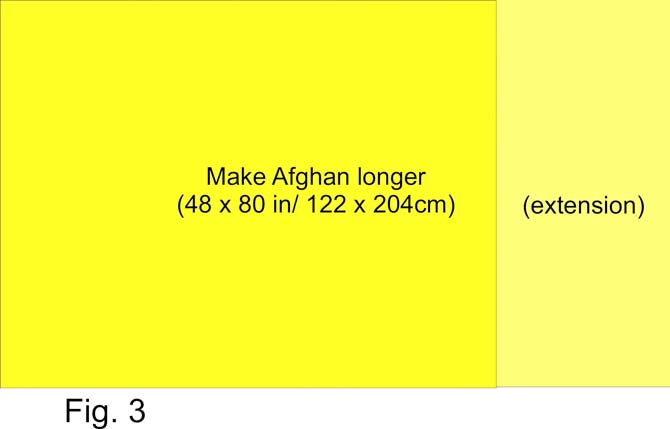 To maintain aspect ratio of a flag, one option is to extend the length of the afghan to 80″ [204cm]. In the diagram, this extension is shown in pale yellow.

Complex flags, such as the Union Jack (Great Britain) or the Jamaican flag, are more challenging to adapt to an all-over design in the standard afghan size of 48″ x 60″ [122 x 152cm]; changing the dimension of the flag changes the angles in the flag’s graphic, which affects features such as crosses and triangles.

Some country flags (Mexico, Ecuador) have a detailed crest featured in the flag. Rather than try to chart an intricate crest, you might want to source out a fabric or embroidered version of the emblem and apply it to the finished blanket.

2) Show the flag on only a portion of the afghan – If you want to keep the aspect ratio of the flag, it can be placed in several ways. You can place it so it takes up the full width of the blanket, either horizontally, or vertically, or you can set into a “frame” of be background color. As with striped flags, the background or frame areas can be made in panels. 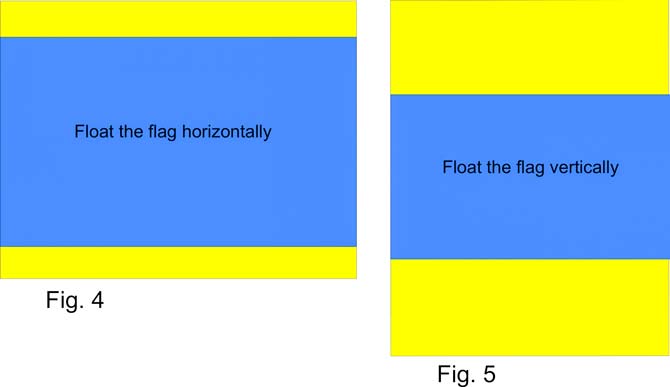 Flags that consist of basic stripes (France, Ireland, Germany) can be expanded to cover the entire surface of the afghan. Flags that have a center motif on a striped or single color background, such as Japan, Canada, or the old Macedonian flag, also adapt well. Flags with stripes give the designer or knitter the option of working the afghan in one piece or in panels.

3) Designing the background – the background, or frame, could be the color of the recipient’s bedspread, sofa, or futon cover, or it could be a neutral such as black, grey, or white. In addition, a textured stitch design, such as seed stitch or garter stitch, can be used for the background.

Take some time to think about how you want your afghan to look, and in our next installment of Fun with Flags, we’ll look at choosing yarn. I’ll give you a hint: it’s by Red Heart, it’s economical, and it’s hard-wearing.

Go to part 2: Sampling a flag with Super Saver yarn

Do you have a free German anything knit pattern? Flag, bier cozy,…

3 differences between knitting yarn and crochet...

How to knit with self-striping yarn