The pattern I chose to go over with you using Soft yarn by Red Heart is the Two-Pointed Hat pattern. I think this pattern has an interesting shape and there’s space to play with the techniques if you wanted to color outside the lines a little bit. It’s also a quick hat to make for kids, and because of that, can be knit up in several colors for their several outfits. 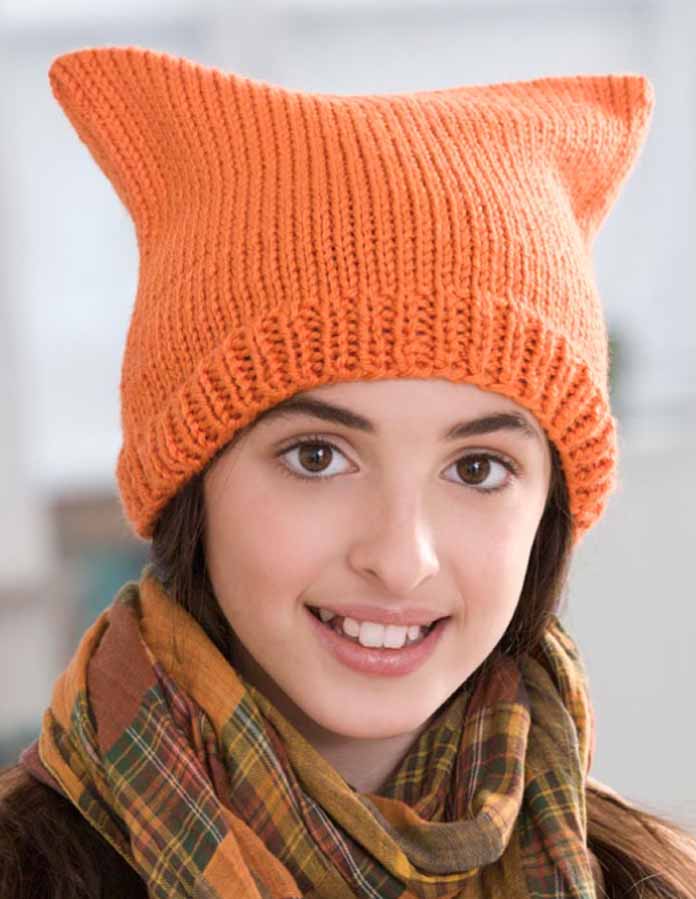 Red Heart’s Two-Pointed Hat. Click through for the free pattern.

I’m going to go over the Two-Pointed Hat pattern instructions first, because I had to read it a couple times in order to understand what was happening. The instructions are clear, but I was starting from a point where I thought I knew how it was going to be knit. I was completely wrong and couldn’t get out of that head-space to understand what the instructions were actually telling me! This hat is knit flat and folded in half. You’re knitting the brim, then stockinette up and over the head and knit the second half of the brim on the other end or side. Then simply seam up the sides. The fold line is at the top of the hat. 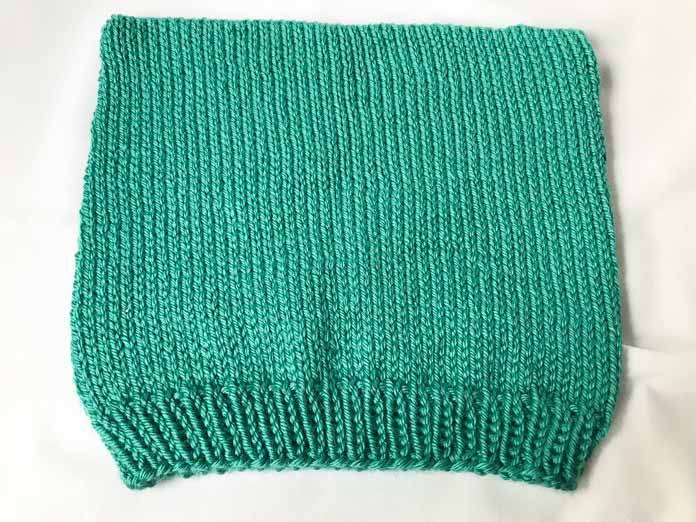 The completed version of the Two-Pointed Hat laying flat.

If you’re like me and want to avoid seaming at all costs, you can knit it in the round. The amount of stitches called for is half the circumference of the head, so ensure to double the amount of stitches you’re casting on. After casting on, immediately join into the round and follow the instructions from there. The hat says to knit until it’s 13½” (15½”, 17½”) from the cast on, then work the 1½” brim. In total the hat, when knit flat, would be 16” (18”, 20”) long. You don’t want to knit it that long because we’re not folding it in half anymore. You’re going to knit up until the half point, so knit until your hat in the round reaches 8” (9”, 10”). 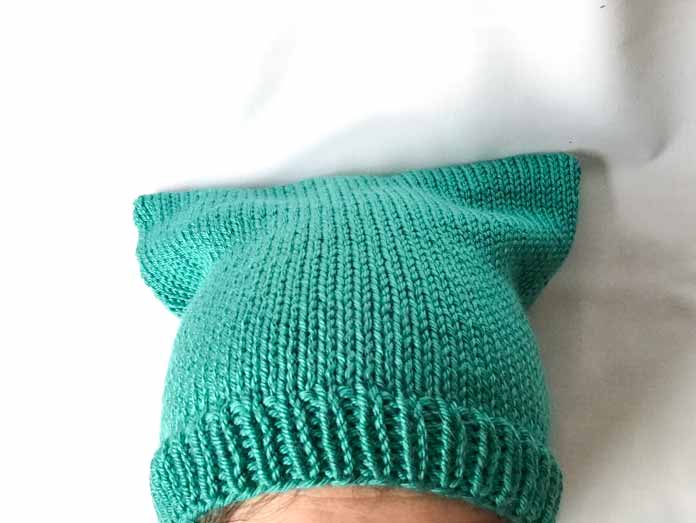 The Two-Pointed Hat in the color Deep Sea

I know the pattern says to seam the sides and if you’re following along at home, you’re likely going to realize there’s an open top that needs to be closed. I’m not going back to seaming though! I have a passionate love of the Kitchener stitch, so don’t bind off the top when you get there. Simply split your stitches onto two needles or two halves of a circular needle. Then Kitchener stitch that bad boy up! The top of the hat is going to be closed and you’re two points will be in place! 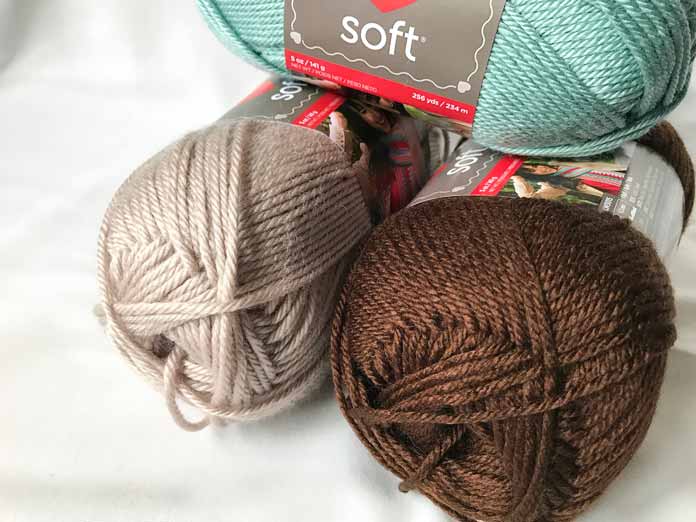 If Deep Sea is too dark for your tastes, check out Sea Foam (top). The other two colors Biscuit and Chocolate.

This is the perfect opportunity to bring up ‘reading your knitting’. When I cast this project on, I didn’t realize I was supposed to be folding it from the top down, I thought I was folding it side to side. Looking at the amount of stitches I cast on, I knew it was going to be way too small. Even the adult size looked like it might be a newborn size, if I were lucky. I doubled the stitches because I guesstimated that would be around the right size. Only after I was almost done the hat did I realize I did need to double the stitches. I was wrong about doubling the stitches. By looking at my knitting (or reading it) I was able to determine that I had a problem early on in this project.

While you’re knitting, don’t just blindly follow the instructions, read instructions all the way through before starting the cast on. Use your judgement and avoid continuing to knit a garment that you may have to rip out later! 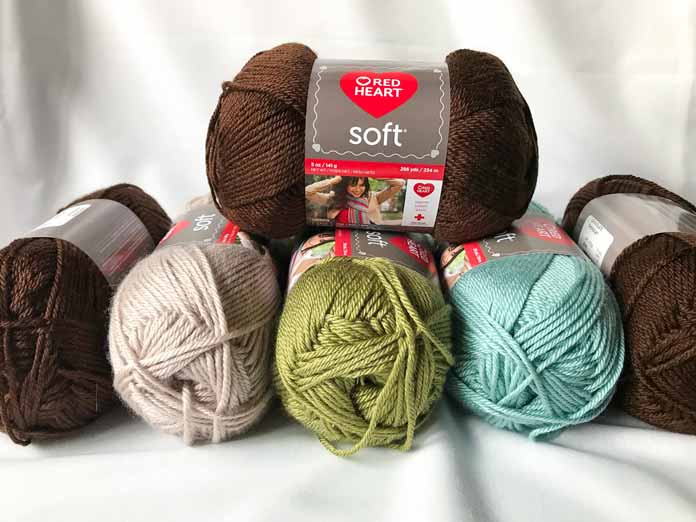 Soft is the perfect yarn to play around with stitch patterns and try new techniques!

I’m a big fan of trusting your intuition while knitting. If you’re looking at a garment and thinking it looks much too large or small, then it very well may be. Take another look at your pattern, your gauge, your yarn. Make sure nothing has changed and your math is correct.

In this case, try one hat in the round and one knit flat, let me know which one you like more!

Soft yarn is an excellent yarn for knitting just about everything for its softness and sheen, but particularly for hats, which are worn on our heads. Stitch definition is excellent, so using even the most complex stitch patterns is recommended.

This is part 2 of 2 in this series.
Go back to part 1: The qualities and benefits of knitting with Red Heart Soft yarn

The qualities and benefits of knitting with Red Heart Soft yarn

Knitting with Major by Universal Yarn

The Right Job for the Right Yarn