This week I’ll be knitting with Prose Sock Yarn. It’s a superwash wool yarn that is produced by Wisdom Yarns. 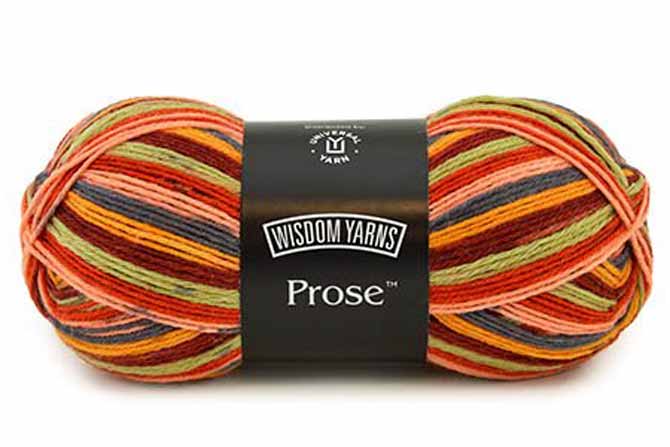 Below, you can see the “Foxy” colorway. I really like the blend of warm grays and taupe with the bright stripe of a warm, foxy orange. Prose Sock Yarn is wound in these oblong skeins, but they aren’t official pull-skeins. On my first skein, I had no problem finding the end on the inside so I could pull it out, but with the other one, about ¼ of the yarn came out in a lump, which untangled easily. 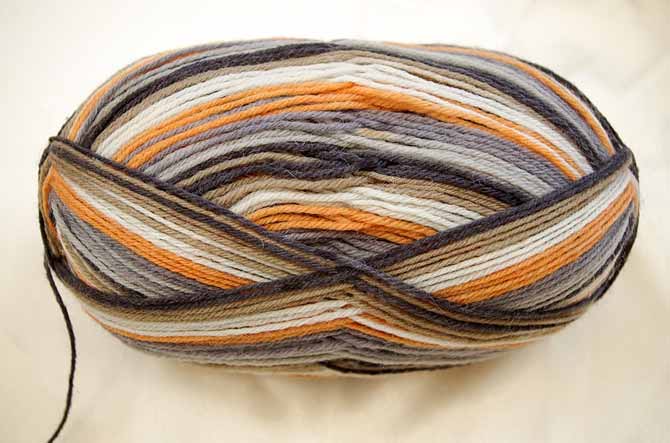 Start knitting now to wear “Foxy” socks with your back-to-school or fall outfits! It’s also perfect to wear with your khaki’s.

There are a generous 459 yards in each 100g skein, enough to make a pair of men’s socks, not to cover an entire men’s calf, but not an anklet sock either. It comes in 6 colorways (scroll down on the linked paged), and while I know that some guys only wear grey, black, navy and brown socks, my sons and I would happily wear socks in any of these colors. I’m sure that women would like all the colors, too.

I just read the above and see that I’ve used the word “skein” a couple of times, and this reminds me of 2 recent discussions I’ve had with friends at my knit-night group. First, when is a ball of yarn a skein, and second, is it pronounced skeen or skayne. So I’ve done a little research. Lisa Shroyer, the editor of Interweave Knits magazine has illustrated and described a comprehensive list of different “put-ups” of yarn and what they’re called and I thought I would share it with you here. 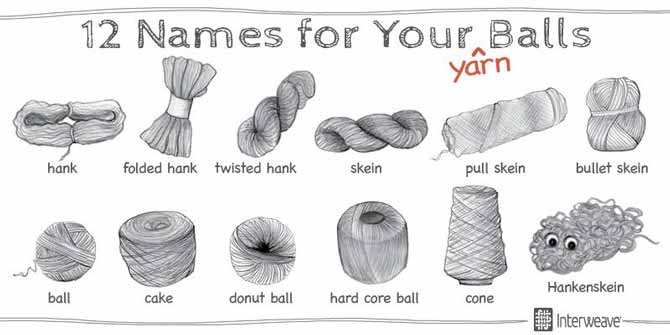 So in fact,  Prose Sock Yarn is a bullet skein.

As far as how to say “skein”. The way it is pronounced varies by geographic region. Why a given pronunciation was adopted by different regions is of course a topic that a linguist may enjoy pursuing, but we won’t go into that. For example, why do the British say petrol, but in North America we say gasoline or gas? Why do Canadians and some folks from northern states say “pop” while east and west coast people say “soda” and in the south it’s called “coke,” even if you’re drinking a lemon flavored soft drink? Here’s a link to a linguistic map of soft drink names. Language does vary from region to region…but let’s look at skein.

Do you remember this poem?

that means that  skein pronounced as /skayne/ not /skeen/

Regional differences aside, I haven’t met an English speaker from anywhere that says “welcome to our kneeborhood” or “how much does that bag of potatoes wee?” So I’m going to say it’s safe to say that “skayne” for skein is the more accurate way of saying it. 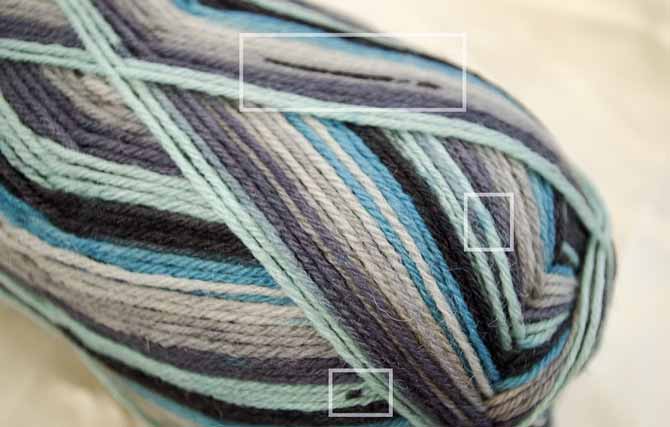 Need a more subdued colorway to go with corporate or tech-colors in your wardrobe? Use the “Menswear” colorway of Prose sock yarn to fill that void and still have a stylish sock collection. The boxes inserted after the photo was taken highlight “mistakes” that produce intentional flecks in the yarn.

Now that we’ve settled that, I’ll tell you more about Prose sock yarn. You can see I’ve highlighted some specks of different colors that appear within the stripes. Some of the colorways have more of these tweedy spots than others. These “irregularities” give the appearance that this yarn is dyed by hand, rather than on a painting machine. Don’t think that there’s a problem with your skein — it’s only part of the dye job. 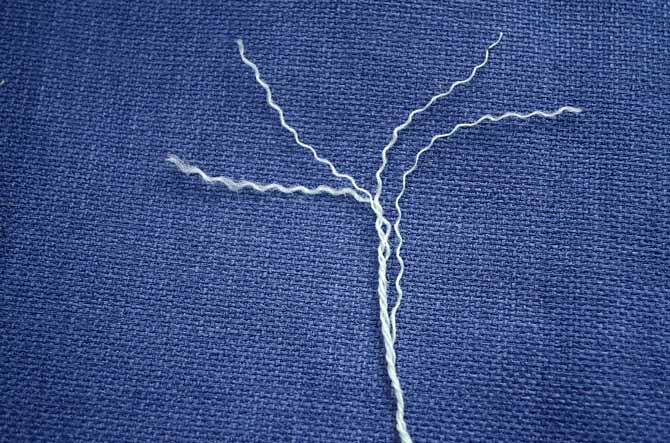 Prose is a sturdy workhorse — a 4-ply sock yarn spun out of superwash wool and nylon.

Prose sock yarn is made of 75% superwash wool and 25% nylon and is a 4-ply sock weight. It can be worked on your preferred size of sock needles or you can play around with it to get the gauge you want. For a project I’ll share with you a little further on in the week, I actually knit it with US 6 [4mm] needles. Here’s what the swatch looks like: 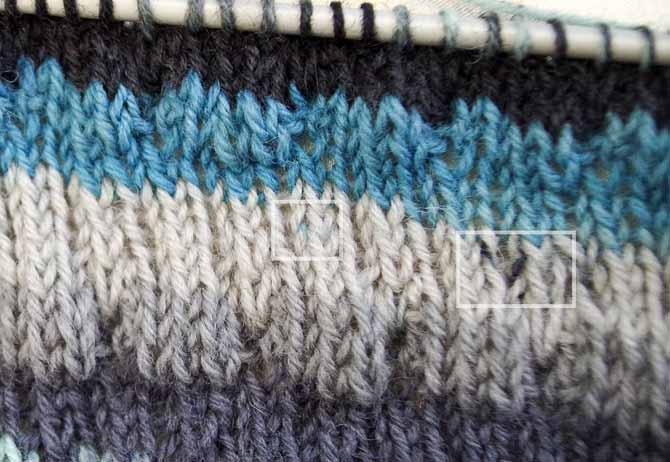 Mystery swatch! Come back to see what I’ll do with this cool mix of twisted and not so twisted stitches.

Knit a shawlette with non-allergenic yarn

Scrap yarn challenge – can she do...