Mittens and fingerless mitts from Finn

As our exploration of Finn comes to a close, I plan to expand on our theme from yesterday’s post where I laid out the pattern for a pair of Fair Isle gloves.

Finn is a great choice for hand coverings. Its fiber content has 50% acrylic, which makes it washable, 25% merino, which gives the gloves memory, and 25% alpaca, which adds softness and luxury.

Along the way, I’ve discovered the great mileage one gets from Finn. I made three Fair Isle samples and a pair of gloves from one ball of Jam and had enough left over to do the all the purple in both of today’s mitts!

Today, I’ll take yesterday’s glove pattern and convert it into mittens and fingerless mitts. Let’s start with the latter, as it’s an easy conversion. 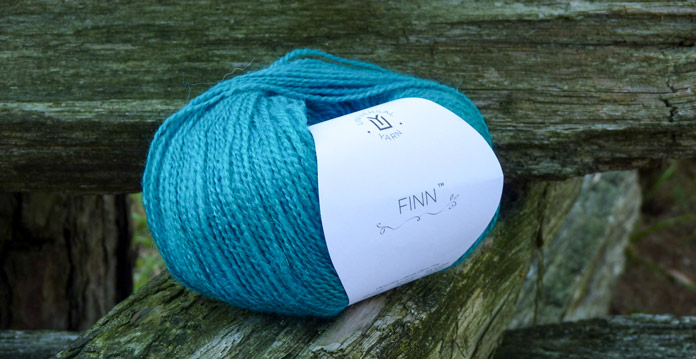 For our mittens, we used Rainforest as our main color.

For fingerless mitts, work each piece according to the instructions given for the glove in my last post up to the top of the chart. K 1 round A, then work another round, decreasing 6 sts evenly around (54 sts).

Pick up sts as given for glove. (scroll down and use the directions for the mittens below, as they are identical to the ones for the gloves.) 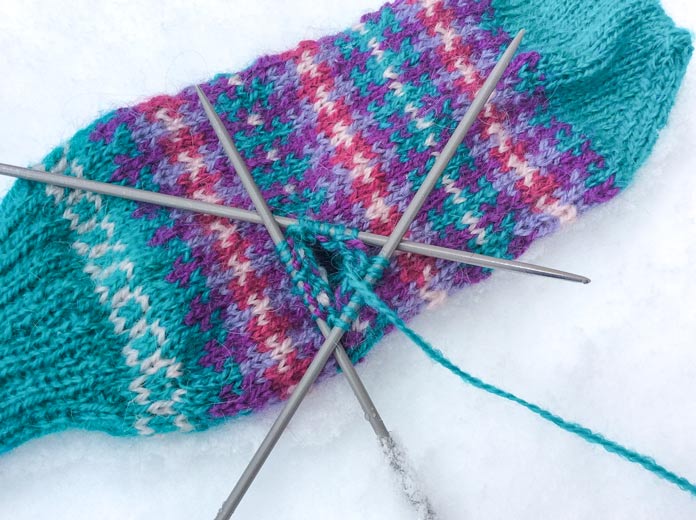 Thumb stitches picked up and ready to knit

To make our mittens, I decided to shake up the colorway and use Rainforest as the main color. I also changed the motif coloring just slightly on the back of the hand. These “tweaks” show you even more ways to be creative with Finn.

For the mittens, I also changed the notation of the pattern and the charts to show a different style of pattern writing. This style, with multiple charts and assumptions that the knitter has a fair bit of knowledge about both knitting and the construction of mittens, is similar to what you might encounter in a magazine.

Making a knitter refer to two graphs on the same round isn’t my favorite way of writing a pattern, but it is one you’re apt to come across. This project is an easy way of learning to deal with them.

I’ve copied over all the instructions from yesterday’s post that relate to both the gloves and the mittens here, so you mitten knittin’ kittens can have everything in one place.

Before I continue with the pattern, I want to offer a few words of summary of my work with Finn.

Knitters sometimes talk about yarn in a humanistic manner. One of the things we say is, “It hasn’t told me yet what it wants to be.” Finn spoke to me before I ever held a ball of it in my hand. Even better, that “instant plan” that formed in my mind materialized in several incarnations: gloves, mittens, and fingerless gloves.

The mileage I got from about 40 dollars’ worth of Finn was exceptional. In addition to three sizable samples, a pair of gloves and a pair of mittens, I estimate that I have at least enough yarn left over from 5 balls of yarn to make two more pairs of hand coverings – or maybe a hat to match the mittens or gloves. The hours of knitting entertainment Finn offers for the money is a very efficient use of a knitter’s dollar.

This has been a good week of knitting, indeed. 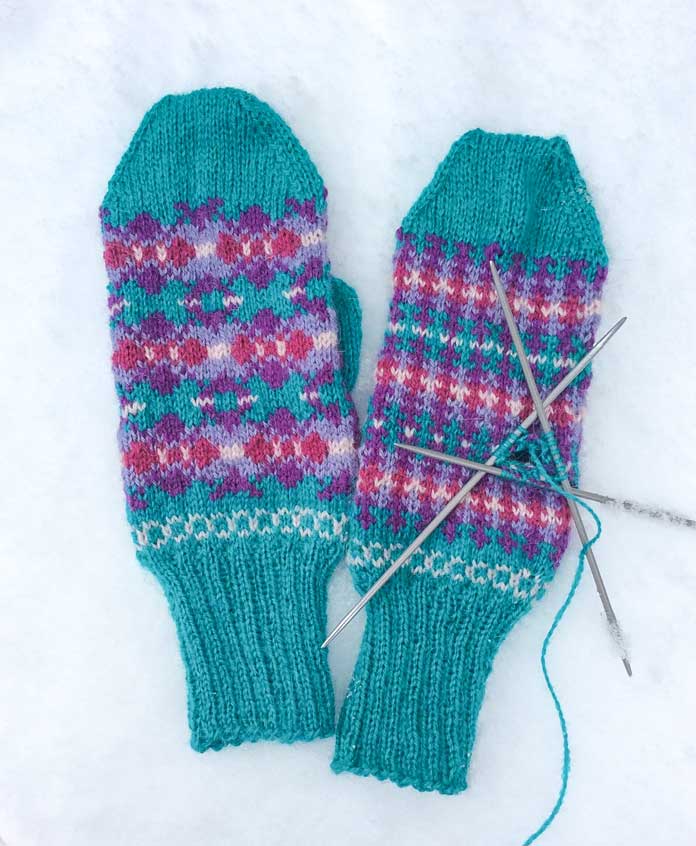 Almost done! As soon as I finish the thumb on the right mitten, I’ll be ready for the snow beneath this handsome pair!

Notes
1. Use chart A for the back of the hand and chart B for the palm. For the left mitten, work the palm chart first, followed by the back of the hand chart. For the right mitten, do the opposite.
2. Refer to the written instructions at rows 16 and 17 of the charts for placement of the thumb opening.
3. If you are not comfortable with grafting the top of the hand opening, replace that instruction with “cast off all sts, work thumb, then turn the piece inside out and sew the opening closed.”
4. Sections that are not identified “left” or “right” apply to both mittens.]

Bracelet
With A and E, work Bracelet Chart. 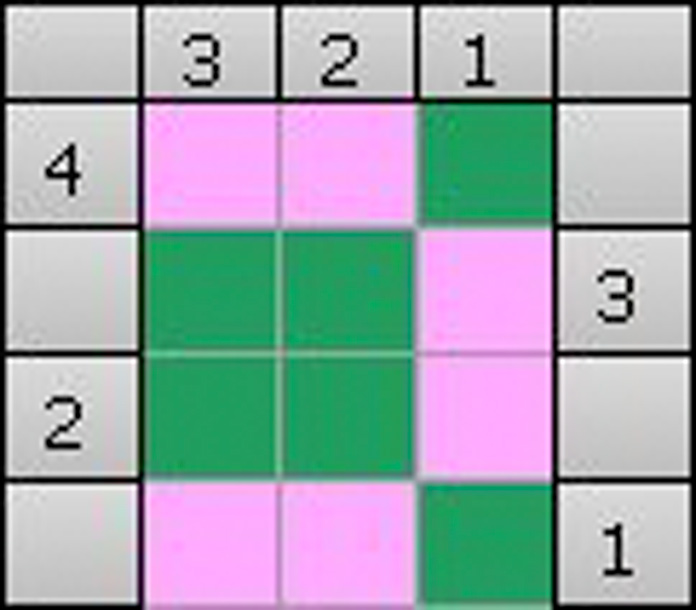 Work palm chart for 33 sts, pm, then work 2 repeats of row 1 of the back of hand chart (between the black vertical lines), then work the last stitch of the chart.

Continue through round 15 of the charts. 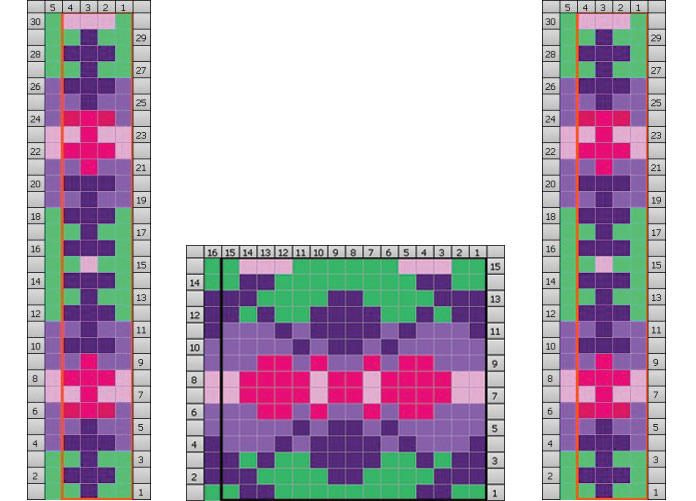 Continue working in rounds. On the third repeat, stop after round 14. Break B.

With A, knit even in rounds until mitten is 1½” [4cm] less than the desired length. Slip one st from the back of the hand to the palm of the hand to make an even number of sts for each.

Continue decreasing in this way until the following round:
*K1, ssk, 8, k2tog, k1; rep from *. (24 sts)
Break yarn and graft opening closed.

Work back of hand chart for 33 sts, then work palm chart for rem sts.

Continue through round 15 of the charts.

Refer to ”continue working in rounds,” above, to complete the right mitten.

Finishing: Turn mittens inside out and weave in all ends. Wash, dry, and enjoy. 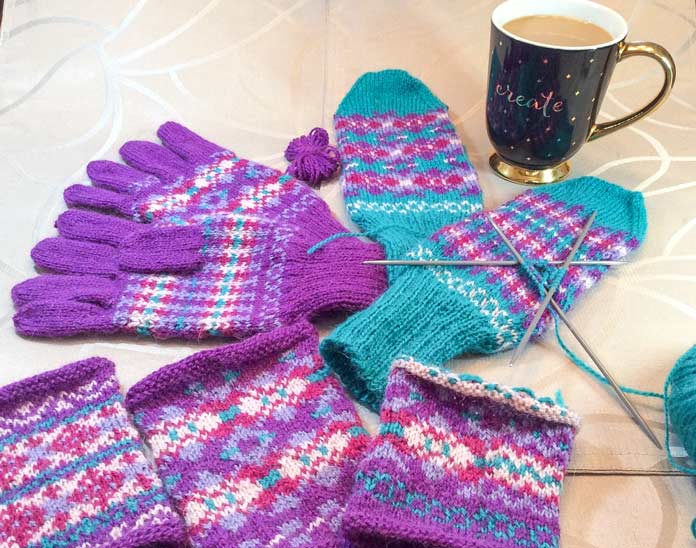 All my knitted results for my week of knitting with Finn – remember, this photo shows the full ball of purple I used – the butterfly is the leftover! Now, I’ll finish knitting the thumb while I drink that coffee from my “Create” mug. Create, indeed!

This is part 5 of 5 in this series.
Go back to part 4:  Fair Isle gloves made of Finn yarn

Knitting with Major by Universal Yarn