The challenge of combining 7 different colors on a knitted sweater

This week, I’m knitting with Universal Yarn Odette which is a light blend of fine superwash merino and alpaca, combined with the strength of nylon. Its open and airy chain construction exudes a heathered and feathery halo that is perfect for a multitude of projects. 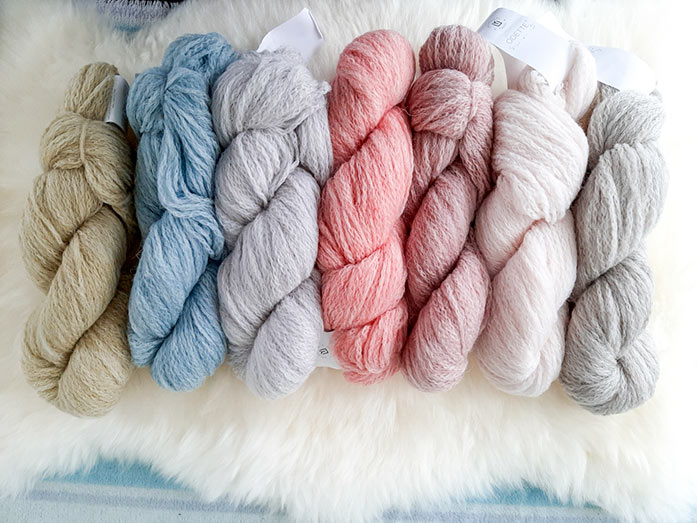 Today, I’m knitting the Olympia Pullover which is a stranded sweater that calls for seven different colors. When I first saw this free sweater pattern designed by Melissa Leapman, who is one of my favorite designers, I just had to make it. You can download the free Olympia Pullover pattern here. 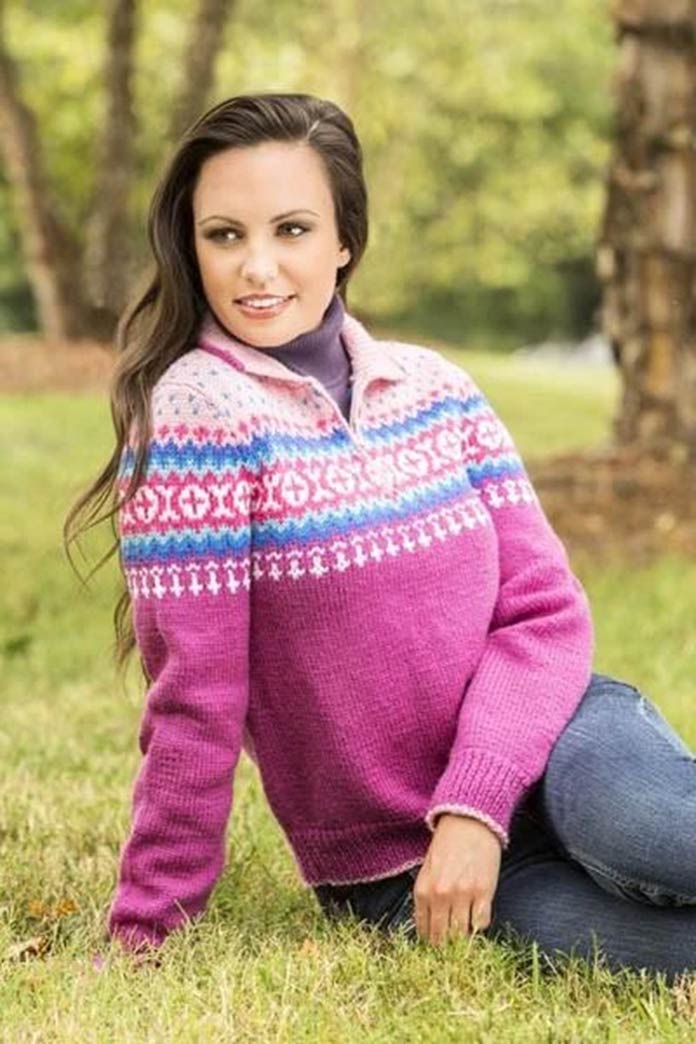 Olympia Pullover is a free pattern designed by Melissa Leapman.

Even though this pattern was designed for a different yarn, the gauge of 22sts over 4” [10cm] was the same that I was able to achieve yesterday with Odette. The row gauge is quite different, but for the most part, that should be okay since most instructions say to work to x” before shaping. Where I will likely need adjustments is in the sleeve cap as row gauge may come into play.

This project presented a few challenges; the first being the colors. When I selected the colors from online samples, I had a plan in mind. When I received the yarn, the colors presented very differently. For example, Rose Villa looked to be very “peachy”, but in reality, it’s an off-white with peach undertones. It’s beautiful but changed my thinking when I started putting colors together. 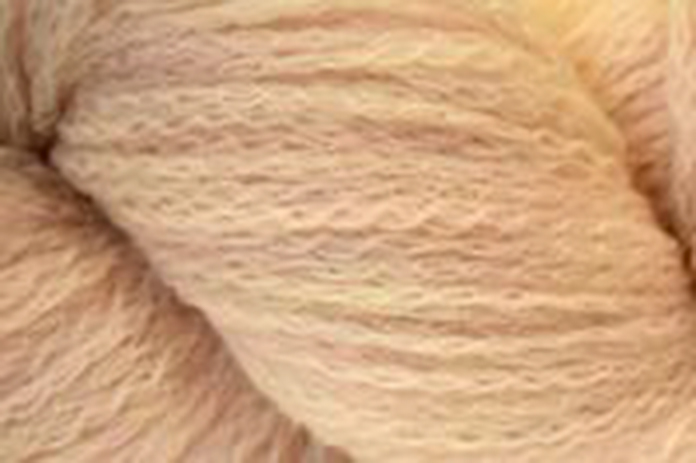 I have to admit, that the color sequence was my biggest challenge and caused the most angst. I second-guessed myself several times. If you recall in my first post this week when I mentioned that the color intensity changed when the skein was unraveled, I decided to do the same. I unraveled the seven colors and hung them up on pegs outside in the natural light. This helped me to finally decide on the sequence I would use, which ended up being very close to my original thoughts. Notice the 3rd color from the left; that’s Rose Villa in natural light. 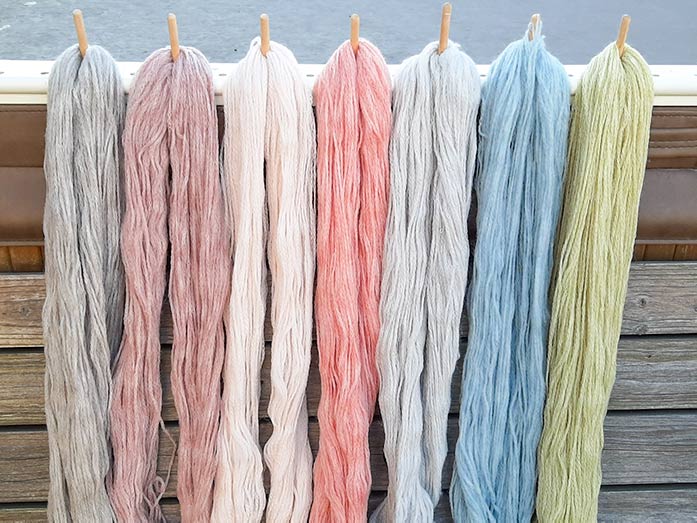 Now that I finally decided on my color sequence, I started in detail with the pattern only to notice that there was some key information missing. The gauge stated 22sts x 26 rows = 4” in St st using smaller needles, however, it only called for US 7[4.5mm] needles. I made an assumption that the smaller needle meant US 6[4.0mm] but wanted confirmation. I sent a note to Melissa Leapman via Ravelry and she responded within minutes to confirm my assumption. I was very impressed that she responded so quickly. I’ve written to designers previously and had both good and not so good results. Some never get back to you while some others have sent a stock reply that didn’t answer my question. Thank you, Melissa for backing your designs. Take note however, the pattern link provided above does not have the typo corrected.

My second challenge was the sizing. The Medium finished measurement was 37 ½”, and the Large 41 ¾”. Normally, I would make a Medium, but I wanted a little more ease than what the Medium offered, however, the Large had too much ease for my liking. If this was a fairly plain sweater, I would add a few stitches when casting on to give the finished measurement that I wanted, however, due to the colorwork involved, I had no desire to try and re-design it. The difference in sizes is 12sts, so I decided to knit the Large using a smaller needle making a tighter gauge, which should result in a finished measurement around 39”. Perfect.

Off I go knitting the back of the sweater with my choice of colors and needle size. Everything is working out fine until I come to the armhole shaping. It’s a little confusing in how it describes to bind off x sts on each side. That line is in the pattern twice, so I wasn’t sure if that was a typo or if it meant to do it twice. Based on the stitch count, I assumed twice but again, wanted confirmation as the sleeves only asked for the bind off once. Normally, I would expect them to be the same. Melissa responded to my query right away confirming that it should be done twice on the body.

Now I’m into the colorwork section, which is a lot of fun to do. When it came time for the larger motif, I counted in the number of decreases to mark my starting point. Only I didn’t really mark it; I just put a ruler marking the spot, and proceeded to knit. Well, my ruler shifted on me and when I stopped to admire my work a few rows in, I was dismayed. No motif, just a mess. Back I went, recounted where I should be starting and marked it with a pen. Much better results. I’m not a colorwork specialist, but have knitting friends that do intricate colorwork on a regular basis. During one of our many Zoom calls, I presented my approach to one of these experts and she confirmed that I was doing the right thing. It pays to ask an expert. It also pays to admire your work often so that mistakes are caught early. 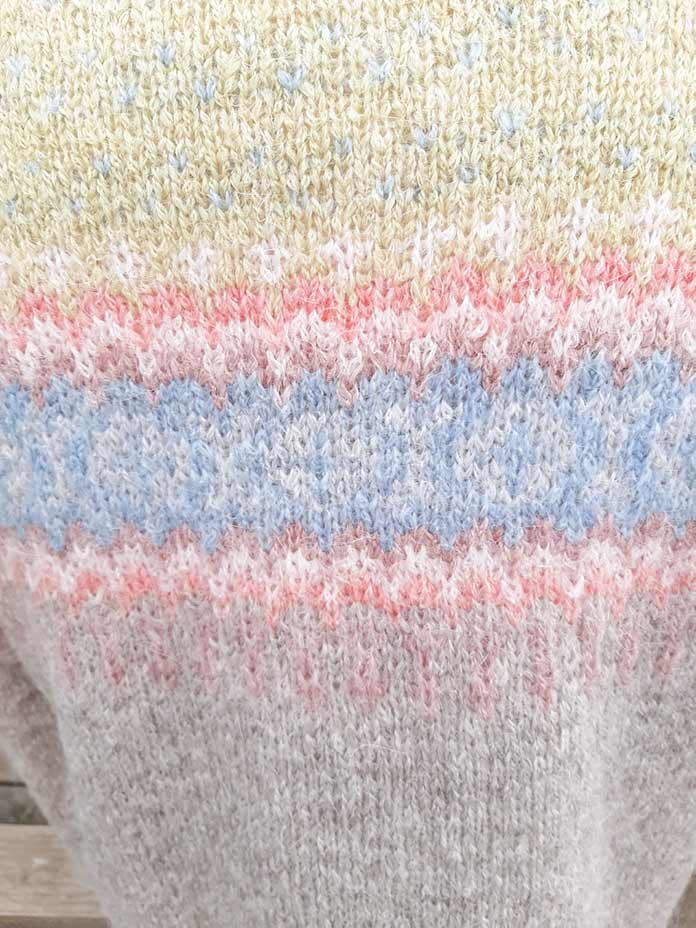 The colorwork section of the Olympia Pullover with the 7 colors of Odette.

The colorwork section turned out beautifully. I wasn’t sure if the muted colors would show up very well, but they do and I’m pleased.

I’ve stated before that I prefer doing top down sweaters as it’s much easier to size it appropriately, especially in the sleeve length. You try it on and stop knitting when it’s the desired length. Not so with bottom up and knit in pieces. The pattern calls for the sleeve being 18 ½” for all sizes before shaping the sleeve cap. Well, I don’t believe everyone has the same arm length so I measured another sweater of mine and based it on that. Glad I did. I have long arms for my height, but not that long.

As mentioned earlier, I anticipated making adjustments to the sleeve caps due to the difference in row gauge. I originally calculated to decrease every other row instead of every row. It turns out that I miscalculated a wee bit and ended up with sleeve caps that were too big for the armhole opening of the body. I was also having a difficult time matching up the colorwork when seaming due to the difference in the bind off twice in the body and once on the sleeves. I ended up taking the caps back to the start of the decreases, binding off twice to be the same as the body, and switched to decreasing every row when I got down to 37 sts. It worked. The pattern lined up and the sleeve cap was the right size for the armhole.

Now for the finishing. My area is still in lockdown, which means I can’t go to a store to select the right zipper for the front opening. I’m very particular about matching the zipper color to my work, so online shopping was not an option. I decided to do a slip stitch edge around the opening with the intent to finish it off later. As it turns out, I like it the way it is, so I may not do the zipper after all. 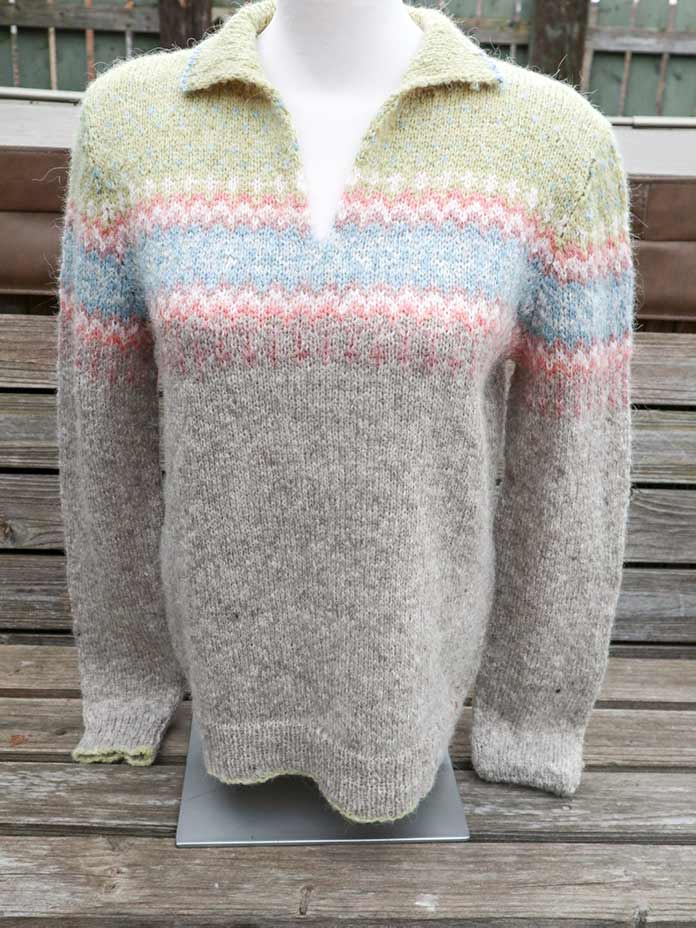 The Olympia Pullover is complete and I love the heathered colors together. It’s very light and comfortable to wear. It ended up being about 38¾”, just shy of the original plan to end up with 39”. So I’m calling this a success. There is a downside to using seven colors; weaving in all the ends! I foresee doing those during Zoom calls over the next few days. And there’s a lot of leftover yarn, but no worries; I’ll put it to good use on Post 5 this week.

I hope you picked up a few tips today and that you’ll join me tomorrow when I take Odette in a totally different direction. I’ll be making a pair of socks to match my new sweater, which will illustrate the chameleon qualities of this lovely, soft yarn.

Go back to part 2: Various swatches disclose the chameleon qualities of Odette yarn

Go to part 4: The strength and beauty of Odette make a perfect pair of socks

The Braid Stitch adds texture to a...

Knitting for the home with Uptown Worsted