“In the knitting world where grey and beige plain sweaters seem to rule, how extraordinary to find this energetic man knitting such detailed and intricate color. I applaud his moxie!” – Kaffe Fassett, Textile Artist

“The Knitting Pilgrim is astounding and the opportunity to engage with it and Kirk’s amazing story-telling talent is a much-needed balm for our age, for any age.” – Peter Smith, Project&Creative Director, Canadian Centre for Rural Creativity 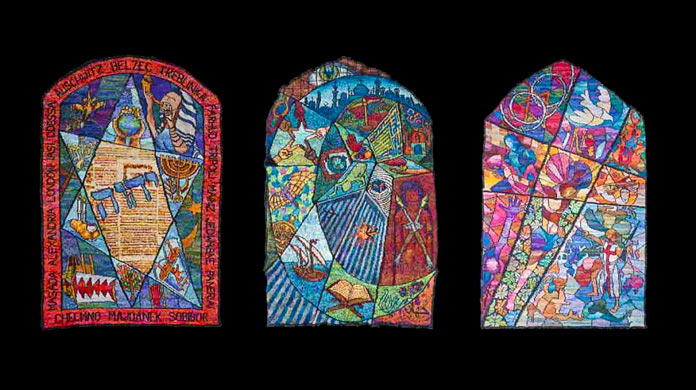 A unique play that explores empathy and understanding – with knitting  –
Opens at the Aga Khan Museum Auditorium May 11-12, 2019 and tours Ontario until Nov, 2019

Toronto, ON (April 11, 2019) Directed by Jennifer Tarver and performed by actor, writer, and knitter Kirk Dunn, The Knitting Pilgrim is a multidisciplinary one-person theatrical experience that uses storytelling, image projection and a one-of-a-kind textile installation called Stitched Glass. The show, which premieres at the Aga Khan Museum’s Auditorium for 3 performances May 11 and 12, 2019, and then tours for 39 more shows around Ontario, tells a story of a journey that you need to experience.

Created by actor, writer and knitter Kirk Dunn, Stitched Glass is a triptych of large hand-knitted tapestries, designed in the style of stained-glass windows, which looks at the commonalities and conflicts among the Abrahamic faiths: Judaism, Christianity, and Islam. The textile masterwork was supported by a Chalmers Foundation grant through the Ontario Arts Council in 2003 and took Kirk 15 years to complete. There is no other knitting project like it in the world.

Kirk and seasoned writer Claire Ross Dunn co-wrote The Knitting Pilgrim, which uses the Stitched Glass tapestries – over 90 pounds of knitting – as its set. The play recounts Kirk’s artistic and spiritual journey of hand-knitting the giant project, and his hope to contribute to the vital conversation about xenophobia, dealing with internal and external strife, and fear of the other.

“The hope behind Stitched Glass has always been to create conversation,” says Kirk, who sought out Christian, Muslim, and Jewish consultants to help him research and design the artwork and, more personally, to learn about the feelings and experiences of others. “A conversation between all people – believers and non-believers – who find themselves in conflict. How can we better understand and empathize with each other? Everyone has a unique background, point of view, and experience, and at the same time, many experiences are universal. Focusing on what knits us together, rather than what pulls us apart, is a place to start.”

Kirk Dunn’s stage credits include Billy Bishop Goes to War (Ergo Arts Theatre, Carousel); Merlin and The Complete Works of William Shakespeare (Abridged) (YPT); Dads! The Musical (Charlottetown, Stirling, Drayton); Romeo and Juliet (Ford Centre); More Munsch (The Grand); The War Show, A Flea in Her Ear, Don’t Dress for Dinner, and The Affections of May (Drayton). Kirk has been knitting since 1988 and designing since 1995. In 1998, he apprenticed with Kaffe Fassett in England and has since been covered Vogue Knitting, Family Circle Knitting, Maclean’s Magazine, the National Post and CBC Radio. Award-winning filmmakers Ian Daffern and Omar Majeed are making a documentary about Kirk and his work.

Director Jennifer Tarver,most recently Artistic Director of Necessary Angel Theater Company between 2013 and 2019, has directed for Soulpepper Theater, The Tarragon Theater, Canadian Stage Company, Nightwood Theater, and the Stratford Shakespeare Festival. During five seasons at Stratford, her work included Waiting For Godot, The Homecoming, Krapp’s Last Tape, Zastrozzi and King of Thieves. Jennifer’s recent work in the US includes Krapp’s Last Tape in Chicago and Hedda Gabler in Connecticut.Jennifer was also Associate Director at The Theater Centre in Toronto from 2004-2012.

The Knitting Pilgrimwas work-shopped by Ergo Arts Theater in 2018. Established in 1992 by Artistic Director Anna Pappas, Ergo Arts Theater strives to promote creative thought, innovative expression and empathy through the performing arts. Its goal is to make the art of theater accessible to all – to be a part of collective artistic experience that enhances the way people think, live and communicate.

In Toronto, the play will be seen at the Aga Khan Museum’s Auditorium for 3 performances, May 11-12, 2019, and then tour Ontario, with stops at The Toronto, Ottawa and Hamilton Fringe Festivals, and other venues as well. Knitting is encouraged during the show if audience members are so inclined.

Kirk is also offering “Knit Together” workshops on the tour, using original designs to share his unique knitting style of ‘painting on the needle’ and ‘improv knitting’ with learners. 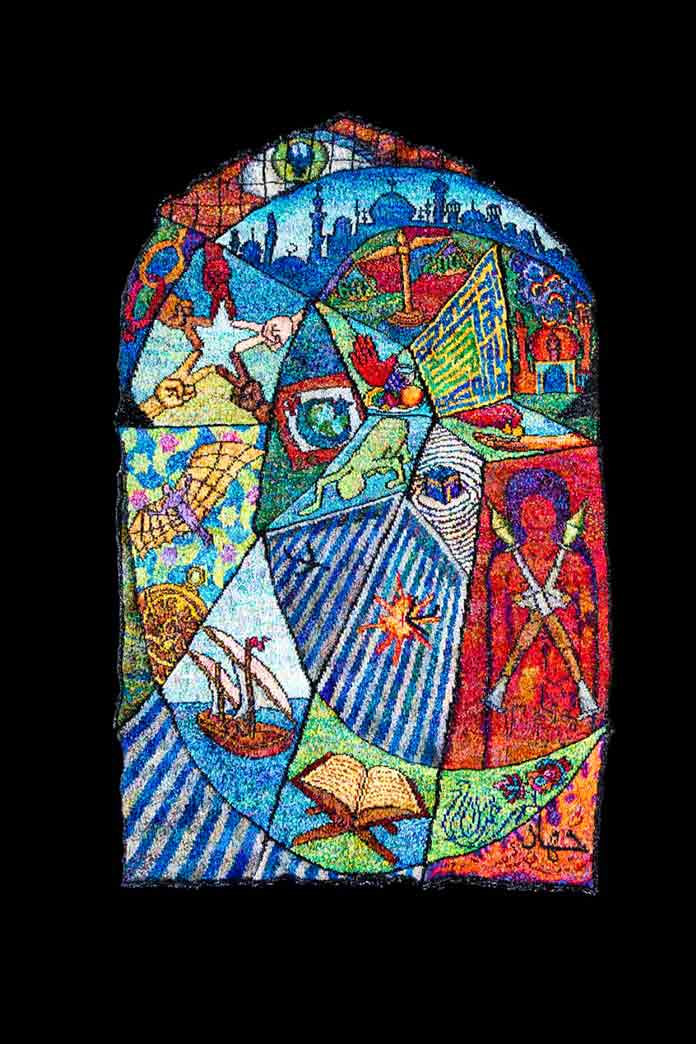 Print this page or save as a PDF
knitting
FacebookTwitterPinterestLinkedinRedditWhatsappTelegramEmail

Carla A. Canonico is the Publisher and Editor-in-Chief of A Needle Pulling Thread Magazine, QUILTsocial.com, and KNITmuch.com.

Knitting to Stay Sane | Challenging myself,...