There’s a lot of ground to cover in this series of posts! For the next five days, I’ll be reviewing FIVE premium Red Heart yarns. We begin with Chic Sheep, a soft, pure merino wool yarn created by knitting designer Marly Bird. 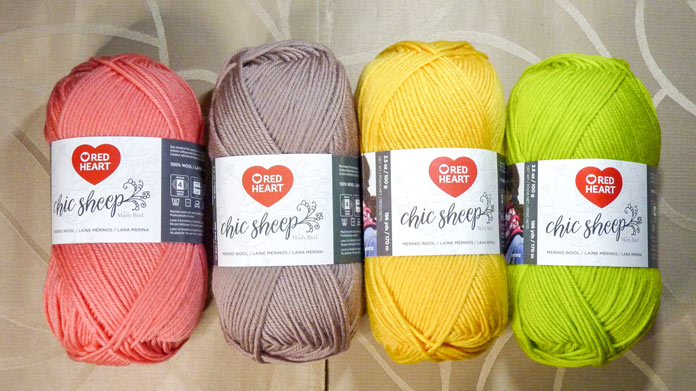 It was so nice to come across Chic Sheep and the other yarns Marly has created for Red Heart and see how well she’s doing.

Chic Sheep is an Aran weight yarn – some call it a “4” but that numbering system has never been very relevant to me because knitting worsted and Aran weight yarns are classed as “4.” I prefer to “gauge” my yarn (get it?) by the recommended gauge and needles displayed on the ball band. In almost every case, this bit of information tells a better story. 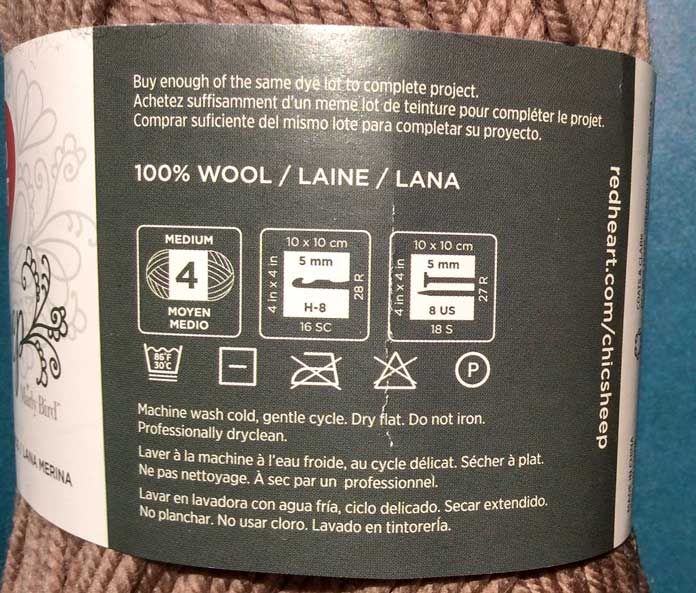 I have to move on because this is the only post about Chic Sheep for this week, but I do have to say a few words about gauge before I talk about one of my favorite things – COLOR!

Ordinarily, I get very close to gauge with any new yarn I try, but Chic Sheep challenged me. With size 8 [5mm] needles, I got 20.5 sts to 4″ [10cm]. That’s worsted weight! Going up to size 9 [5.5mm] needles gave me 19 sts to the same span, right between the two weights of yarn. So I really recommend doing a gauge swatch the first time or two you work with this yarn. Chic Sheep is pure wool, and wool has a lot of elasticity, which may have contributed to my tensioning issues. Because it is wool, it will respond well to blocking, so if your gauge leaves your piece a little smaller than you need, you can block them to size. With no effort at all, I was able to get my 7½” [18.5cm] sample blocked out to a full 8″ [20cm] square. 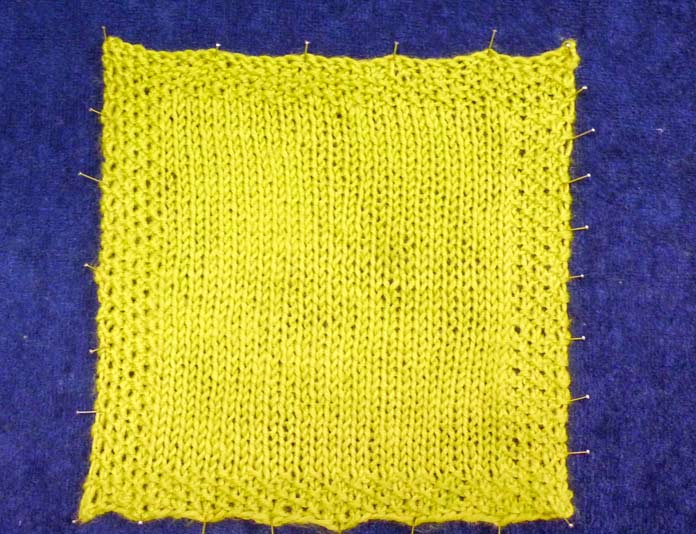 Blocking isn’t as difficult as it sounds. Dampen the piece or pieces, squeeze out excess moisture gently by rolling it in a towel, then pin it out to measurements on another towel. Be sure to use rustproof pins!

Now. As I mentioned, Chic Sheep comes in 24 colors, and it has pattern support of 42 knit and crochet designs. I wanted to do a child’s sweater, but none of these patterns include one for a child! So, I did a “pattern crawl” on the Red Heart website, and found just what I was looking for: the Jolly Kids’ Sweaters!

Yarn shop owners often tell me that people only want to make garments in either the colors shown in the photograph on the pattern or the colors in which the store sample was made. I chose the bright, cheery colors of Mai Tai, Mimosa, and Green Tea, and also Suede, in case I wanted to do a slightly toned-down version. Most of these names are a little grown-up for kids, but we don’t have to explain what they mean, do we? As you can see, the Jolly Kids’ Sweaters are done in Christmas colors. I’m about to turn that on its ear!

The Jolly Kids’ Sweaters were originally designed in Christmas red and green, as you can clearly see!

There was a host of mix-ups when I started to knit – all my fault. Between my gauge issues and not paying enough attention to the needles to use, I more or less miniaturized this pattern instead of downsizing it. No matter – the good thing about a child’s sweater is that it will fit them at some point!

Regardless, you’re about to see how much you can shake up a pattern just by changing the colors!

I DID tweak the pattern just a little – I wanted to bring the contrasting color down to the hem of the body and the cuffs of the sleeves. If you want to do this too, here’s how:

Cast on the stitches for the body part with Col C, and do this:

I assigned Mai Tai to the body for the front and back (Col A), Mimosa (yellow) for the sleeves (Col B), and Green Tea to the trim (Col C).

What a difference! By simply assigning different colors to a pattern for a Christmas sweater, I’ve created something fresh, and bright, and spring-like!

I. LOVE this. It’s fresh, it’s bright, and it will look great on any child!

If I wanted to tone this down, I would change out the Mai Tai for Suede for the body. For something more patriotic, I could go with the colors in the flag, and if I wanted to make a “princess unicorn sweater,” I would look for pink and purples – they’re all in the color range for Chic Sheep. 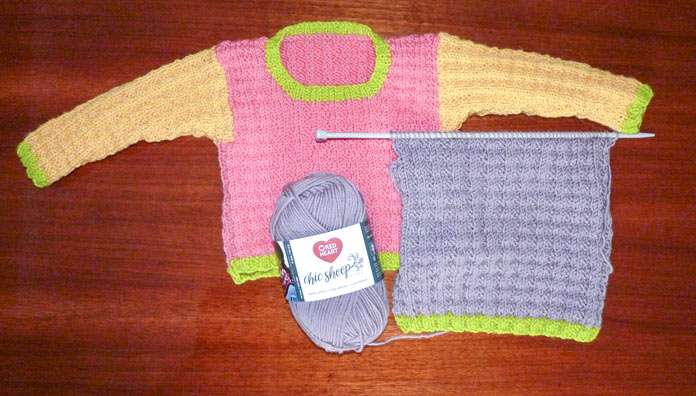 The sample on the lower right begins the same as our little sweater with Green Tea, but instead of using Mai Tai, I used Suede, which is still bright enough for a child, but also subdued enough to suit an adult version!

Oh, and a final word – I’ve worked on these samples in the presence of several knitters. The consensus – and final word – is soft. As a spinner, I know that merino yarn is naturally soft, but most knitters aren’t aware of just how soft it is. The softness of Chic Sheep is such that it’s great for children’s wear, with its “machine wash-delicate” and “dry flat” care recommendations.

Our time with Chic Sheep is over. As our ‘boppy’ children’s music fades, the notes from the love theme from the movie The Godfather swell, to set the mood for the rest of this week’s posts, which tell An Italian Story.

Go to part 2: Ora – An Italian Story in a bulky knit

From Chic Sheep to An Italian Story

Ora – An Italian Story in a bulky knit

I just saw this… thank YOU! – Carla

Hi Cynthia,
I noticed that you are quoting U.S. needle sizes with metric. Since this is a Canadian publication, why not use Canadian equivalents?
[email protected]

Thanks for your observation, Ruth. Metric needle sizes are “the Canadian way.” Canadian knitters began using metric needle sizing in the early 1980s. The previous needle sizing system in Canada was actually based on the British wire gauge measurements, and when Britain adopted the metric system, even they abandoned this means of measuring needles. By using millimeters, one can accurately see or visualize the diameter of the needle. There are drawbacks in the U.S. sizing system in that anything smaller than a 2mm is described with multiple zeroes, and that some of their needles do not have exact metric equivalents.

By offering these two ways of defining needle sizes, we are being inclusive to our readers around the world, including the U.S.A.

Knitting snowflakes into a hat