Today’s the day you can cast on for your Canadian flag. During our first week of having fun with flags, we traced out a maple leaf from a computer image of the flag, and yesterday, we did a sample knit of the chart.

From it, we made discoveries about how a chart made using pre-printed knitter’s graph sometimes requires adjustment when it is translated into knitting that has a different gauge.

Today, I present the final chart, and some rudimentary instructions so you can make your own symbol of your patriotism, and your craft!

Before I do, though, I want to make a couple of notes about the border: I chose moss stitch because I found in my last series of posts that moss stitch pulls in less than seed stitch and it complements stocking stitch well. I chose gold, because, when a Canadian flag is fringed, the fringe is usually gold in color.

Finally, for the keen observers, the first border row across the top of the flag is worked in gold, without the knits and purls over the red and white stitches. Why? Because it will make a smooth transition between the flag and the border. If I hadn’t planned for this, the first row of moss stitch would have gold stitches with red and white bumps showing on the front of the flag. 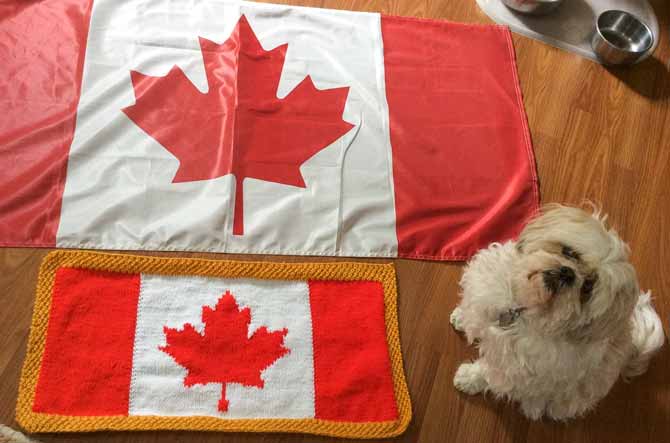 The knitted flag with a purchased flag to show that the width to height ratios are similar. While it looks like Zoey is “standing on guard for thee”, you will note that her food bowl is in the upper right corner; she is “standing” in wait of something else. 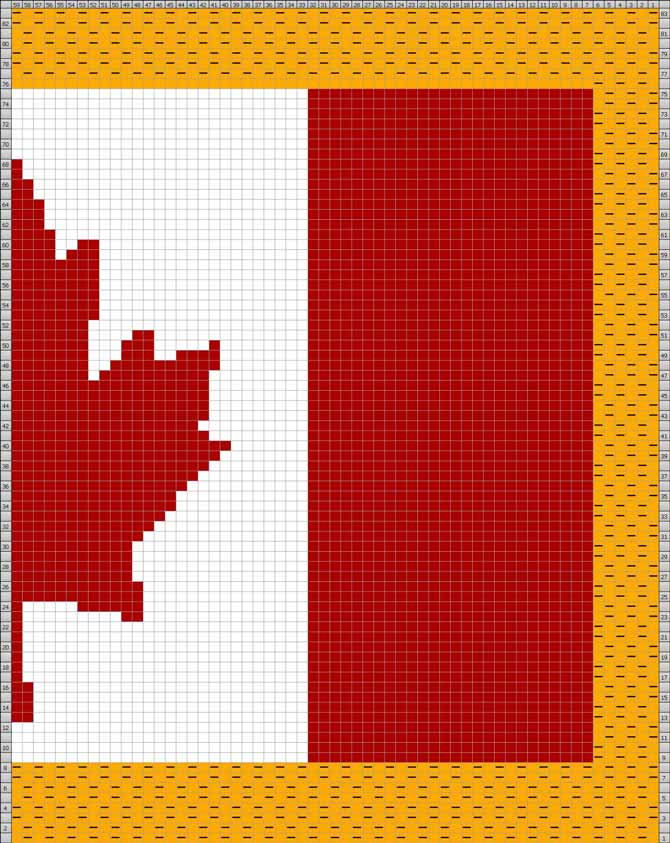 Have a happy Canada Day!

Tomorrow’s post is going to examine weaving in all those ends that will be created from making this pattern.

This is part 2 of 5 in this series.
Go back to part 1:  Celebrate Canada – knit a Canadian flag

Go to part 3: Taking weaving in ends in knitting from home made to couture

Taking weaving in ends in knitting from home made to couture

A .pdf version of the Canadian flag pattern is available on Cynthia’s website, http://www.cgknitters.ca

Hi, I am wondering how big your finished flag is? This is the best Canadian flag design I’ve seen & I want to incorporate it in another design that I want to try.
Thank you

[…] the last two weeks, I blogged a pattern (chart) for knitting a Canadian Flag. Already, this post has got some […]

6 Benefits of Using Scrubby Yarn in...